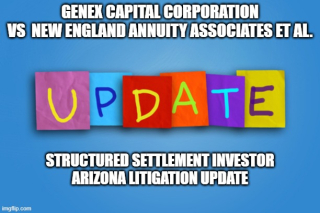 On February 24, 2020 and April 3, 2020, Genex provided notice to the Keefers of the alleged default resulting from the reassignments of Payment Streams to NEAA without Genex’s consent. The notices required proof that the reassignments had been reversed within twenty days. In order to avoid a dispute, the Keefers and NEAA revoked the reassignments. Genex asserts that the Keefers did not respond to the notices of default. Genex alleges that it terminated the RPAs, repossessed the rights to the Perdun Payments and Duran Payments, and reassigned them to new investors.

The parties’ motions for partial summary judgment are summed up in the following questions:

(1) What are the Keefers and Genex’s rights and interest in the Payment Streams?

(2) Did the Keefers have the power or right to reassign the Receivables?

(3) Did Genex have the right to terminate the RPAs?

Rights and Interest in the Payment Streams

The Court reasoned that plain language of Section 3.1 of the Genex RPA and Schedule E are clear that Genex transferred all of its right and interest in the Receivables. The Court found that the Keefers are entitled to a declaration that they are the owners of and have the right to receive payments arising from the Payment Streams and that Genex has no material right, title, or interest in the Keefers’ Payment Streams.

The Court further reasoned that although the RPA is clear regarding the Keefers’ interest in the Payment Streams, the RPA is equally clear regarding restrictions on reassignment. Section 3.4 of the RPAs states: “Buyer shall not have the right to further assign or sell the Receivable and must keep the Receivable for the balance of its term unless otherwise expressly approved by Genex.” SOF, Ex. 1, RPA § 3.4. The Court found that Genex is entitled to a declaration that the RPA does not permit reassignment of the Receivables without Genex’s consent, but denied all other relief.

I've previously reported about the 2020 amplification of paragraph 3.4 of the Genex Capital Receivables Purchase Agreement, which appears to be an attempt by Genex Capital to address the reassignment issues that gave rise to the litigation and makes clear the potential consequences to investors in block capitals.

A prospective investor would have to agree to such terms (as well as the rest of the terms) of the latest version of the RPA, if entering into an RPA with Genex to buy receivables  (e.g. structured settlement payment rights).

Based on the disputed facts, the Court declines to enter summary judgment in favor of Genex declaring it had the right to terminate and/or void the RPAs.

Even if the Court concluded a material breach occurred, Genex’s remedies are limited to those set out in the RPA. Genex may have a claim for breach, but Genex does not obtain any right, title, or interest in the Payment Streams or the right to withhold, sell, or reassign the Payment Streams as a result of the Keefers’ breach and default. Genex’s remedies in the event of the Keefers’ default are as follows:
(a) terminate the Agreement in respect of the Receivable Transaction in question by Notice delivered to the Buyer on or before Closing. In such case Genex shall be entitled to keep any funds deposited by Buyer by way of liquidated damages and not as a penalty; and/or
(b) enforce specific performance of Buyer’s obligations under this Agreement; and/or
(c) terminate the Agreement generally; and/or
(d) bring an action in law or equity to recover damages for the default, including Genex’s reasonable costs and attorney’s fees. Genex shall have the right, but not the obligation, to mitigate its damages.   [Under Advisement Order 6/7/2022 p9]

Obviously there is more to come in this litigation which continues to be instructive of the transactional risks of investing in structured settlement payment rights, or subsets of those rights.

I, for one, continue to be grateful for Mr. Proctor's introduction of the term "subset" to refer to portions of structured settlement payment rights acquired by investors that are being serviced. [Proctor Declaration of 1/3/2022]

The RPA defines “Annuity” as “a payment or set of payments paid over a fixed term by an insurance company arising from a structured settlement, lottery prize winning payment or other annuity.” SOF, Ex. 1, RFP at 3. “Receivable” is defined as “all or such part of the payments from an Annuity which Buyer has agreed purchase [sic] under this Agreement as set out in a Request.” Id. Other language from the RPA also supports the conclusion that the distinction between “Receivable” and “Annuity” is immaterial.  [ Under Advisement Order p 7]

While the judge references a defined term "annuity" in the RPA and that the distinction between annuity and recevable is immaterial, acquired structured settlement payment rights are not considered annuities or insurance products  [ NAIC Statutory Issue paper No. 160, finalized April 6, 2019] and the definition of annuity under the insurance laws of many states is inconistent with what Genex Capital or similar companies are selling to investors. For example,

So, to boil it down:

When "Re-" precedes any word, it suggests something has been re-done, re-manufactured or even re-structured. Think of a retread tire. Someone patches up an unroadworthy balding tire, re- treads it and out it goes onto another car.  The end product is still a tire!

For the benefit of consumers, let's keep the structured settlement information highway clear of inaccurate terms.