What is the Terrence Taylor Case All About?

According to the complaint filed in the lawsuit filed February 26, 2015, the Taylor case "is about the systematic raiding of structured settlement funds through acts of fraud, misrepresentation and negligence that has left a seriously injured amputee burn victim without any means of supporting himself or his dependent child. The suit against 123 Lump Sum and the other defendants is to recover damages for statutory violations of the Virginia Structured Settlement Protection Act, Title 59.1, Chapter 41 ("Virginia Structured Settlement Protection Act"), and common law instances of negligence, fraud, and misrepresentation, which, through a series of transactions, wrongfully stripped Plaintiff Terrence Taylor of his structured settlement annuity in violation of the Virginia Structured Settlement Protection Act and the Court's order (the"Dismissal Order") in the act in the action styled Terrence E. Taylor, a minor, by and through his mother and next friend, Louise W. Taylor, et. al, Plaintiffs v. DeLonghi, S.P.A., et at., Defendants (Civil Action No. 89-0971-A (U.S.D.C.,
Eastem District of Virginia, Alexandria Division) which incorporated the terms of the settlement
agreement entered into by Plaintiffs in resolution of their personal injury claims".

"In 2012, structured settlement factoring companies began contacting Terrence Taylor about selling his periodic payments Terrence entered into many ill-advised and improvident agreements
to sell his periodic payments and as many as eleven (11) suspect transfer orders were granted which
resulted in Terrence selling off all of his"guaranteed" periodic payments at steep discounts to their
present value. Terrence was even convinced to sell off many of the life contingent payments under his structured settlement annuity that are only payable to the extent Terrence remains alive on or
after 2026. In just over 24 months, eleven (11) transfer orders were granted in the
Commonwealth of Virginia", (10 out of 11 in the same court, most of which were submitted by the same attorney, Portsmouth VA councilman Stephen E.  Heretick, and approved by the same judge**, Dean W. Sword, Jr.),  "which effectively divested Terrence of all of the financial security that was carefully provided for, and designed to last for his entire lifetime, under the Settlement Agreement and Dismissal Order of the same Court as agreed to and so-ordered in 1989"

[  Note: ** while some say that judges don't have information about prior transfers that simply could not be the case here since the majority of the transfer applications were filed on the same Portsmouth docket.]

According to Terrence, as set forth in the Complaint,  a representative named Alex told him that Defendant Bexhill, and its agent. Boca Raton based Client First (Funding) were affiliated with Wells Fargo, a nationally recognized banking institution. Alex told Terrence that he could invest the money he received from doing this transfer with Wells Fargo. Alex told Terrence it would be crazy to pass up this deal.   [Complaint at #62]

Alex convinced Terrence that Wells Fargo would double his money if he did the
proposed deal with Defendant Bexhill and its agent. Client First.  [ Complaint at #63]

In order to induce Terrence to do the deal with Bexhill and Client First, Alex accompanied Terrence to strip clubs, flew him to Florida and encouraged him to spend money recklessly. Alex took Terrence grocery shopping, to the movies and out to dinner at restaurants. Alex encouraged Terrence to spend even more lavish sums of money on women and gambling so that Terrence would "need" to sell even more of his structured settlement annuity payments to pay his debts, which would qualify Alex to eam
additional commissions. [ Ibid.]

"Alex told Terrence that it would be a bad idea for him to seek advice from an
independent advisor such as an attorney. Alex said that Terrence would get his money quickly if
he just signed the paperwork without independent professional advice".  [ Complaint at #65]

Side Bar: The Client First / Wells Fargo connection needs to be investigated, in my opinion.  This is the second case that I have encountered where these two companies seem to be connected or aligned in some way.  Whether that is a lead generation agreement, joint marketing agreement or whatever,  in January 2014 in conjunction with my initial investigation of the "Mr D. case"  (see following post) Client First CEO Burt Kroner freely referred me to Jeffrey Lewis Eglow, until March 1 2015, a West Palm Beach financial advisor with Wells Fargo, to discuss investment suggestions made to "Mr. D" for the proceeds of the sale of all of  Mr D's $62,000 annual income stream from his structured settlement,  that I was questioning.  During the conversation I had with Eglow he admitted to me, among other things,  that the introduction to "Mr. D" came from Client First.   When "Mr. D "contacted me on December 31, 2013,  he was under the impression that an individual with the surname Escobar was a representative of Wells Fargo and had even contacted Wells Fargo to speak with Escobar. I subsequently learned that Escobar worked for Client First.

These instances and advertising messages of others raise a question about something I am particularly concerned about. Have there been instances where unlicensed persons, working for cash now pushers, who are providing financial or investment advice and/or providing advice that is unsuitable and/or violating any applicable securities act in conjunction with the solicitation of impaired persons who are receiving structured settlements?

The First Count is Statutory Violations of the Virginia Structured Settlement Protection Act by Transferee Defendants.

Petitions were filed with statements by the Defendants that said that "the transfer was in the best interest of Terrence " and judges approved the transactions.

How could ALL of these transactions have possibly been in Terrence Taylor's best interest and that of his dependent child? 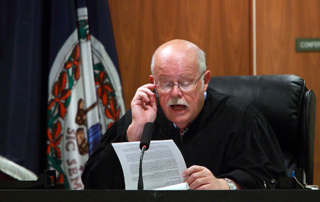 In February 2007, the Portsmouth Circuit Court judge Dean Sword, Jr. appeared in jeopardy of being stripped of his job after a tumultuous, 2-1/2 -hour hearing in which he was accused of being intemperate, rude to attorneys and hostile to plaintiffs in civil cases. Instead he kept his job and was the judge who approved 8 of the 11 transfer orders for Terrence Taylor.