The Structured Settlement Secondary Market | Let's Be Honest About Size Shall We?

Accurate data about structured settlement factoring would be useful for legislators to understand how big the vastly underegulated structured settlement factoring industry is. Is it as small as one funder claims, or is it something that sticks out as the trade association says? I hate to be prickly about this, but what we have is a 20 percentage point disparity that doesn't inspire much confidence. So what is the truth? 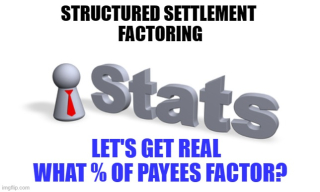 Has the amount of factoring expanded or contracted?  One thing we do know that there has been an expansion of consumer and investor litigation (and other questionable activity) in this area since 2013.

What drives such individuals and companies to engage in the bad behaviors to induce consumers? There has to be more than the proverbial lollipop as a reward.

NASP answers  "No, most people receive payments according to the original schedule. In the estimation if the National Association of Settlement Purchasers, "less than 20% of structured settlement recipients ever complete a Secondary Market transaction".   -NASP Secondary Market FAQ retrieved from NASP website October 2, 2022.

The Member of the Trade Association Answer

But Strategic Capital, which is a member of NASP, and sponsors a number of trial lawyer associations,  published a winky dink contradiction in its website's FAQ, implying that NASP is 20X too high.

Strategic Capital, based out of Toronto Canada, says:

2. Only about 1% of structured settlements are sold or traded in the marketplace.

"Only about 1% of structured settlements are sold or traded in the marketplace. That is still published October 2, 2022.

Patrick Hindert, author of the structured settlement industry's seminal text, Structured Settlements and Periodic Payment Judgments, stated in 2013 that there were $365M present value secondary market purchases. This number represented only 7.1% of new money flowing into structured settlement annuities in 2013. So we're looking at a "20 or 7 to 1".  People of a certain vintage might appreciate that it could be the " B" side to a "new release" by Chicago as a buzz cut from "25 or 6 to 4"

Stratcap's number seems a bit optimistic, er unrealistic. Prove me wrong, please. What would be nice to know is ...

Let's hear the real numbers, warts and all.  I would think that the trial lawyer associatons whose sposnor testimonial letters have been displayed on the Strategic Capital website should be interested in these numbers.

The National Association of Settlement Purchasers holds its annual meeting in New Orleans, in early November 2022. That leaves a month to get real on the stats of structured settlement factoring.  How about it?