The life insurance companies that issue structured settlement annuities really are a bunch of losers, compared to banks.

But the "losers" should be proud to be on the end of a 100-0 pasting as the second half kicks off. Last year the bankers showed the life insurance industry something and REALLY ran up the score, shellacking the structured settlement companies  by the score of 140-0. The bankers also had more modest "clean sheets"  against structured settlement companies the year before and a year before that.

The evidence shows that life insurers issuing structured annuities have had no failures during the same time period. Life insurers on the whole have stood the test of time.

But things are looking up! CNN reports that Q1 2010 was the most profitable quarter for banks (and other institutions) insured by FDIC in over 2 years.

It had to happen eventually. The closing of a Florida bank and 6 others on Friday by the FDIC brought this year's number of bank failures to 106 . There have been a total of 130 failures since the beginning of 2008. Even so the number of failures has not reached the number of failures in the 1980s S&L crisis.The savings and loan crisis in the 1980s and 1990s saw the failure of 745 savings and loan associations (Source : Wikipedia)

The Wall Street Journal has published a helpful chart from the FDIC which presents a geographic distribution of failed banks.

Since the beginning of 2008 no structured annuity issuer has been taken over by a state insurance department.

The North Carolina Lawyers Weekly reported on August 17, 2009 that on August 7, 2009 North Carolina governor Bev Perdue signed legislation that will add an extra layer of security to those receiving payments from structured settlement annuities.

The legal publication reports that the N.C. Life and Health Insurance Guaranty Association, which provides coverage if a member insurance company becomes insolvent, has increased limits from a maximum of $300,000 to $1,000,000 to North Carolina residents who receive payments from annuities that were purchased in connection with their structured settlement. The $1 million limit, which Millennium Settlements' Bryan Milner refers to as a "spare tire" in the article,  is the highest in the country. It also provides coverage for that amount to non-resident payees if the insurer that issues the annuity is domiciled in North Carolina and the state in which the contract owner resides has a guaranty association similar to the one in North Carolina.

While the aforementioned is good news what is particularly troubling is the possibility that structured settlement industry colleagues are breaking the law.

I was recently shopping for a new car. As part of showing me the features of the vehicle I was thinking about acquiring, the salesman discussed the "spare tire". Does a similar orientation violate the law when it comes to selling insurance? Would the use of a "spare tire" in an insurance sales presentation, earn you a "ticket", OR put a "flat tire" on your insurance career?

Will relying on THIS

in your insurance sales presentation, lead to THIS? 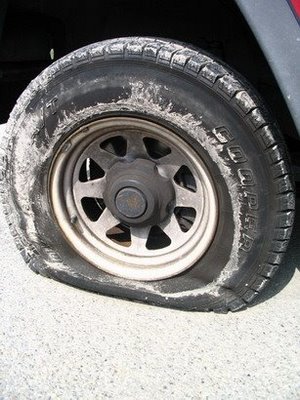 Structured annuity omcpanies are crushing banks during the Great Repression of 2008-2009.

Past performance is no guarantee of future results.

For the purpose of this observation "failure" is defined as shut down by the FDIC in the case of banks and taken over by state insurance departments in the case of structured annuity issuers.