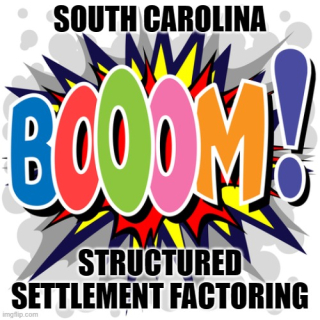 Pursuant to Article V, Section 4 of the South Carolina Constitution,

IT IS FURTHER ORDERED that all Clerks of Court statewide shall, within five business days of the date of this order, identify all pending matters involving structured settlements for which a Master-In-Equity or special referee has been appointed and forward a list of those matters to their respective Chief Judges for Administrative Purposes.

The provisions of this order are effective immediately and remain in effect unless amended or revoked by subsequent order of the Chief Justice.

refers to Powers of Chief Justice; Rules; Admission to Practice of Law and Discipline of Persons Admitted

The Chief Justice of the Supreme Court shall be the administrative head of the unified judicial system. He shall appoint an administrator of the courts and such assistants as he deems necessary to aid in the administration of the courts of the State. The Chief Justice shall set the terms of any court and shall have the power to assign any judge to sit in any court within the unified judicial system. Provided, each county shall be entitled to four weeks of court each year and such terms therefore shall be provided for by the General Assembly. Provided, further, that the Chief Justice shall set a term of at least one week in any court of original jurisdiction in any county within sixty days after receipt by him of a resolution of the county bar requesting it. The Supreme Court shall make rules governing the administration of all the courts of the State. Subject to the statutory law, the Supreme Court shall make rules governing the practice and procedure in all such courts. The Supreme Court shall have jurisdiction over the admission to the practice of law and the discipline of persons admitted.

One reasonable reaction is that plenty of people who really need the money are going to get screwed now.

Weren't many of them already being screwed by the bad behavior that led to the the bombshell reports in South Carolina?

Murdaugh and Mayhem | Client of Color Ripped Off Then Factoring Cos. Churned His 6 Children's Structures 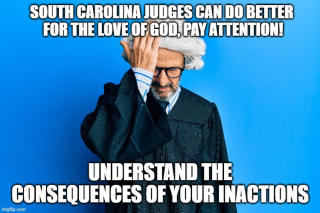 trail leads to Alex Murdaugh, Palmetto State Bank and then pivots to more huge problems with enforcement (or lack thereof)) by judges that seems to need a smidgen of rubbing their noses in the consequences of their inactions and apparent lack of effort. And then a surprise connection of dots.

Alex Murdaugh, along with former Palmetto State Bank CEO Russell Laffitte, quietly stole more than $1.3 million from Donna Badger's estate, where the 2012 settlement money from a worngful death lawsuit had been placed, according to state and federal indictments.  Murdaugh faces 79 charges related to theft of nearly $9 million from clients, according to a May 2022 news report. Murdaugh was previously indicted for the murders of his wife and son in 2021.

More than $1.3 million had been set aside for him in his late wife’s estate from the wrongful death lawsuit. But he didn’t know it. Murdaugh, his attorney, never told him, according to a lawsuit Arthur filed in June. Instead, Murdaugh deceived Arthur Badger into resigning as the estate’s personal representative, while Laffitte took over, according to a complaint filed in June 2022 lawsuit against the pair and Palmetto State Bank. Then, Murdaugh and Laffitte settled the lawsuits against UPS without informing Arthur and his kids. The conspirators set up a fake structured settlement for Arthur through the bank and diverted the money at Murdaugh’s request, the complaint states.

The Badger children’s money, also received from the wrongful death lawsuit, should have been safe. Placed into financial arrangements called structured settlements, each child was to receive periodic tax-free payments — primarily in the form of monthly checks — once they turned 18. In total, $4.8 million would go to the six children over several decades.

The Badger nightmare continued as the Badger minor children's structures were allowed to be sold, approved by a judge who seems to be a favorite among several factoring companies, according to a months-long investigation by McClatchy. He hasn't denied a structured settlement transfer petition  (deal) a factoring company has brought before him during at least the past eight years, McClatchys found.

Concurrent with the announcement of the Maryland Attorney General of a number of Ryan Blank's associated companies being banned in Maryland for 7 years for fraud in January 2018, the Owings Mills Maryland native was the registrant of another entity, Pitchberg Funding, which had a hand in dismantling of the Badger children's structured settlements.

McClatchy was able to link Pitchberg Funding to Ryan Blank.  As we've previously reported and McClatchy reports as background to the Badger case, "the Maryland Attorney General’s Office banned Blank and several of his business associates in 2018 from doing business in the state after an investigation found they were acting deceptively in pushing structured settlement transfer deals through the courts. Blank and his partners sent thousands of mailers to structured settlement recipients that made false claims and used fake names, including a non-existent Judge Larry C. David, purportedly a reference to the famous comedian and creator of the TV show, “Seinfeld,” according to the settlement agreement outlining the investigation’s findings".

"The agreement notes that Blank and his associates dispute the findings but agreed to a resolution to avoid costly litigation. They were banned for seven years and ordered to pay restitution. Messages left for Blank and his associates were not returned. The Maryland attorney who represented them in relation to the Attorney General’s investigation also did not return a request for an interview. Arthur said he believed he was working with the same company for all of the transactions and the company representative’s signature on applications for Pitchberg and Berkman First Funding were the same. But that couldn’t be confirmed. All of the future payments were ultimately assigned to SuttonPark Capital, a Florida factoring company well-known in the industry for underwriting third-party transactions, meaning they fund other companies that solicit sellers and finalize these transactions. Representatives from SuttonPark also did not return messages seeking an interview".

The transactions involving the minor Badger children, representing a return of about 7 cents on the dollar, were among the most lopsided South Carolina deals reviewed by McClatchy, which compiled complete data for more than 1,400 transfers. There are several others that received a lesser return, including a Colleton County woman who was permitted to sell more than $1.6 million worth of future payments for $4,225 in 2019. But almost all of those deals involved life-contingent payments. That means those payments would only be distributed if the structured settlement recipient is still alive at the time they’re due. But all of the Badgers’ payments were guaranteed or certain, meaning that even if one of them died before a future payment was due, it would still get distributed to a designated beneficiary, or the Estate of the Payee as is customary if no beneficiary is designated. or not living at the time of a payee's death.

Arthur said in a July interview that he didn’t realize the dollar value of the future payments he had sold until a McClatchy reporter contacted his attorney, Mark Tinsley, wanting to speak with them for this story. South Carolina law requires factoring companies to get sellers to sign disclosure forms, listing the dollar amount they’re selling and receiving.

Blank and his partners in Maryland were found to have given sellers “insufficient time” to read terms and conditions before signing transfer agreements, according to the Attorney General’s investigation.

“I felt like I was robbed,” Arthur said about finding out he had given up millions of his children’s money. Tinsley was likewise shocked and skeptical a judge would sign off on such deals until a McClatchy reporter directed him to copies of the court filings online. “I don’t know what else to say; it’s just shocking to me, completely,” he said. It turned out the Badgers happened to live in the perfect county for factoring companies that want to get lopsided transactions approved.