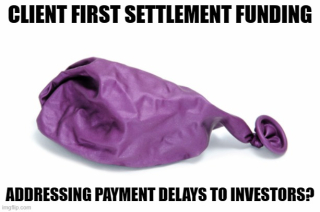 investors scrambling, with some having faced delays in receiving due to the apparent failure to timely employ a back up servicing company.

Investors Caught in the Back Wash

Then there are investors in structured settlement payment rights who had not received payments due them. Several payments were past due. In one of the cases an 80-something investor had, in 2009, invested in life contingent payment rights from a Symetra funded structured settlement.  Monthly payments had not been received for several months and the hold up was due to failure by the servicer to obtain proof that the original annuitant was still living. Symetra was apparently holding up payments absent this proof.Eventually the problem was resolved, but it certainly wasn't smooth. I understand from the investor that there is an effort afoot to get another servicer to handle the adminstrative tasks. The investor is a retiree in his upper 80s.  Twice a year now, a notary must go out and get proof of living from the original annuitant and provide to the Symetra, the annuity issuer.

Bankruptcy of Payment Servicer Was An Issue I Raised in 2009

In October 2009 I did a couple of podcasts for Legal Broadcast Network on the subject of how the bankruptcy of a payment servicing company would impact an investor in structured settlement payments rights.  The podcasts featured Bruce Akerly, a bankruptcy attorney from Dallas , Texas who conceded that even though things might turn out OK for the investor in the end, that there might be a delay and possibly legal expense to enforce/protect their rights. One month later the topic I raised was the subject of a presentation at the annual meeting of the National Association of Settlement Purchasers. A number of my sources in the secondary market claimed in the following months that they had servicers and back up servicers.

Burt Kroner is fighting an eight figure smackdown by the IRS in the 11th Circuit Court of Appeals. On February 28, 2022, Kroner filed a legal action in Plam Beach County Florida against the law firm that advised him on the deal that it is alleged gave rise to the IRS action. Burt Kroner, inidividually v Foley & Lardner LLP and Robert J. Bernstein,Esq., individually 502022 CA 001866XXXXMB.