Why Are Retirees Allowed to Be Victimized?

The Walls invested almost $153,000 of retirement money in factored structured settlement payment streams that were scam labeled annuities by those that sold them on the investment. Now after more than two years of litigation and a big legal bill, the Walls have $0, as the Western District of Pennsylvania has granted summary judgment in the favor of Altium Group on April 30, 2019. Download Wall v Altium Summary Judgment in Favor of Altium Group

This is the same investment that Altium Group advertised to the masses as having "Unparalleled Safety of Principal"  (see below,  Source: Internet Archive) 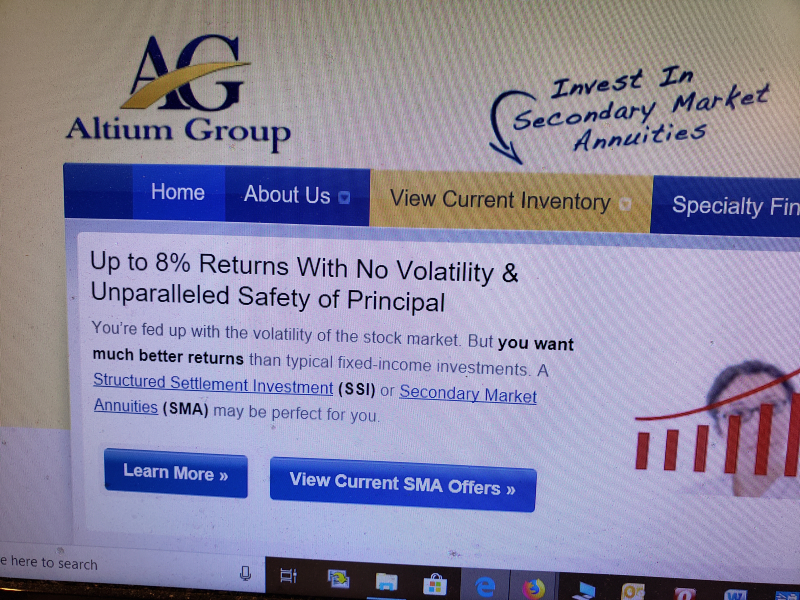 Corona Capital originated the deal in Florida, the factored payment stream was marketed to the Walls as a Secondary Market Annuity despite the fact that the investment was not an annuity. It turned out that the Corona originated deal was procured by fraud and the court order creating the factored structured settlement payment streams was vacated when the original annuitant filed suit. Now after a two year odyssey in which they are left with nothing but a pile of legal fees for their $153,000 investment one wonders what better job the legislatures around the country can do about regulating the structured settlement secondary and tertiary markets?

Maybe the FTC can look into claims against those advertising annuities that are not annuities.

As a result of the Wall case, Altium began to includes disclosures on its website. it no longer says "unparalleled safety" as they and others have done. But Altium, like a few other militants continues to use the scam label "secondary market annuities". In December 2018, the  National Association of Insurance Commissioners opined that factored structured settlement payment streams are neither annuities no insurance products.

If you are thinking about investing in Factored Structured Settlement payment streams, think twice!