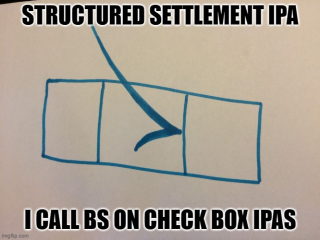 improvement after troubling findings recently appeared in Myrtle Beach Sun News, a McClatchy publication, and other regional and national press.

South Carolina sellers of structured settlement payment rights, who usually lack their own legal representation and may have received their settlements after suffering traumatic brain injuries, are selling their future payments to private companies, receiving an average of 25 cents on the dollar, according to the McClatchy. Until the troubling report was published, structured settlement transfer petitions were typically heard by masters-in-equity and special referees, who signed off on nearly all deals, including ones that do not appear to be in the sellers’ best interest, the investigation found.

“You’re going back before the same court to unwind the clock or prove to the satisfaction of the court that this is not predatory and/or inequitable to the ultimate holder of that future income stream.” Rankin, a Myrtle Beach attorney who chairs the Senate Judiciary Committee, said Beatty issued the structured settlement order after he shared McClatchy’s findings with the chief justice and asked him to put it on the State Supreme Court’s radar.

An order of the Chief Justice VACATED all pending orders referring structured settlement sales to masters-in-equity and special referees and requires clerks of court to forward lists of such cases to the chief judges in each circuit. A copy of the Order was included in a prior post.  Masters-in-equity are judges appointed by the governor who rule on non-jury matters — most often foreclosure filings and other real estate-related issues — referred to them by circuit courts. Special referees have the same powers as masters-in-equity, but are appointed by administrative law judges rather than the governor, and are not screened by the Judicial Merit Selection Committee.

How Should South Carolina Structured Settlement Protection Act and Others Be Changed?

According to The State, Rankin suggested that reviews by independent neutral guardians or attorneys should be required before sales.  This is a similar response to the blistering Minneapolis Star Tribune expose that was the impetus for change in Minnesota.As things stood prior to the expose, South Carolina did not even mandate Independent Professional Advice. Most states don't and it's a travesty that leads to reasonably forseeaable perils for the citizens of those states without the requirement.

The answer to that question is another question. How is it that there are so many stories in South Carolina, MInnesota, Florida, Texas, Virginia, Maryland (before the post Access Funding reforms) people who have sold umpteen times for pennies on the dollar in a very short time frame have waived independent professional advice?  A rapid sequence of transactions leading to financial ruin of people is not and can't be the intention of a structured settlement protection act.

What is an Independent Professional Advice (IPA) ?

Van Nuys, California attorney Eugene Ahtirski promotes his services as a "Structured Settlement Attorney" on a national basis. Here's how attorney Eugene Ahtirski defines an IPA:
"An IPA is an independent professional adviser who is separate from the factoring company that is buying a structured settlement from an individual. They are simply to write or sign an opinion letter stating that they have reviewed the transfer of the structured settlement and that it is fair and in the best interest of the seller".  Source: Ahtirski website September 20, 2022
Ahtirski does not limit the definition to providing legal advice, even though he is a lawyer. In fact it is not mentioned in the definition.
Independent Professional Advice and/or Neutral Guardians Should Be Mandated in South Carolina, and All States and should not be limited to attorneys.

Part of the problem with SSPAs, including South Carolina, is the 3 prong advice concerning the financial, tax and legal implications.

While some financial advisors cannot provide legal advice, one could also argue that a lawyer may not be qualified to provide financial or tax advice.  Furthermore, what a prospective seller may also need is someone with financial transition expertise, like a Certified Financial Transitionist.  A Certified Financial Transitionist (CeFT) is trained to help clients navigate through major life events and the financial transitions that accompany them. Lawyers and traditional financial advisors may be missing out on a key aspect of this process of financial transition—human emotion.  A neutral guardian has a higher standard and must seek out and collaborate with other experts to be able to properly evaluate if they do not possess the complete qualifications.
Furthermore the statement confirming that the person has received independent professional advice should be more than merely checking off a box and naming the adviser.  The adviser should provide a report that addresses each issue that they covered with the client and be free to express concerns if any.
One of the things that I mentioned in my 2015 White Paper on Structured Settlement Secondary Market Constructive Solutions,that has yet to be implemented anywhere, is a mandatory standardized sellers guide.  This should be a guide that is not created by the factoring company, but by a regulator, with input from stakeholders. There is nothing unusual about this. Anyone buying life insurance for example, must get a standard Life Insurance Buyer's Guide. Given the serious impact on the welfare of sellers who may not have the ability toi earn income, why not those selling structured settlement payments?

Other Considerations for an Improved SSPA in South Carolina

As reported by The State, Luke Rankin  (R-Horry) also discussed

a potential limit on how many times a person could sell off pieces of a structured settlement.

Venue-shopping, where buyers of structured settlements can choose the county where they seek court approval, essentially ended with the Supreme Court order directing such cases to Circuit Court.

“This order will be the law of the land until it’s lifted or we deal with it legislatively,” he said.