Is an Investment in Structured Settlement Payment Rights Suitable for Injury Victims?

The market for structured settlement payment rights and other cash flows and receivables, like lotteries) became available to 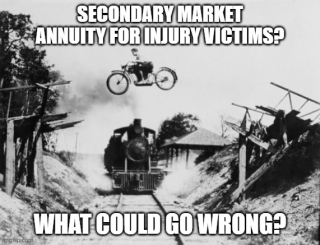 Are factored structured settlements of a risk profile suitable for injury victims?

individual investors as the result of the 2008-2009 financial crisis and grabbed the attention of individual investors (including plaintiff attorneys!) and their financial advisers, as alternatives for their IRAs and Pension Plans. Then some settlement planners began offering them to tort victims, including minors, one even swearing in an affidavit to a California court that there was "no change in funding asset". Another has used it in an Arizona case, a state that does not protect investments in other people's structured settlements in the event of insolvency, since Arizona adopted the Life & Health Guaranty Association Model Act (#520). The question is "are they suitable investments for tort victims"?

I submit to you that not every lawsuit plaintiff is unsophisticated. But, in the words of Elvis Costello "accidents do happen". When they do, the victims are the poor and the rich, young and old, the unsophisticated and sophisticated, the financially adept and the financially inept, as well as the risk averse and those with some appetite for risk. And there are those who have no business being in such investments.

What are Risks of Investing in Structured Settlement Payments Rights?

This author has had the opportunity to review an excerpt of a " Qualified Assignment and Release prepared by a settlement planning firm or one of its related entities. The Assignor was a qualfied settlement fund  (QSF), believed to be administered by a related company to a settlement planning firm that heavily promotes QSFs. The Assignee was an assignment company, related to the settlement planner.  The Qualified Assignment and Release lists the " Qualfied Funding Asset" as " Annuity" and the "Issuer of Qualfied Funding Asset" as Metropolitan Life Insurance Company. Paragraph 12 of the QAR states " In exchange for "legal paymnet rights" pursuant to 5891 of the IRC, to the Periodic payments specified in Paragraph 15, Claimant hereby forever discharges the defendants and.or Respondents with regard to the Periodic Payments, and agrees to only look to (settlement planning firm's related assignment company) for satisfaction of the obligation to pay periodic payments. Paragraph 13 of the QAR prepared by the settlement planner's related firm states " In the event of notice of an application to any court for the transfer of structured settlement payment rights established under this agreement, (settlement planner's related assignment company)  reserves the right to  transfer the ownership of the  "Qualified Funding Asset(s)". Upon the transfer of ownership to Claimant and/or Payee this contract shall terminate".  This author has confirmed with MetLife that it does not sell structured settlement annuities to anyone other than a self-insured defendant, an insurer that wants to buy-and-hold, or it's own qualified assignment company.

5. May not be any coverage under statutory insolvency schemes Structured settlement payments rights are not covered under the statutory insolvency streams in a majority of the United State, whereas they might apply to legitimate insurance products. As of March 2022, 34 states had an express prohibition, 2 states were considering it and the NAIC is pushing to have all 50 states fall in line to adopt the 2017 Revisions to the Life & Health Guaranty Associations Model Act (#520) which introduced the exclusion. The scary thing for any investor in structured settlement payment rights is that the Model Act, adopted by 34 states so far, has a retroactive application, so you're not safe if you bought the investment before the eventual effective date of the adoption of the 2017 Revisions (#520) in your state. Most states have a prohibition on advertising the existence of said funds in sales presentations. However, some of the actors soliciting investors in structured settlement payments are not licensed to sell annuties and operate in no-man's land, promoting the investments as annuities, which they are not, while "violating" a law that would apply to them if they were licensed to sell legitimate annuities, which many are not.

7. Transactional Risk There is originator risk (think Access Funding, Barry Cooper among those whose payments were scheduled to begin and never did. They were suspended due to competing claims),  forgery (happened in 200 cases in New York and Florida, forgery by a law firm paralegal in New York and by a lawyer in Florida) and imposters (Wall case-retirees lost $152,000). In 2018, a whole slew of investors in "secondary market annuities" were noticed as creditors in the Woodbridge Structured Funding/Woodbridge Wealth bankruptcy (2018). The Barber case in Allegheny County PA, involved a raid on a minor's structured settlement and forum shopping by the originator.  One of the investors was a California settlement planner with retirement funds who found himself competing with an 18 year old for the payments when they came due.  Very unfortunate and it could have been any retiree. The deal in which the California settlement planner invested was originated by a company controlled by the current President of the National Association of Settlement Purchasers.

9. Currency Rate Risk (To Foreign Investors) Payments are made in US dollars.

10. Liquidity Structured settlement derivative investments may need to be held to term and are not liquid.  Complex litigation between a structured settlement factoring company, investors and an intermediary pending since 2020 in Maricopa County Arizona and branching out into other states provides an illustration of what can happen. Genex Capital is litigating against multiple investors who it alleged breached its Receivables Purchase Agreement(RPA) when they sold their receivables and did not obtain Genex's consent or go through Genex. According to a Motion filed by Genex in Castro County Texas

" When Genex discovered that the Leonard IRA had wrongfully attempted to reassign payments to NEAA it issued a default notice, which went unresponded. It is uncontroverted that Genex confiscated the payments and reassigned them to other investors as it was expressly permitted under the Leonard IRA RPA"  In Re: Juan Oltivero  In the District Court of Castro County Texas Cause No. B9545-1211 Genex's Motion to Strike, Motion in Limine...Filed May 23, 2022 441pm

Some of the above risks are similar to the purchase of most fixed income annuities. However, most purchases of fixed annuities do not require a court order to be concluded, have such an exposure to transactional risk.

So is an investment in structured settlement payment rights appropriate for tort victims?  In rare circumstances, and then only after very careful deliberation.

So, to boil it down:

When "Re-" precedes any word, it suggests something has been re-done, re-manufactured or even re-structured. Think of a retread tire. Someone patches up an unroadworthy balding tire, re- treads it and out it goes onto another car.  The end product is still a tire!

For the benefit of consumers, let's keep the structured settlement information highway clear of inaccurate terms.