Only months into his conviction and sentence, meted out AFTER he pled guilty, crooked Joey Gargan, a former owner of The Pension Company, Inc, who ripped off the US government (and its taxpayers) and a New York Hospital for a collective $8 million, seeks compassionate release for a range of ailments that are of public record at the time of posting. His first swing of the bat was denied by Eastern District of Virginia Judge Rossi Alston in May 2021.

Gargan spends his days and nights in an oncology ward at FMC Butner in North Carolina (among other things he has prostate cancer) while he continues to fight for compassionate release fearful of Covid-19, something that is consistent with his pre-sentencing appeal.

Gargan falsely claims in a letter (excerpt below to the Judge that "no individual was harmed by his acts".

Gargan states that he used the purloined funds to save the company from bankruptcy after an employee's oversight imperiled the company. He claims that he was in the process of restoring the funds and prior to the discovery of his crime, had already repaid $700,000, Gargan also claims that as of September 27, 2021 he had repaid an additional $1,100,000. 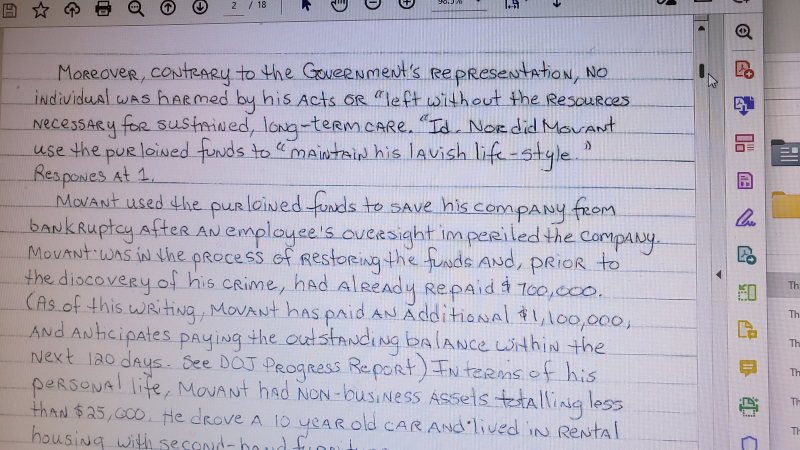 But crooked Joey isn't telling the whole story.  Gargan is not a petty crook robbing $950 worth of goods getting off with a misdemeanor.  It's a distorted reality in which Gargan ignores the fact that the taxpayers had to pay twice! The taxpayers had to make up for the funds that Gargan purloined!  Many of those taxpayers are individual people too Joey, eh?  Once the United States learned of Mr. Gargan’s embezzlement, it allocated new funds to purchase the agreed upon annuities for the victims. As a result, according to the DOJ Pre-Sentencing Report at ¶ 49, each of the settlement agreements listed in Count 1 have been fully satisfied (by the US. Government). However, the cost of annuities typically increase over time. The restitution amount owed to the United States reflects the increase in the cost to the U.S. Government to purchase comparable annuities for the victims.

In Gargan's own letter to the Judge Alston before he was sentenced in September 2020, Gargan said he never intended to skim money from settlement funds but did so initially to protect a long-time employee. He said that employee, while struggling with health problems, failed to lock in the purchase of an annuity for a plaintiff in an action titled Whitney v. U.S.A. As a result, the cost of the annuity increased by $100,000 as interest rates dropped, and eventually required the company to pay $1.2 million more than had been deposited. Gargan said he would have had to shut down his company if he filed a claim with his professional liability insurer. Gargan had to have known if he made a claim on the professional liability policy, his intentional acts would not be covered but uncovered in the investigation of the claim. So Gargan obviously thought of himself, rather than doing the honorable thing and fall on his sword. Gargan made the conscious decision to engage in his criminal activity.

While not part of the Federal complaint, Gargan also betrayed his own people. Gargan stole money rightfully earned by structured settlement brokers who were affiliated with The Pension Company, Inc.  We're talking hundreds of thousands of dollars! One former broker JW, has a substantial monetary judgment against Gargan, that I confirmed at time of writing still has not been paid.  For another example, see the 2020 complaint filed by James Brady claiming $200,000 in unpaid commissions Download Brady v Gargan Complaint.  There are still other former brokers who could cast shade on Crooked Joey's character and selective and misleading statement of omission to Judge Rossi Alston. Should compassion for a convicted confessed crook override compassion for victims, the individuals Gargan owes hundreds of thousands of dollars?

Gargan was indicted in June 2020 and pled guilty.  He claims in his beg for compassionate release to have lived like a pauper, but here is a link to a May 19, 2019 picture of smiling Joe Gargan in the midst of the scam, with a glass of wine at a Land Trust of Virginia charity event with his wife Susan Pope, Does that look like a "pauper" to you?  Does that look like "a very poor person"?

But the big question after reading Gargan's beg to Judge Alston is "where did the money go?"  Gargan's math just doesn't add up.