It's the time of Rapture. Not just THE Rapture, but 41 years ago last week, the last time inflation reached current levels, Rapture, 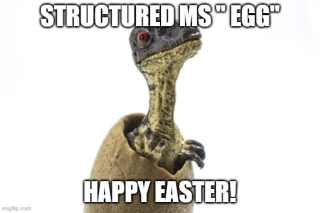 by Blondie was finishing up a two week stretch at #1 on the Billboard Hot 100.  In the Structured MSA "metaverse" there are no "Men from Mars eating cars and eating bars" but a blog from one company suggests that there is the Raptor, or Raptors, velociraptors to be precise, just like in Jurassic Park. Technically speaking however, in real life however, a Velociraptor was roughly the size of a turkey, considerably smaller than the approximately (6+1⁄2 ft) tall and 80 kg (180 lb) reptiles seen in the Jurassic Park films.

So, when a company writes in block capitals " THE BEST WAY TO SAVE ON MSAS MAY HAVE JUST BECOME THE ONLY WAY: STRUCTURES!" accompanied by the picture below, has ANYONE considered that it could be interpreted as "invasion of the turkeys"? 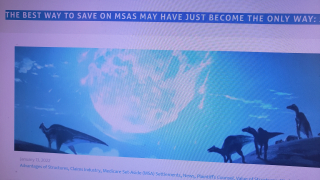 "Invasion of the Jurassic Turkeys"?

"In a study of the fossilized forearms of velociraptors found in Mongolia in 1998, paleontologist Mark Norell of the American Museum of Natural History found "quill knobs" - bumps where the feathers used for flight in modern birds are anchored to the bone with ligaments. His results were published in 1998 in the Journal Science.

"The more that we learn about these animals the more we find that there is basically no difference between birds and their closely related dinosaur ancestors like velociraptor," said Professor Norell.  The Guardian, Alok Jha, Science correspondent September 21, 2007
Velociraptors were " speedy thieves"
In 1924, Henry Fairfield Osborn, then-president of the American Museum of Natural History, named Velociraptor. He bestowed the name on this dinosaur, which is derived from the Latin words "velox" (swift) and "raptor" (robber or plunderer), as an apt description of its agility and carnivorous diet.    Source:  Velociraptor: Facts About the 'Speedy Thief' By Joseph Castro published March 18, 2016
Velociraptors did not hunt and packs
It's also worth noting that Velociraptors did not hunt in packs as the above picture suggests. Research from University of Wisconsin Oshkosh revolves around an analysis of raptor teeth that shows Velociraptors did not hunt in coordinated packs. "Raptorial dinosaurs often are shown as hunting in packs similar to wolves," said Joseph Frederickson, a vertebrate paleontologist who led the study with Michael Engel and Richard Cifell.
Facing Bemusement with Amusement
When promoting Structured MSA, the devil is in the details. You know "a picture tells a thousand words".  A Structured MSA has tremendous benefits, but a mural of "scary turkeys" known as "speedy thieves" in the scientific community, does not showcase the characteristics that I would have in mind to promote them.  How about you readers?