"Synergy’s Purpose – Protection of the Vulnerable". 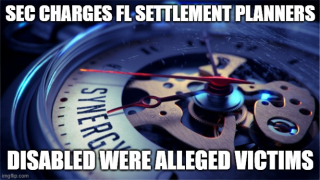 Lazarus, Esq., both based in Orlando, FL, and President Anthony F. Prieto, Jr. of Tampa, FL, for allegedly defrauding individuals with disabilities into believing that the individuals were placing their funds in a pooled trust managed by a non-profit association. According to the SEC’s charges, the defendants instead used a non-profit trustee as a shell company to profit from disabled personal injury victims.

The SEC alleges that Lazarus and Prieto formed the Foundation for Those with Special Needs, Inc. as a non-profit company to “assist personal injury victims with special needs.” The defendants, however, concealed from the beneficiaries, the Internal Revenue Service, and the Social Security Administration that they diverted at least $775,000 in trustee and joinder fees directly from the beneficiaries’ accounts to their for-profit business, Synergy. The SEC also alleges the defendants improperly used funds from deceased beneficiaries’ accounts to reimburse themselves, sponsor events and parties, and promote Synergy’s for-profit business. Synergy, Lazarus, and Prieto allegedly also did not tell beneficiaries they were investing beneficiaries’ money in a certain class of mutual fund that doubled the fees the beneficiaries were told they were paying.

According to the Complaint, it has been alleged that the Synergy Defendants have misrepresented to potential trust beneficiaries that they would be joining a trust managed by a non-profit association under Section 1396p, and therefore would remain eligible for Medicaid and SSI benefits. To the contrary, the Complaint alleges, because Synergy, Lazarus, and Prieto operated and managed the trusts for their own profit, they created a situation where the trust funds could count as beneficiaries’ assets and
jeopardize their Medicaid and SSI benefits.

“We allege that Synergy Settlement Services and its executives took advantage of vulnerable victims with special needs, making unethical and illegal profits off of them,” said Eric I. Bustillo, Director of the SEC’s Miami Regional Office. “The alleged greed Synergy and its executives displayed, treating themselves and clients to golf tournaments and beach parties using a sham non-profit company, betrayed the trust of their victims.”

The SEC’s complaint charges Synergy, the Foundation, Lazarus, Prieto, and Special Needs Law Firm with violating the antifraud provisions of the federal securities laws. The SEC’s complaint also charges Synergy, Lazarus, and Prieto with violating the registration provisions of the federal securities laws. The SEC seeks permanent injunctions and disgorgement of ill-gotten gains plus prejudgment interest against all defendants, and civil money penalties against all defendants except the Foundation.

The SEC additionally charged registered investment adviser True Link Financial Advisors, LLC, headquartered in San Francisco, CA, and its CEO, Kai H. Stinchcombe of Healdsburg, CA, in their role as investment and asset manager for the pooled trusts. True Link and Stinchcombe agreed to settle their case in a separate cease-and-desist proceeding without admitting or denying the findings that they caused certain violations of the antifraud provisions of the federal securities laws. True Link and Stinchcombe agreed to pay $200,000 and $20,000, respectively, in civil money penalties.

The SEC’s investigation is ongoing and being conducted by Jeffrey Cook and Jordan Cortez.  The case is being supervised by Eric Busto and Glenn Gordon, and the SEC’s litigation will be led by Robert Levenson and Alice Sum under the supervision of Teresa Verges.

Source: SEC Press Release 2022-76 and the SEC Complaint against the Synergy Defendants

How these alleged fraud charges by the SEC will impact Synergy Settlement Services its staff and partner settlement planners remain to be seen. Synergy is a provider of settlement planning services such as lien resolution. More than a decade ago, Synergy began marketing what was known as a "Settlement Asset Management Trust" or "Sam-T", an early settlement planning industry foray into alternative asset allocation to create income streams in spendthrift trusts. The SAM Trust pooled factored structured settlement payment streams (purchased by the SAM Trust) from sources in the secondary and tertiary structured settlement market. It's not clear if Synergy is still doing so.

Lazarus, is a member of the Florida Bar, an accident survivor himself and the author of the book "The Art of the Settlement". Earlier today Lazarus resigned as President of the American Association of Settlement Consultants after only a few months.