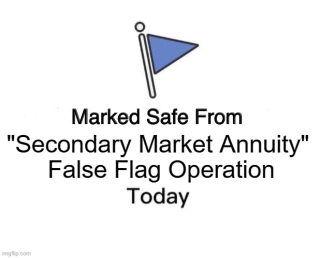 Mark yourself safe from the Secondary Market "Annuity" false flag

"Secondary Market Annuity" is a false flag originally used in the tertiary market to appropriate the imprimatur of annuities to market an investment that isn't an annuity to advisors (including certain settlement planners) who then market the instrument to investors, including injury victims.

How big of a problem is this?

In the early days some tertiary market companies even used the names and trademarked logos of insurance companies they competed against to market the imposters.  I recently reported discovery online of a California settlement planner's declaration under penalty of perjury to the California Superior Court that misrepresented such investments as "not changing the funding asset" in a comparison to a term more familiar to a judge "structured settlement annuities". That declaration was made in 2012 and it was a lie. It was reasonable and logical to wonder how many other times that California settlement planner made the same statement under penalty of perjury for the same purpose.

Is it ethical for any settlement planner to use the term Secondary Market Annuity when marketing factored structured settlement payments streams in any context in 2021?

The National Association of Insurance Commissioners expressly provides in Statutory Issue Paper No. 160  (adopted April 2019) that factored structured settlement payment streams are neither annuities nor insurance products. Rights do not equal annuity.

Western United Life Assurance Company v. Hayden, 64 F.3d 833 (3rd Cir. 1995), then-Judge (later U.S. Supreme Court Justice) Samuel Alito, on behalf of the Third Circuit Court of Appeals, repeatedly pointed to the difference between rights that a payee has to future payments under a settlement agreement and the lack of rights of a payee under an annuity purchased by the obligor to fund such payments.

On November 2, 2015, late Congressman Elijah Cummings (D-Maryland), then ranking member of the House Oversight Committee, sent a letter to Thomas Burgess Hamlin CEO of  Somerset Wealth Strategies   significant for the including the question of whether “secondary market annuities” are  regulated annuities under Maryland State law; what disclosures are made  to purchasers of these “annuities;” the profits made by selling or mediating the sale of these “annuities.”

In a March 29, 2017 decision in Greenwald v Caballero-Goehringer,  Delaware Superior Court C.A. No. K14C-04-027 JJC.   a  Delaware Superior Court judge rejected an attempt to portray structured settlement payment rights as an annuity, stating. "The proposed "structured settlement" was described in the Third Petition  as a structure to be purchased through a third party to be facilitated  by a Houston, Texas law firm. The "annuity" proposed by the Petitioner  was in fact a "receivable purchase agreement" which involved purchase of  the rights of payment of a structured personal injury settlement from a  California injured party having nothing to do with this case. In other  words, the annuitant in the proposed plan facilitated by the Texas law  firm was the California claimant, not the Minor. Furthermore, despite  the Petitioner describing The Hartford as providing the annuity, the  seller of the receivable purchase agreement was Genex Capital. No rating  was provided for that entity in the petition. The Court denied the Third  Petition, without prejudice"

In its June 11, 2021 answer to a Complaint in a pending Arizona case, Genex Capital Corporation made an important distinction between direct assignment of structured settlement payment rights and the acquisition of "subsets" of those rights.

Read Investing in Structured Settlements | A Guide For the Unwary 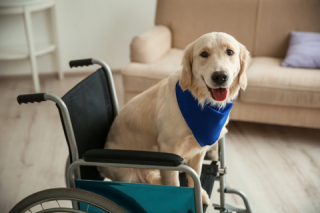 The ALJ found that Plaintiff’s lawsuit was “largely based on the premise that he had been injured by [the] loss of his service dog, Daisy, beyond her replacement value,” and even if service animals were considered resources, the exclusion would only apply to the cost to replace the animal.  [see Dennis H., Plaintiff v Commissioner, Social Security Administration United States District Court, D. Oregon 6:17-cv-01563-MC]

The ALJ found that:

On Appeal to the United States District Court, District of Oregon, Plaintiff Dennis H. argued that the Administrative Law Judge (“ALJ”) erred by:

Plaintiff also argues that he received ineffective assistance of counsel because the ALJ erred in finding that none of Plaintiff’s settlement award was an excludable resource.

In a February 19, 2020 decision, the Commissioner of Social Security's decision was REVERSED and this matter was REMANDED for recalculation of benefits.

What is a "Resource" for Purpose of SSI?

A Qualified Settlement Fund is a fund, account or trust authorized by Treasury Regulation 1.468B-1(c). Under the regulation, each QSF must:

It has been said that "A qualified settlement funds are a great tool in litigation to 'park' money or create a tax free way station", which conjures up that at least quarter of a century old dilemma once pondered by 1990s slackers Wayne and Garth.  [Jeopardy question for readers born after 1985, "What is Wayne's World?"]  #mikemyersbeforeaustinpowers

According to Chris Lordan CPA, whose Minnesota firm administers qualified settlement funds,  "an independent, qualified trustee, often an accountant or a lawyer, is appointed to handle the trust. The trustee manages the funds, handles ongoing claim resolution, and works with the plaintiffs to determine the trust’s payout structure.The trustee also assures strict compliance with 468B and other regulations: without constant and careful oversight, the benefits of the qualified settlement fund may not be fully realized or even disallowed".

If it's a trust under state law, wouldn't any income and gains generated  by the investment of the assets in the trust be subject to tax on a state or federal level? Even money markets aren't paying zero these days.

One of the duties of a QSF administrator is to file tax returns for the QSF. For a New York QSF, this might include a Federal return, as well as fiduciary tax forms for New York state and other applicable taxing authorities.

The Single Claimant QSF horse has been dead for half a decade.  It made a lot of people very successful while it lasted and it's presence was one factor that helped bring the structured settlement industry closer together, in my opinion. 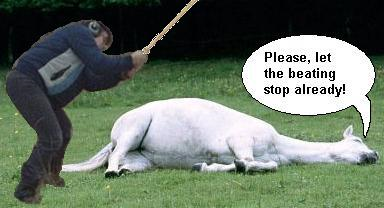 Most significantly, unlike the decade from 2000-2009, no structured settlement annuity providers currently accept Single Claimant QSFs.  Pat Hindert, in his review of a recent article by San Francisco tax attorney Robert Wood observes on his blog,  "they have effectively shut down this strategic personal injury settlement planning opportunity for a wide scope of actual and/or potential structured settlement cases". First of all "Get over it!"

Then it's time for a fact check.   A number of structured settlement annuity issuers who did accept qualified assignments from single claimant QSFs left the market place, such as John Hancock and Aviva. Were "they" responsible for that corporate decision?

In closing I may as well saddle up old "Pepper" for a short "trail ride" and reminisce.  Robert Wood observes the potential for abuse in qualified settlement funds. Wood "chucks" out this "acorn":

"QSFs allow plaintiffs and attorneys to defer the rec 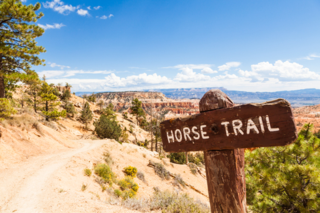 eipt of payments or the recognition of income until distribution. To some, that may seem to be an enticing proposition. Indeed, there is no antii-abuse rule in the statute or regulations, nor do there appear to be any rulings or cases that test the bounds of the concept. Thus, one might debate the potential risk that an aggressive plaintiff or aggressive counsel might use a QSF as an incorporated pocketbook. With no express time limit on the existence of a QSF, a plaintiff or his attorney might use a QSF to defer paying tax on a recovery indefinitely, letting the money sit in the QSF to earn interest and dividends, then doling it out when needed"

Indeed,  in QSF Symposium 2012-2, Hindert appeared to advocate the following as an advantage of QSFs. QSF's were touted as part of the "settlement planning standard"

"Plaintiffs can conduct their settlement planning with a sum certain, using their own advisers, free from the pressures of litigation, with unlimited time to analyze and address tax, investment and government benefit issues"

I questioned Hindert on October 3, 2012 with Do Qualified Settlement Funds Offer "Unlimited" Time to Address Investments?.  Never got a response.

The "trail ride" is over.  Goodnight "Pepper". 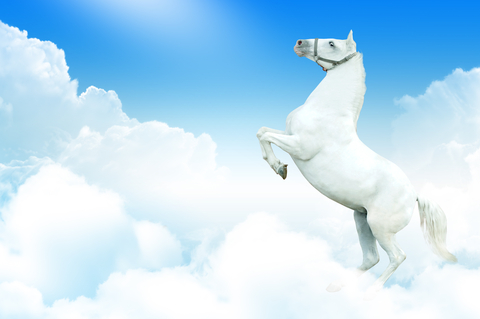 Postscript:  The qualified assignment company for Independent Life Insurance Company, which entered the market in 2018 will take assignments on Single Claimant QSFs.