Investors in Secondary Market "Annuities" have been hoodwinked. Years after investing perhaps tens or hundreds of thousands in 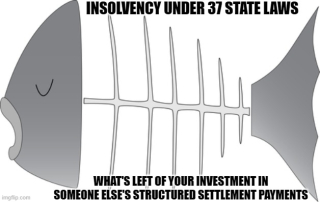 investments marketed to them as annuities, some are learning that they aren't in fact annuities and that the investors do not enjoy the protections they may have thought they had (or some case, may have been sold).

The Hammer is Coming Down

The hammer is coming down on the possibility of any investors in factored structured settlement payment rights, deriving any benefit from insolvency protections designed to protect buyers of annuities and life insurance. For many years it was not unusual to see the companies market investments in factored structured settlements using the false flag of "secondary market annuity". Some even made reference to state guaranty associations as through what they were selling to investors was actually an annuity. It wasn't, and had these companies (and/or their representatives) actually held licenses, the mere mention of the fund's existence in sales presentation might violate state law.

Arguably insurance consumers (including buyers of legitimate annuities) are also contributing to the insolvency schemes by virtue of the initial and/or ongoing payment of premiums for their insurance or annuities to the insurers that issue those products. However an investor who acquires structured settlement payment rights in the secondary or tertiary market is arguably, not contributing anything. The investor is buying a receivable, not an annuity or an insurance product. It's possible that the investor is buying a subset of rights to payments.

While the "pennies on the dollar" merchants may provide a service, history has shown that unethical business practices are rampant. With exceptions in a few states, these companies are essentially unregulated. In any case, neither factoring companies nor tertiary market companies contribute to the insolvency pot in the event there is an insolvency. Investors do not contribute to the pot either since they are not paying insurance premiums.

It's may not end well for investors. History has shown that many structured settlement factoring companies are very poor bartenders. Theye just keep pouring and pouring even after someone is obviously drunk. They often "bite off the head" the head of the victim's annuity first, figuratively speaking. That is to say they encourage the sale of guaranteed payments, sometimes leaving the annuitant with just life contingent payments way out into the future. Where does that leave a structured settlement annuitant?  Possibly needing public assistance.  Now the public sector (i.e. tax payers ) are affected.

Where does that leave the investor?

States Where Factoring Companies are Located

It's an interesting observation that the states where many structured settlement factoring companies are located have such exclusions [FL, DE, PA, NJ], having adopted the 2017 revisions to the Life & Health Guaranty Associations Model Act (#520).

One can further observe that states which have had some of the worst cases of annuitant abuse by structured settlement factoring companies have adopted the 2017 revisions [MN, FL, VA, IL, TX, NC, SC, MD, WA]. It's notable that several of what were for many years the leading purveyors of scam labeled "secondary market annuities" are/were based in Oregon, a state that has not yet adopted the 2017 revisions. It's a pity for investors that Oregon could not do a better job of regulating SMA Hub distributed payments to investors originated from from Advanced Funding and Access Funding as well as purported cash flows from professional athletes where things didn't go so well for investors. What is Oregon waiting for?

States Where Senior Investors Are Located

According to the US Census Bureau 2020 population estimates, 52 million Americans are 65 years or older, according to the U.S. Census Bureau, and a quarter of them live in just three states: California, Florida, and Texas**. While Florida and Texas have adopted the 2017 revisions, California had not done so at time of publication. Seniors with retirement accounts have been targeted for investment in factored structured settlement payment streams marketed under the false flag "secondary market annuity". What is California waiting for?

In response to my query, the Life Insurance Company Guaranty Association of New York responded June 9, 2022 that at present, there is no factored structured settlement exclusion under the New York insolvency statute.

Gullible and vulnerable New Yorker's have been preyed upon by Florida structured settlement factoring companies for years. New Yorkers are lured to Florida and other states under false pretenses inveigled in fraud to "establish residence" to circumvent the structured settlement protection laws of their own state, so they can get pennies on the dollar deals approved in Broward County, Palm Beach, Dade County Florida, Middlesex County New Jersey and even New Haven County Connecticut, when they had less chance of getting approved in New York. Despite the inducments to commit fraud, when called out in a legal dispute, the standard procedure is to attack the seller for being complicit in the fraud.  [ see, for example Philip Lape v 123 Lump Sum NY Sup. Monroe Cty E2020003377]

Investors in New York, Massachusetts, Oregon and Oklahoma, among others, have been victimized by frauds perpetuated by Dan Cevallos and the Advanced Funding.

Again, what is New York waiting for?

What If You Are An Investor?

If you were sold the rights to someone else's structured settlement directly, or as a subset of payment rights, and the financial advisor or settlement planner solicited your purchase using the term "annuity" or "annuities", I am interested in hearing from you.

**Which U.S. States Have the Oldest Populations? | PRB