Annuity Sold Claims to Be "Licensed to Purchase". It's Baloney

Greenspring Funding, claims to be licensed and qualified to purchase (structured settlement) payments in all 50 states  [see screen shot below dated today].

The thing is there is no licensing requirement to purchase structured settlement payments.  That is the problem and something the Washington Post touched on in its August 25, 2015 front page news story about Access Funding and Baltimore "Blacksploitation"  To wit...  "Rose, who spoke to The Washington Post on the condition that her full name not be used, had just tumbled into the little-noticed, effectively unregulated netherworld of structured settlements". (emphasis added) Perhaps it's time for the Brian "Frosh Pit"

In the past 3 years, the creators of Einstein Structured Settlements have been called out by the Structured Settlement Watchdog® for using paid fake testimonials pawned off as if they are real customers; advertising and trying to collect money for a settlement planning seminar at the Holiday Inn in downtown Chicago that never happened,  advertising false academic degrees to increase prestige.

The latest Ruddie/Blank company stunt involves a mismatched pairing of a vanity Hawaii phone number using the  808 area code with a map of Long Island. The 808 telephone area code covers the inhabited, developed and uninhabited areas of the Hawaiian Islands out to Midway Island and Wake Island. 808 was issued as Hawaii's area code shortly after its statehood in 1959  [ Wikipedia].

It appears that the Annuity Sold false advertisers are also plagiarists.  Annuity.org filed a complaint under the Digitial Millennium Copyright Act with Google, demonstrating how the material was copied.  A copy of the DMCA filing take down can be found at Chilling Effects.org. Richart Ruddie was sued for Conspiracy and Deceptive Trade Practices  in 2012, by Las Vegas sports betting giant Bill Walters, as part of litigation against companies and individuals that Walters said put up phony websites to trick gamblers into thinking they were buying betting tips from him. 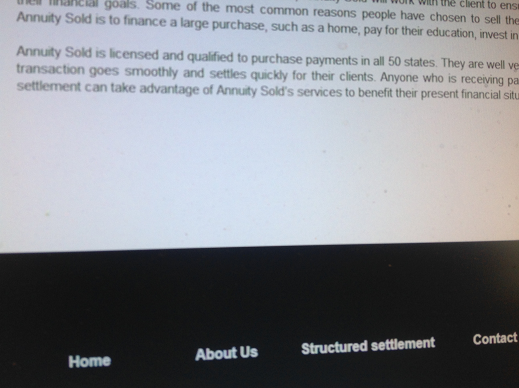 Offit Kurman, the Bethesda law firm that has been acting as defense counsel for David Springer and Sovereign Funding Group in the Woodbridge lawsuit has made a motion to withdraw as counsel due to the defendants' deadbeat status. In a January 8, 2014 letter to David Springer at 4095 Lomar Drive Mt. Airy MD, Elyse Strickland advised David Springer, the CEO of Sovereign Funding Group that she, Maurice VerStandig and Offit Kurman, P.A.intended to file a motion to withdraw as counsel.  Springer was advised that pursuant to Local Rule 101(2) of the United States District Court for the District of Maryland that unincorporated associations must have new counsel enter an appearance or be subject to a default judgment on all claims.

Elyse Strickland details David Springer and Sovereign Funding Group's failure to pay legal fees and costs incurred in connecton with the Woodbridge lawsuit pursuant to its retainer agreement. As of January 8, 2014, Springer and Sovereign Funding Group "have failed to pay multiple monthly bills, have accumulated  a substantial accounts receivable balance, and have given no indication that payment will be forthcoming". Download Offit Kurman to David Springer deadbeat demand letter.

A motion to withdraw as counsel of Sovereign Funding and David Springer was filed February 19, 2014 by Elyse I. Strickland and Maurice B. VerStandig, individually and on behalf of the law firm of Offit Kurman, P.A, in the United States District Court for the District of Maryland.

Offit Kurman is the second law firm that has represented Defendants David Springer and Sovereign Funding Group in the Woodbridge case.

Of note the motion states "for reasons Counsel is prepared to share in camera, should this honorable Court deem necessary or advisable, Counsel wishes to withdraw their appearance in this matter." Wonder what that's all about?

The motion also notes that "Sovereign Funding is not in fact a legal entity but is, an entity that is, or was controlled exclusively by David Springer".  (emphasis added)

The following March 5, 2012 screen shot of a segment of the SMFG Outlook, that was supplied to me by an informant on May 25, 2012, who labeled the image "David Screenshot". 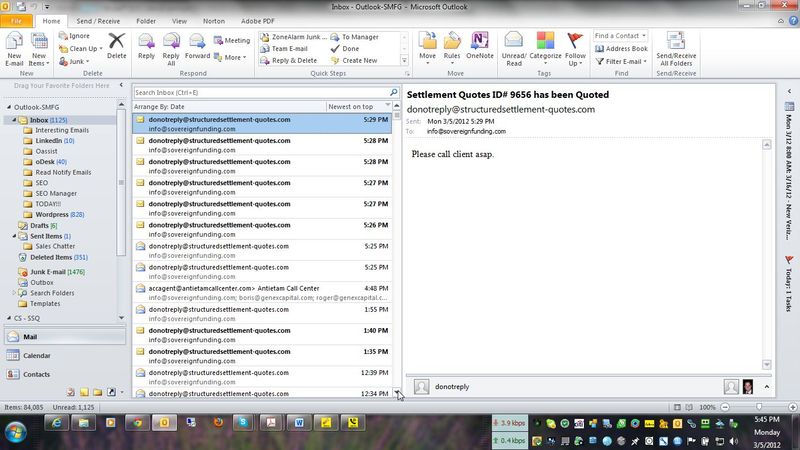 A search of the State of Maryland's online records made on the date of the April 3, 2013 post,  show it as still active (it was certainly active at the time the Woodbridge suit was filed) , with David Springer's wife Melissa Springer, a Columbia MD veterinarian, listed as owner. Download SMFG Maryland SoS records 4-3-2013

In my October 4, 2013 blog post, Sovereign Funding CEO Admits Was Imposter For His Wide Takes 5th When Asked Why,  I reported how in David Springer's June 28, 2013 deposition, Springer admitted to using his wife's name in an online forum beacuse he "was legally not allowed to work yet". I questioned why Melissa Springer's name was still being used over a decade later and pointed out that taking the 5th in a civil case does not have the same value as it would in a criminal case.