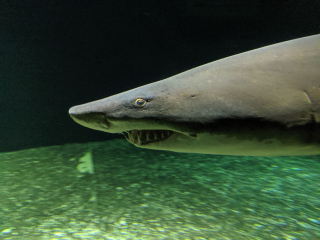 Avoid a nasty overbite of your payments, shop around for the best deal if selling your structured settlement    Source: Dreamstime  Baltimore National Aquarium

Professional Advice (IPA). But IPAs under Maryland structured settlement factoring reforms are not perfect as is evident by a recent case I came across.

Perhaps the IPA fee should be refunded

After the annuitant paid the IPA, the IPA actually signed off on a low ball offer from a structured settlement factoring company. The annuitant however, took matters into his own hands and was able to get competing offers that were 30% better than what the IPA signed off on.

The discount rate the educated annuitant negotiated is sub 5%!

It shows again, that if you must go down the road of parting ways with stable tax free structured settlement income you absolutely must shop around. Note that the company that low balled you in the first place might actually pay the most when in competition.

In a sign that unethical Florida structured settlement factoring sharks still target Maryland seals, the annuitant was being told to do the transaction in Delaware. In the process of gathering the names of these companies to submit to Brian Frosh, the Maryland Attorney General.

This is what the Better Business Bureau of Greater MD gives an A+ for:   Download David Springer Sovereign Funding endorsed fictional character James Goldstein he admitted 6-28-2013 to creating on Linkedin (May need to enlarge image to 300% after download)

The only other endorsement for "James Goldstein" is from "Sandy Jackson", another fictional character that David Springer also admitted to creating, which was used in public facing social media to promote the business of Sovereign Funding Group.

While David Springer has removed (or has had removed) the title "President Sovereign Funding" from James Goldstein's Linkedinprofile, the history has not been erased.

How would our education system look if school teachers gave an A+ to a student after becoming aware that a student was cheating?

What appears to be a diabolical campaign by Sovereign Funding Group is taking the structured settlement industry hostage on the Internet.

Here is the trademark information for "Pacific Life" and "MetLife" from the United States Patent and Trademark office.

Surely it cannot be ethical for Sovereign Funding Group to create (or have someone create for them) a "fly trap" to dominate search results in the manner shown in the Google search results above,  so that when someone clicks (in the example) on "Your info for Pacific Life Insurance Company in Texas" or "More Info on Pacific Life Structured Settlements" it leads to a factoring website connected to Sovereign Funding Group. I have spoken to Mr. Springer about this recently and yet the problems persist. What's up David?

This phenomenon is like a super virus spreading throughout the primary and secondary structured settlement market. A Google search for a Sovereign Funding competitor show that a whopping 80% of the first page Google search results point to the webuypayments,net website with a toll free number leading to David Springer's recorded message on voice mail.

It also appears that some of the listings will show 404 errors after multiple clicks, leading you to believe that these are inactive websites.

Whether you are a structured settlement broker, life insurer or a factoring company, be vigilant for use of your name and trademarks in the manner shown.

In November 2011,  Mount Airy Maryland's David Springer was sued by several competitors in the structured settlement cash now space. In April 2015, in his findings of fact United States Federal Judge Marvin Garbis, after due deliberation and consideration of the evidence and testimony at an August 2014 trial in Baltimore,  found David Springer liable to Woodbridge Structured Funding and tied David Springer to the webuypayments scheme.