SMA Hub solicited me to invest in a structured settlement derivative by email to today with the subject line "Annuities".

Neither SMA Hub, nor Trent Douglass, the individual whose email address at SMA Hub was associated with the solicitation are licensed to sell annuities or life insurance in Connecticut.  Verify here.

Neither SMA Hub nor,Trent Douglass, the individual whose email address at SMA Hub was associated with the solicitation, are licensed to sell annuities or life insurance in Oregon.  Verify here.

SMA HUB and other companies offer scam label structured settlement derivative investment products to investors, intentionally misrepresenting them as annuities when they are not annuities. What is notable about today's email from SMA Hub's Trent Douglass. addressed to a CT resident, is that SMA Hub is brazen enough to even remove the secondary market prefix. 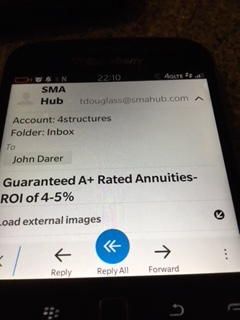 The Lake Oswego Oregon company's email was sent out by Mail Chimp, a marketing automation platform and an email marketing service, begging the question about how many investors were targeted by SMA Hub with the scam labeled investment solicitation.   If you have received a similar email from SMA Hub I'd be interested in hearing from you.

4 years after receiving the communication, SMA Hub is out of business. Caput.