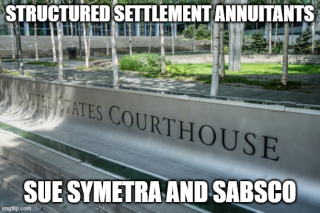 “All persons who are or were, at any time:

The Court denied Plaintiffs’ Motion to Certify a Class as to their breach of fiduciary duty claims.

Plaintiffs brought this class action lawsuit on behalf of themselves and all others who, in settling underlying tort litigation, became the beneficiaries of a Symetra Life Insurance structured settlement annuity, and who then sold the rights to their future annuity payments to SABSCO or another Symetra affiliate.

Plaintiffs’ amended complaint seeks redress for injured persons and families who relied on Symetra to safeguard their loing-term financial well being , alleging that Symetra Defendants solicited Plaintiffs’ rights to their future payments as part of a business scheme that used their position of trust as issuer and owner of Plaintiffs’ structured settlement annuities. Plaintiffs allege that Defendants leveraged their knowledge and unequal bargaining power to profit by purchasing Plaintiffs’ future payments at a steep discount in factoring transactions. As a certified class, Plaintiffs are one step closer to holding Symetra Defendants accountable for these practices.

Symetra was pressured to resign from the National Structured Settlements Trade Association  (NSSTA) as its factoring activity was incompatable with the mission of NSSTA.  To be clear, Symetra actually established a factoring company called Clearscape Funding and solicited not only Symetra (and former SAFECO) annuitants, but externally as well.

I personally sent a strongly worded letter to Symetra on January 23, 2008 withdrawing my appointment in disgust  (see Writing on the Wall below entry for January 23, 2008).  I cannot say the same for other settlement planners who, despite public knowledge of the existence of Clearscape and what Symetra was doing, continued to place business with Symetra.

Will the Symetra Structured Settlement Class Action bring a reckoning to Symetra and shine the light on those who placed their clients in harm's way?

The Writing was on the Wall