Chronovo, which is  based in a suburb of Boston Massachusetts continues to promote annuities using "Bobby Bonilla Day", a “holiday” of sorts celebrated by baseball fans, who use memes and jokes to talk about how the New York Mets pay someone who hasn’t been on the field since 2001 over a million dollars every year until 2035 when there are far better and more relevant choices to illustrate the value of annuities using other baseball players and other sports figures.

The Gratuitous Trivialization of Madoff to Promote Annuities

Why would a rerun of "Creepend at Bernies" be deemed essential to Chronovo to promote the value of annuities, specifically structured settlement annuities?  Bernie Madoff's fraud was the 2nd biggest in US History. Having a value proposition that is NOT gratuitously intertwined with a Bernie Madoff victim would be more approriate. For back story see Madoff Investment Scandal and how it hit former Mets Principal Owner Fred Wilpon

Unfortunately, but not unsurprisingly, this seems to have been lost on Chronovo, which highlighted the Madoff connection in its most recent Chronovo Chronicle celebrating Bobby Bonilla Day. At least the lack of depth perception stopped short of trivializing Joey Gargan, another convicted felon, a former structured settlement broker and company owner and "Kennedy connection", who remains incarcerated at FMC Butner, where Bernie drew his last breath in April 2021.

There's nothing unusual about a team paying athletes deferred annuity payments, but Bobby Bonilla is no Ken Griffey, Jr. or
Manny Ramirez, both of whom have bigger annuities and arguably had greater career accomplishments, by quite some distance. In my opinion Griffey Jr and Manny Ramirez in particular are better examples to promote annuities for any company, let alone, a company from Boston. 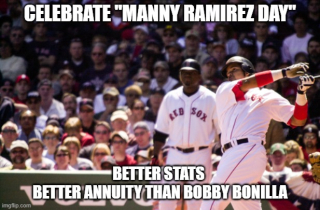 I'm a lifelong New York Yankees fan, but in this case, since we're discussing annuities, I'm waxing lyrical about a Red Sox legend in an effort to change the narrative of certain annuity promoters' (at least structured settlement annuity promoters) narrative from Bobby Bonilla to other athletes who had better careers and more significant annuities.

Manny Ramirez  was a Boston Red Sox and Major League baseball legend and 12 Time All Star.  Manny was a complete hitter, who hit for both power and average, and recognized as one of the best right-handed hitters of his generation, Ramirez finished his career with a lifetime .312 batting average, 555 home runs (15th all-time), and 1,831 RBI (18th all-time). In 111 postseason games, Ramirez posted a .285 batting average with 29 home runs and 78 RBI in being on 2 World Series winning teams.

Griffey Jr.  630 HR,  .284 BA,  1836 RBI,  184 SB, .538 SLG   Griffey, Jr. is a Hall of Famer,  a thirteen-time All-Star and one of the most prolific home run hitetrs in baseball history, 7th in MLB history. Griffey  won ten Gold Gloves as a center fielder and tied for the record of most consecutive games with a home run (eight, with Don Mattingly and Dale Long. He's been on the cover of the box of more than one variety of Wheaties for goodness sakes! 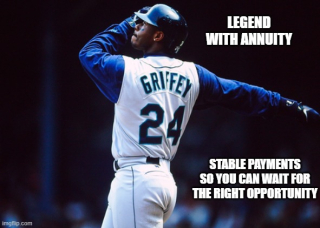 Griffey, Jr. has even been on a Wheaties Box

Ken Griffey, Jr.  $112M contract deferred $3.59MM/year from 2009-2024. Despite being retired and not playing for the Reds since 2008, Hall of Fame slugger Ken Griffey Jr. is the 6th highest-paid players on the Cincinnati Reds.

Bobby Bonilla himself was quoted in the New York Post on July 1, 2022 as saying "“I’m probably more famous for that deal than the career I had”

But for the fact the Mets and its owner were scammed by the late crooked Bernie Madoff, there would be no Bobby Bonilla Day.  Instead of "celebrating" Bonilla, perhaps Chronovo should reconsider their post given Bonilla's deferred compensation peers as a better role model for annuities. Madoff was a crook who destroyed lives and died a miserable death.

One of the more significant and impactful parts of the July 1, 2022 New York Post article was the statement that Bonilla has never approached the Mets about receiving the funds all at once, instead opting to keep the yearly tradition going.  “I’ve never even thought about it,” Bonilla said.   This statement IS something to get in front of young people of color with structured settlements who are targeted by structured settlement factoring companies when they reach 18 and throughout their 20s.