Richart Ruddie Sued for Conspiracy and Deceptive Trade Practices in 2012

Richart Ruddie of JRR Funding and Profile Defenders (NuProfile) was sued in August 2012 by Las Vegas sports betting giant Bill Walters as part of litigation against companies and individuals that Walters said put up phony websites to trick gamblers into thinking they were buying betting tips from him.

The Complaint Against Richart Ruddie

Claims alleged against Richart Ruddie in the lawsuit included:

Richart Ruddie and Michael Cooper, among the Defendants in the case, are listed as managers and members of Cooper's Picks, an online sports betting site, according to annual reports filed with the Florida Secretary of State at all relevant times Download Coopers Picks FLA Secretary of State Annual Report 2012 and still are today.

Walters filed suit in U.S. District Court for Nevada and sought a temporary restraining order to have the sites shut down, which was granted. The matter was settled in 2014, according to Court records.

Walters said in the lawsuit he earned hundreds of millions of dollars from his sports betting and gaming investments and that he does not share his betting picks with the public or others in the sports betting industry.

In line 32 of the of the pleadings Walters alleged that "upon information and belief, Defendant Richart Ruddie has criminal records in the States of Maryland, Virginia and Florida".

Clearly Ruddie has a history of being associated with "brandjacking" even before his involvement with Einstein Structured Settlements, which burst onto the scene in October 2012.

As I have clearly documented, Richart Ruddie has been involved with JRR Funding and Einstein Structured Settlements, a "master class" in the brandjacking of competing settlement purchasers, generation of crap content and false and misleading advertising, including the use of fake names and aliases and fake academic credentials. Other JRR Funding associated properties Edison Funding and Greenspring Funding use fake BBB seals. A number of companies in the structured settlement secondary market have been the financial beneficiaries of this.

Elsewhere on the internet there is evidence of Ruddie's threats of a DDOS attack on a website in 2011.

Also in July 2012, Park Avenue Funding (PAF), a mortgage investment firm, sued Profile Defenders and its principals, David Lynn and Richart Ruddie, in Superior Court of Ocean County, New Jersey Docket L01771. In the lawsuit, PAF asserted that it hired Profile Defenders to help it manage its internet reputation. According to the suit, Profile Defenders, rather than assisting PAF, used confidential information that PAF provided to it to blackmail PAF in an attempt to extort money from them with threats to further damage their online reputation. PAF filed the lawsuit to illustrate the dangers of providing confidential information to unknown "web companies" who claim to do "reputation cleanup" or otherwise monitor your "internet presence." Bruno de Vinck, Officer of PAF, said, "These firms can very well turn out to be the client's worst enemies that they actually brought upon themselves." 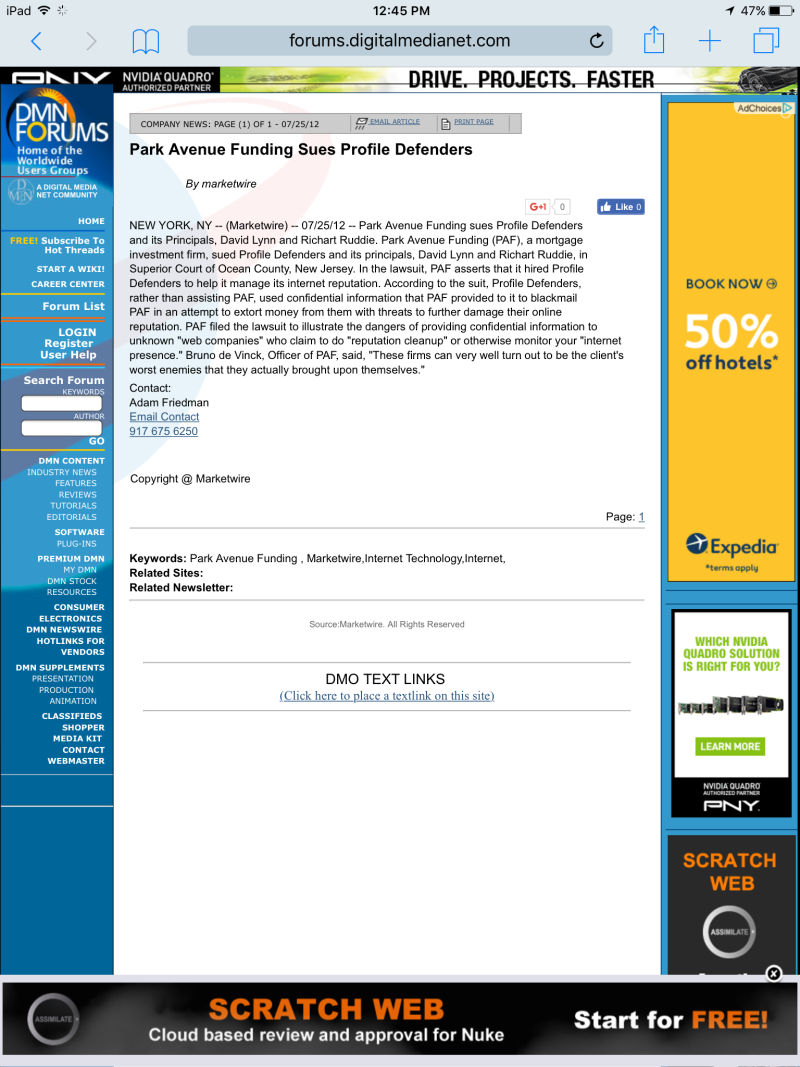 In 2021, this post was the subject of a fake DMCA complaint, along with another post concerning reputation manager Richart Ruddie's "TextBook Frauds cited in Utah Law Journal" from 2020 that both (1) plagiarized our work and (2) the plagiarized content appeared on Richart Ruddie's own blog on the same blogging platform with a backdated published date to support the fake DMCA. Our post was subsequently restored following our discovery of the attempted scam of the blogging platform and our DMCA counter claim as the original author and publisher.