Einstein Structured Settlements' ability to do something really dumb is proven, again. Surely the brainchild of Ryan Blank and Richart Ruddie has their Owings Mills high school teachers cringing,

Einstein solicits people who have " suffered an accident with a structured settlement".

Say you collide with a structured settlement at 60 miles an hour. Like that's a bad thing?  So you dust off the "paper cut" sustained as you were propelled through "the windshield" into a lifetime of stable, income tax free bliss. Priceless! It's not like you're hitting a jackknifed water buffalo.

Every picture tells a story... 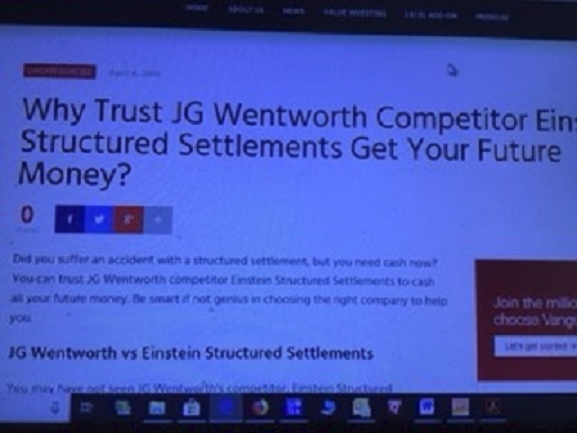 Nonsense 1:  It has become commonplace for lawsuits that are settled out of court to provide the award through a structured settlement via an annuity

FACT: A settlement is not an award, it's a settlement. A settlement is the result of a compromise and agreement among parties to a dispute. An award is an amount of damages given after a trial by jury, or a bench trial.

Nonsense 2: You can sell your annuity on the secondary market through an annuity broker. By using a qualified agent and following the process defined by your state, you can legally change your settlement

2. Representatives of settlement purchasers are typically not annuity brokers or qualified agents.  Don't be deceived. You can easily verify if someone holds an insurance in your state by Googling "(Name of Your State) verify insurance license, or insurance agent look up".  If any representative is holding themselves out as a broker or agent or agent without a verifiable license report them to me, with appropriate documentation (copies of emails, website, solicitation postcard) and I will get the information to your state regulator. Or you can do so yourself.  You would like to think you can trust these companies, but you can't when you have the likes of Annuity Sold LLC, a Maryland company associated with Ryan Blank and Richart Ruddie of Owings Mills MD and Fort Lauderdale, Florida, which at one time fraudulently advertised that the company was licensed in all 50 states. Fortunately Annuity Sold was banned from doing business in Maryland for 7 years along with a slew of other Ryan Blank and Richart Ruddie related companies.

Nonsense 3: All but three states require a court to approve the sale and have a strict process. This process protects you, the seller, from unethical structured settlement purchasers.

Because state legislatures have left a gaping wound in the regulations that have addressed the process but have not regulated those soliciting and providing advice to sellers, state legislators have exposed their citizens to be pecked away by structured settlement secondary cash now vultures and financial rapists. 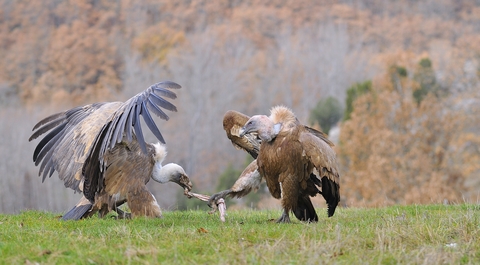 There is an easy fix. Regulate the "Mo-fos".

The tubes have been pulled out and hospice has been called in,  JG Wentworth, the leader of a massively underegulated industry whose members profit off the unsophisticated and the ignorant,  has filed for Chapter 11 bankruptcy protection for the second time in 9 years according to Philadelphia Business Journal. Yet the word smithing on its press release framed by the wallpaper of some stodgy New York City law firms uses words kindler and gentler for PR.

It's only too bad that a figurative dose of morphine is not available for JG Wentworth investors who were ripped off by the analysts who made questionable recommendations of the stock right before it plummeted in the first of a series of capital extinguishing moves that led to JGW's delisting and became JGWE. Read my recent commentary about JG Wentworth's stock performance chart, that looks as if the company "flipped investors the bird" in 2014, just before the beginning of the company stock's tumultuous drop. JG Wentworth went public 5 years after JGW shafted  investors in a 2009 bankruptcy.

JG Wentworth is a defendant in a class action law suit filed September 14, 2017 in the Eastern District of Pennsylvania as one of the alleged participants in what was described in the complaint as an "Annuity Fraud Scheme" in which even the judges were alleged complicit.

JG Wentworth is also a defendant in a lawsuit arising out of the acquisition of Westar Mortgage. Allegations can be characterized as questioning shady dealings by JG Wentworth in an equity funded deal that was worth less almost immediately after the deal concluded when JG Wentworth stock began to tank. It has never recovered.

It should be noted that the stock rallied a penny, AFTER after this post was published to close at 3 cents!

As the chart clearly shows, JG Wentworth stock has simply been a "big FU" to investors from the very beginning in 2014. I mean really, check out the index finger and bent knuckles in 2014. Contrast JG Wentworth's market cap with the Q3 2017 average sales price for new homes in Manhattan which was $4,256,992 and median sales price was $2,797,500, according to Curbed New York. 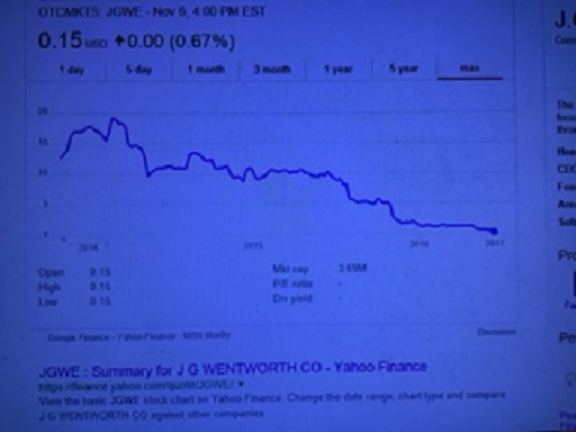 The Curious Case of JG Wentworth | Charting "The 800lb Gorilla"

It is duly noted on this 22nd day of August 2017 that JG Wentwtorth (JGWE) stock chart reveals the preening proverbial 800 lb gorilla.  Such a "ham sasquatch"!

Belly aching up JGWE 800 lb Gorilla "Gasping for Air" at 17 cents/share, touching an all time low of 15c earlier in the day

JG Wentworth is the market leader in the structured settlement secondary market but according to S&P Global ratings, JG Wentworth "is saddled with an untenable debt burden".

At the same time, S&P lowered its issue-level rating on the company's senior secured debt to 'CCC-' from 'CCC+'. The recovery rating remains at '4', indicating that creditors could expect 30%-40% recovery in the event of payment default. "Our rating action today reflects our opinion that a distressed debt exchange transaction, which the company publicly disclosed it was contemplating earlier this year, is likely in the next six months" said S&P Global Ratings credit analyst Chris Cary. JGW's proposals indicate two scenarios: the first is the company aiming to reduce its debt to $90 million from $449 million, and thesecond is the company proposing to reduce its debt to $65 million. Both scenarios would greatly enhance the company's financial position and likely,in our view, position the company to face upcoming headwinds from both rising interest rates in its structured settlements business and expected lower refinancing volume in its mortgage business

The highlighted statement is also a clue into what motivates JG Wentworth competitor Novation Funding to use "Fire Sale" marketing featuring daily blasts about rising interest rates. As Standard & Poors suggests, rising interest rates are not good for structured settlement factoring companies and Novation Funding is out there hustling annuitants to sacrifice long term security for pennies on the dollar. 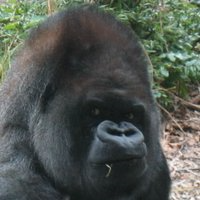 When it comes to 800 lb gorillas, JG Wentworth is a "Gorilla in the Missed".  I'll skip the whole "Magilla", but at 20 cents, just off a day low of 18 cents and providing little value for investors, one wonders when the fat lady will begin her aria?

JG Wentworth "Present Value" | At the End of The Quarter, JG Wentworth Shares at A Quarter

The 800 lb gorilla has had a "gastric bypass".  JG Wentworth stock (JGWE) has dropped almost 42.86% in 3 months | Down 59.8% in 1 year. The market cap is a little more than $6 million. The stock has been nothing short of an unmitigated disaster. 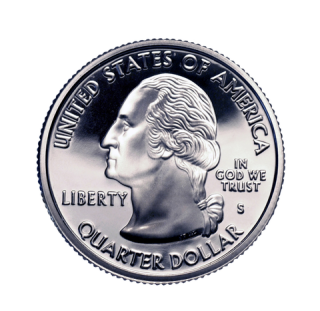 EBITDA  (An approximate measure of a company's operating cash flow based on data from the company's income statement).

What Does JGWE Stand For?

The lawsuit pits J.G. Wentworth S.S.C. Limited Partnership against Joan L. Singleton of Lakewood, Ohio, in the Philadelphia County Court of Common Pleas for failure to turn over a lump sum. In a November 1996 deal, consummated before the enactment of the Victims of Terrorism Tax Relief Act of 2001, that begat IRC 5891, Singleton entered into a purchase agreement with Wentworth, to purchase from Joan Singleton, the right to receive certain future periodic annuity payments, in exchange for a lump sum cash payment.

Singleton became entitled to the payments after being named the payee of a structured settlement annuity contracts issued by Omaha Life Insurance Company. Singleton agreed to not otherwise interfere with Wentworth’s right to receive and collect the payments, or make any changes in instructions regarding their distribution.

“Singleton is in default under the purchase agreement by virtue of the fact that she has failed to ensure Wentworth received the payments it purchased, and has wrongfully retained the $130,000.00 portion of the $180,000.00 lump sum payment due on Dec. 1, 2016”

The plaintiff seeks damages of the $130,000, plus interest and costs of suit. Should be a win for JG Wentworth.

The lawsuit is informative both about the history of structured settlement factoring and risks associated with investing in structured settlement derivatives. In those days the buyer had to rely upon the integrity of the seller to turn over payments or change the address for the mailing of payments. Since the VTTRA 2001 was signed into law by George W. Bush in January 2002, a judge must determine if the deal is in the best interest of the seller and any applicable dependents and a "qualified order" must be issued which assuming the integrity of the participants should provide comfort to all sides.   Unfortunately the structured settlement secondary market has "barfed up"  enough bile over the intervening years to fill cesspools from coast to coast.

During its quarterly earnings call the next day , JGW officers and employees revealed knowledge of material non-public information they knew but failed to disclose to Jones prior to the sale of JGW stock to Jones and the closing of the Transaction . Following the quarterly earnings announcement , the value of JGW’s stock declined sharply, eventually rendering all but worthless 25% of the agreed-to consideration paid by JGW to Jones and the other purchasers of JGW stock for their WestStar stock.
JGW stock then continued to plummet to the point where it was delisted from the NYSE in June 2016.  The mortgage business acquired from WestStar is the most profitable business that JGWE currently has.
JG Wentworth is a member of the National Association of Settlement Purchasers (NASP) and the largest buyer of structured settlement payment rights.
Read the JG Wentworth Fraud lawsuit Complaint in Walter F. Jones b The JG Wentworth Company and Stewart Stockdale   SDNY 1:16 cv 10018JSR
Download JGW Fraud Lawsuit filed by Walter Jones 12 2016
The matter was voluntarily dismissed in February 2017.