Is Crypto Appropriate for Injury Victims?

Is Bitcoin or other Crypto Suitable for an Injury Victim's Settlement Plan?

I recently encountered a Internet troll who "must be" a spokesperson for "Bitcoin or Stupid Shit?", because anyone who reads our 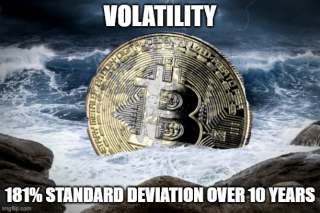 blogs, knows what we do, what people in the settlement planning industry do, including that judges that must approve minors' settlements, understands that an investment that has a 121% annualized rate of return over 10 years with a 181% standard deviation* might not be the most suitable investment for injury victims. And apparently it's not suitable enough for a large allocation for everyday investors either, according to Ray Dalio. And there are laws that restrict investments for minors and incompetents.

In statistics, the standard deviation is a measure that is used to quantify the amount of variation of a set of data values. Used above as a measure of volatilit

"If you offered me all the bitcoin in the world for $25.00, I wouldn't take it", if doesn't convince you bitcoin is a scam I don't know what would.- Warren Buffett , Berkshire Hathaway annual meeting  April 2022, covered by CNBC

“In my life, I try and avoid things that are stupid and evil and make me look bad in comparison to somebody else – and bitcoin does all three,” Munger said. “In the first place, it’s stupid because it’s still likely to go to zero. It’s evil because it undermines the Federal Reserve System ... and third, it makes us look foolish compared to the Communist leader in China. He was smart enough to ban bitcoin in China.”  Charlie Munger,  Ibid.

1. According to billionaire investor and hedge fund manager Ray Dalio, it’s reasonable for everyday investors to hold a small amount of bitcoin, the largest cryptocurrency by market value. On a recent episode of the We Study Billionaires podcast, Dalio was asked by co-host William Green whether allocating 1% to 2% of one’s portfolio to bitcoin was reasonable. “I think that’s right,” Dalio replied. Dalio has served as co-chief investment officer of the world's largest hedge fund, Bridgewater Associates, since 1985. Dalio is regarded as one of the greatest innovators in the finance world, having popularized many commonly used practices, such as risk parity, currency overlay, portable alpha and inflation indexed bond management.

3. On June 29, 2022 an article by Alex Hern and Dan Milmo appeared in The Guardian with the headline "Crypto crisis: how digital currencies went from boom to collapse "Savers talk of devastating losses as assets such as bitcoin and ‘stablecoins’ like terra fell sharply"

"Cryptocurrencies hit a rough patch in 2022, with prices falling and some companies facing serious financial issues".
5. On August 31, 2022, Fortune published  The Bitcoin crash has wiped out over $1.3 billion in value from Michael Saylor’s Bitcoin holdings. Now he’s being sued for tax fraud  Fortune reports that the 57-year-old entrepreneur made his name during the dot-com bubble of the late 90s and is well known for having lost $6 billion in a single day during the crash that followed.

6. If that's not enough, on April 26, 2022, the New Jersey law firm of Console & Associates discusses data breaches related to crypto

"Over recent years, Bitcoin, Ethereum, Litecoin and other cryptocurrencies have surged in popularity and value as more and more people see the value that the asset class presents. However, hackers see the fact that everyday investors are now holding cryptocurrency as a major opportunity. In fact, over the past year, there have been several high-profile cryptocurrency hacks resulting in the loss of more than $14 billion dollars".

7. Comedian Bill Murray loses $186,000 to hackers Bill Murray recently held an NFT auction in which most of the recouped funds were in the said wallet. The statement showed that the hacker drained 90% of the entire funds in the wallet, leaving just a little over $500 in the wake of the act.  Cryptopolitan September 3, 2022

8. May 12, 2022 New York Post reports "Bitcoin’s plunge slashes the fortunes of major crypto billionaires", the Winklevoss twins lost 40% of their respective fortunes,  more than $2 Billion each at the time the story was poublished in the NY Post.. Sam Bankman-Fried, the founder and CEO of crypto exchange FTX, has lost roughly half of his on-paper fortune since March and is now worth about $11.3 billion". Crypto billionaires losing fortunes as bitcoin tumbles (nypost.com)

9. "We've only scratched the surface of how bad the crypto crime wave has gotten June 13, 2022 LA Times by Matt Pearce

"These are tough days for cryptocurrency investors. Values are cratering. Prominent crypto firms are faltering. And it's coming after a massive surge of criminal fraud that has been pummeling crypto users with unknown billions of dollars in losses with little relief in sight"

10. Bitcoin is down roughly 60% this year and some other tokens have lost even more. The ninth month of the year has historically been one of the worst for the largest cryptocurrency, falling every September since 2017. Bitcoin has averaged an 8.5% drop for the month over the past five years, according to Bespoke Investment Group".  August 31, 2022 Bloomberg

11. Says Fort Lauderdale's and Owings Mills Maryland's Richart Ruddie (also self-styled as "Richart Ruddie Annuity"), a bête noire of sorts in structured settlement circles due to his association with JRR Funding, AnnuitySold and related companies, which were banned from doing business in Maryland for 7 years from January 2018 for fraud:

"Losses of Bitcoin Value – As the shining light of the cryptocurrency industry, Bitcoin advanced in value to a high watermark of $69,000, but the erosion of that value has declined since November of 2021. The currency currently trades roughly around the $20,000 mark a high mark in 2018 that now feels like a low mark for the worlds most well known coin. That’s almost an 80% loss in just over 6 months".- The Crypto Updates July 12, 2022

On a $1,000,000 investment that's a $800,000 loss.  Could you handle it emotionally?  What if you were not physically able to work? What if that money represented compensation for the loss of your spouse, parent or child?

Bitcoin Loses Steam Bitcoin is currently trading at $19,100, down 14% in the past week and down by around 4% over the past 24 hours. The world’s largest cryptocurrency is now down by a staggering 75% from its all-time high in November 2021 when its market capitalization was $1.27 trillion. It is now down to $366 billion.

I dont think it's really necessary to go on. Is this the kind of volatility that a vulnerable class of investors should be exposed to?

Next time someone tries to "poo-poo" the renewable credentials of Bitcoin mining, remember AmityAge Mining Farm. Founded by Gabriel Kozak and Dušan Matuska, the Bitcoin mining facility uses human and animal waste to generate electricity for mining".  According to Matuska, using renewable energies such as biogas “shows that we can really accelerate the adoption of these renewables and make their return on investment higher in the end,” while it’s also a cheap energy source. An ecologically sound and low-cost way of generating electricity, biogas electricity plants convert waste into methane gas due to a fermentation process. The gas is then burned as fuel".  Read the full story here

Sidney Vee, the Bitcoin troll missed this, but scoured the Wayback Machine to focus on a long since deleted post titled "Bitcoin-Shitcoin", selectively overlooking the criticism of Henrique Vicente... whose "Cryptocurrency Tulipmania: Bitcoin is a shitcoin" was published May 10, 2021.  In 2020, John McAfee opined that "Bitcoin is the true Shitcoin".  Oh dear!

While I understand that a "Bitcoin v Stupid Shit" "spokesperson" might get their knickers in a twist, the above suggests there is plenty of support for use of the term in the long deleted post. The fact that the troll decided to spend his spare time going into the Wayback Machine is something else altogether. Let it go Chuck. The numbers and volatility speak for themselves. Did the troll stay in bitcoin or did they take a 75% loss?

My message is clear in prior posts.  The volatility of Bitcoin and other crypto are generally not suitable for injury victims and probably would not be approved for injury victims where court approval of settlement is required. For example see New York  CPLR § 1206. Disposition of proceeds of claim of infant, judicially declared incompetent or conservatee, which states:

"Cryptocurrency firms including Coinbase Global Inc., Galaxy Digital Holdings Ltd. and MicroStrategy Inc. all plunged more than 25% last month. The declines added to the pain of a dismal year amid a deep and extended plunge in Bitcoin and other digital tokens. While that trio of firms rallied this week, they’ve still wiped out roughly $52 billion of shareholder value in 2022". 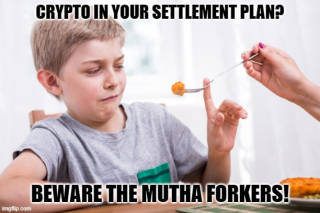 and bringing the food to your mouth.

Despite structured settlement protection acts such companies have partnered with big data and/or maintain their own databases to target their victims using false, misleading and unethical marketing techniques to get them to fork over the valuable rights to their structured settlement money.  Beware the "muthaforkers"

Beware of mailings or phone calls from companies who pretend to be from a fake but official sounding government agency or fraudulent structured settlement registry.

It may seem like common sense, but beware of attempts by representatives of structured settlement factoring companies trying to befriend you, buy you booze, get you to blaze one (in states where it is illegal), take you to strip clubs, fly you to Florida or bus you into Virginia or Connecticut.  Understand that you are the sheep and these companies are wolves seek to shear off your financial hair.

It's all unsavory business conduct that is designed to trap you so they can fleece you for pennies on the dollar. Don't get forked over. 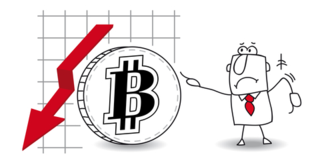 Hackers stole $437M worth of Bitcoins
The recent New York Post headline Hackers stole $437M worth of bitcoins in 'tinker toy' currency mess portrays something in some ways worse than a Ponzi scheme in sheer speed of its collapse. The story, is that Mt. Gox — formerly known as Magic: The Gathering Online Exchange — made 750,000 bitcoins worth $473 million disappear, the company said Friday. The former trading-card exchange declared bankruptcy.

As the New York Post's Jonathon M. Trugman points out  March 2, 2014, a bonafide currency has a homeland, and it is that country's specific approved form of money, with a seal and a traceable serial number, backed up by the gross domestic product, taxes and oversight.

Trugman opines that "anyone referring to bitcoin as a currency is slimy or just plain stupid".

Bitcoin Not a Starter Settlement Planning Solution for Injury Victims

If you are receiving a settlement or already have the proceeds of your settlement beware of speculative and risky investments. A gimmick is a gimmick.  Instead start with a structured settlement, establish a core stream of income that is unaffected by the stock market, or the real estate market, before you start taking risks in the market, or starting a business, investing in someone else's business,  or taking on a lot of debt.