An industry colleague and I were ruminating about the reasons we are each having good business years in a terrible economy , with low interest rates and where reportedly, some in our industry are struggling to do even $1,000,000 in production.

We agreed that it is what we are selling: Safety, Security and Guarantees.

We also agreed that 5 years ago, the level of confidence in the stock market was such that a heavy down day would be discounted as simply a bad day. The current environment has sapped that confidence. If you can lose 6% in a couple of days and 15=20% or more in a couple of weeks, it could take years (that you may not have) to recover. A CNBC TV analyst announced today that we are in a Depression.

﻿I joined the financial services industry at just about the pinnacle of interest rates in 1983. For almost 20 years I have heard "your business must suck because interest rate are lower (than they were) ". Despite the curmudgeons, somehow through creative vision, hard work and a great product solution,  I have been able to "eke out" a living that apparently, exceeds the median income in the United States.

"Figuratively" a structured settlement is neither "36-24-36" with a "tramp stamp" and "FMPs", nor an Adonis with washboard abs, Popeye arms, Aviators and a Porsche.

If you want a "Bucking Bronco", invest a few bucks in a mechanical bull. Don't waste your settlement.

On Time Every Time® is a registered trademark of 4structures.com, LLC

Non qualified assignments offer significant benefits to both defendants and plaintiffs resolving lawsuits with taxable damages-those that do not meet the income tax exclusion for personal physical injury, physical sickness or workers compensation [IRC 104(a)(1) or IRC104(a)(2)]. Registered Settlement Planner and structured settlement expert John Darer gives an overview of non qualified assignments which can be used in environmental, divorce, employment, property cases, commercial disputes and structured attorney fees as well as other non litigation applications like deferral of celebrity endorsement fees, lotteries and contests and structured installment sales (an alternative to the 1031 Exchange or as a 1031 fall back) 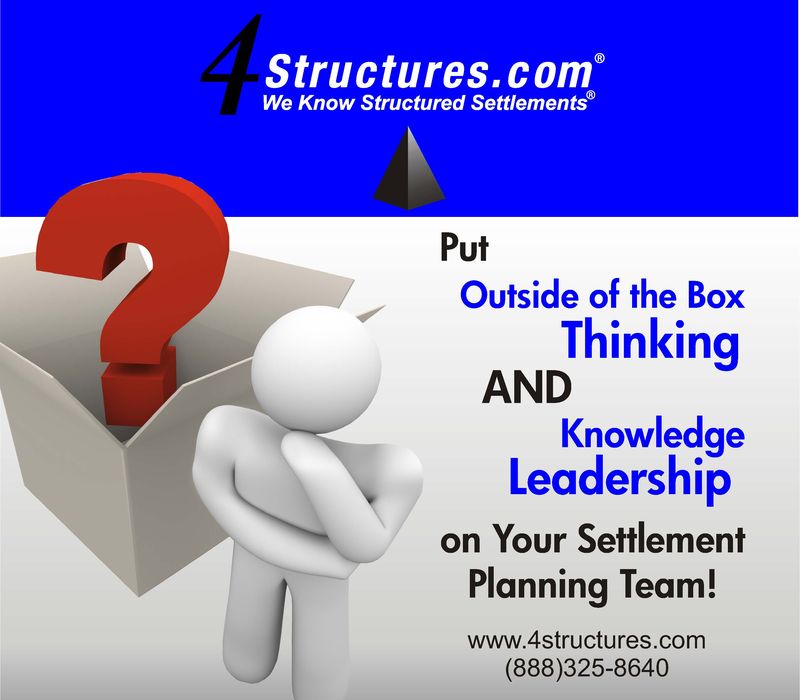 This is the third and FINAL installment of the Structured Settlement Watchdog''s critique of a published paper attributed to Laura J. Koenig, then a JD candidate from Indiana School of Law, now of the United States District Court Southern District of Indiana. The Summer 2007 paper entitled "Lies, Damned Lies, and Statistics? Structured Settlements, Factoring, and the Federal Government  (82 Ind. L.J. 809) attacks the government's rationale in offering a tax subsidy to structured settlements, and structured settlement factoring transactions. In Parts One and Two of the series "Indiana University Gives Law Degrees For This Crap?" For someone who a year earlier was cited by the Indiana Law School Dean as  a GOOD researcher, the Structured Settlement Watchdog found that Ms. Koenig's research was incredibly wanting, often errant in fact, undermined by her excessive reliance on too few sources of information, much of which was outdated.

In her paper Koenig goes "back to Square One" in attacking structured settlements used to resolve claims under the Federal Tort Claims Act (FTCA). Why she would consider the use of last century's GAO statistics (1997-1999) to calculate an average that the federal government spent on structured settlements, and THEN use that outdated statistic (to determine the percentage of FTCA claims that are resolved, in 2007, via structured settlements),  is anyone's guess.

Koenig questions why the federal government uses structured settlements at all. She suggest the most popular reasons to justify the legislative justification for promoting the growth of structured settlements are providing long-term financial security to tort victim's and protecting "the public fisc." (i.e. tax payers' dollars). Koenig continually mocks the "squandering plaintiff" idea for what she and Adam Scales call the anecdotal stories. She admits that the image of "heedless dissipation" may be correct, but states that no reliable information justifies this. Instead of overly relying on "on hit wonder' Adam Scales, one wonders (as an example) why Ms. Koenig missed, with all her Dean of Indiana law School endorsed "research skills", a consumer behavior study cited by Kate Goggin in her article Developing Financial Sense.

While the above cited "credit card attitude" study does not deal specifically with injured plaintiffs, many structured settlement recipients are college students whose plans were set up for them while they were minors, just like Orlen Olsen***. The 2004 Texas Tech College Student Survey (at p3) showed that 80.6% of those surveyed cited parents, family & friends as the primary source of financial information. More than 60% of respondents parents or guardians used credit while respondents were living at home. Further 43.4% of the respondents had parents or guardians that occasionally, sometimes, often or very often experienced credit related problems. And college students are just one segment of the current and former tort victim universe. What of those current or past tort victims who come from a less educated segment of the population?

Back to Koenig. In her paper at p 7, Section C Koenig  incorrectly states "with the enactment of IRC 130 claimant's annuity earnings are entirely tax free". IRC 130 deals solely with the tax treatment of the qualified assignee. The tax exclusion to the plaintiff is under IRC 104 and that exclusion only applies to income taxes on damages. Ms. Koenig and her apparently careless "advocati diaboli" failed to comprehend and Koenig failed to express that the tax exclusion applies to certain types of damages NOT annuity earnings. Prior to the enactment of IRC 130 the tort victim could receive the same income tax consequences. See Revenue Ruling 79-220.

Laura J. Koenig's rant on IRC 130 fails in relation to FTCA claims as she clearly doesn't understand how structured settlements work under the FTCA .  Incredibly she lists Terry Cushing, Assistant US Atty in Louisville, KY as one of her advocati diaboli. One wonders why Koenig did not consult someone closer to the management of the FTCA program like Roger D. Einerson. Assistant Director of the United States Department of Justice Torts Branch? Has she done so Koenig would have discovered that IRC 130 does not come into play with FTCA structured settlements, which are generally owned by the United States. Had Ms. Koenig paid closer attention to even her own sources, like Richard B. Risk, Jr., she would have discovered this.

At the end of her shoddy research, presented with the excruciating tedium of a bad sermon on a sunny day, Laura J. Koenig "Disraeli" somehow concludes that "simply put Congress can no longer rely on "lies,damn lies and statistics" to quietly place tort victims at the mercy of the structured settlement and factoring industries.

In my conclusion it's only fitting to quote another British prime minister, from the more recent 20th Century:

** since Koenig failed to find it, readers may find it compare the 60 "refereed" papers on financial planning and consumer related issues written by Dr. John E. Grable to the single overly cited work (by Koenig) of Adam Scales. For Dr. Grable's CV click here. Unlike Scales' publications, you won't see any references  to "How Much Is That Doggie In The Window?"

*** Orlen Olsen is the ersatz tort victim who blew through his money through a series of fatal financial decisions and one "anecdotal reference",who Koenig uses as "a tool" to support her case against the  structured settlement tax subsidy.