What is the Role of Independent Professional Advice in an Structured Settlement "Cash Out"?

Should the role of independent professional adviser begin with an apparent presumption that the act of selling structured settlement payment rights is in the best interest of the would be seller?

Here is how one of my industry colleagues markets his services as an independent professional adviser.

"In short, there are few firms more suited to help you unwind a structure that no longer fits your needs and determining what your best options are to sell your payment program. ____________________will ONLY work on a fee basis and never takes finder fee's  (sic), referral fee's (sic)or commission's (sic) from the purchasor's (sic) of annuity cash flows. Our objective is to quickly and professionally assist you with this transaction and to insure you obtain the best possible price and that you get through the court approval process as quickly as possible".

My approach to independent professional advice in this context is different. I approach an IPA assignment to first determine whether or not the transaction is in the payee's best interest. In a lot of cases it isn't  I determine the reason for wanting to sell and the backstory. I determine if the payee has explored other options, how they have done so and the results of those efforts. If in fact a structured settlement factoring transaction is in their best interest, in my opinion, I will make sure that they have shopped around and that they have a clear understanding of the transaction and it's impact on them and their family as well as the finality. I ask the factoring company to provide documentation so I can see what disclosures have been made. I make it clear on our website that an IPA is not a rubber stamp, nor should it be.

One person called me to sell structured settlement payment rights to pay the balance of the cost of her mother's funeral which had occurred a  few weeks prior. The cost of doing a factoring deal was 5 times more than the amount she "needed now" from a lump sum due in only 3 months!  A vulture factoring company was drooling to do the deal. Instead of sanctioning this bad deal, I suggested contacting the funeral home and working out a financial arrangement with a nominal amount of interest if necessary.

Years ago, before Peachtree's merger with JG Wentworth,  I was asked to do an IPA on a Peachtree case in which the discount rate was in the high teens. The annuitant had not shopped around and it was clear he could have done much much better and at the very least negotiate with Peachtree for a better deal. He said he was too far down the pike and had a court date and did not want to start over. I memorialized my findings including his comments in the IPA.

There is nobody more outspoken on the structured settlement factoring industry business practices than me over the last 12 years. I think it is a good idea for qualified individuals in the primary market to provide such advice if they really believe in structured settlements, as I do. It's a lot better than sitting back and reading about the "drek" IPAs produced by the likes of Charles E. Smith Esq. to the Access Funding victims.

On a technical note, my industry colleague claims to be "more suited to help you unwind a structure".  His statement about "unwinding a structure" is highly inaccurate and I doubt his ability to prove that he has actually done this.  You see, when someone receives cash now in exchange for some or all of their structured settlement payment rights, the structure actually stays in place, only the rights to the payments are transferred to someone else. What's wrong with describing what actually happens? At the very least, use a better metaphor.

I've obtained a copy of the complaint in the legal malpractice case of  Maryalice Rose v Charles E. Smith and CES Law Group, LLC  In the Circuit Court for Baltimore City.  In my opinion, the case is significant because it questions the standard for statutory independent professional advice given to would be sellers of structured settlement payments rights.  The plaintiffs allege that it was never the Defendant Smith's intention to provide independent professional advice, rather it was Defendant Smith's intention to make  money for himself and his law firm and that he breached his fiduciary duty and legal duties owed to the plaintiff.

Maryland is one of the minority of states that mandates independent professional advice, also known simply by an acronym familiar to beer connoisseurs , "IPA"

The now 21 year old plaintiff is functionally illiterate and suffers from cognitive deficits and learning disabilities,  [ Complaint at 18-19] and does not have the cognitive ability to work. [ Complaint p 12 #70 legal malpractice count]

According to the timeline alleged in the Complaint...

Plaintiff alleges that Charles E. Smith Esquire accepted the legal and fiduciary responsibility toward Maryalice Rose to render independent professional advice to her. At the time he accepted the responsibility, he entered into an attorney-client relationship with Mary Alice Rose.  [ Complaint at 36]

Attorney Charles E. Smith signed the letter (reproduced below) from the Complaint (obtained from the Baltimore City Court) dated October 29, 2013, in which he stated that he spoke to Maryalice Rose on November 4, 2013 (6 days after the date of his letter), and that he reviewed on her behalf the proposed transaction between Ms. Rose and Access Funding, LLC. Plaintiffs alleged this to not be true. [ Complaint at 37] 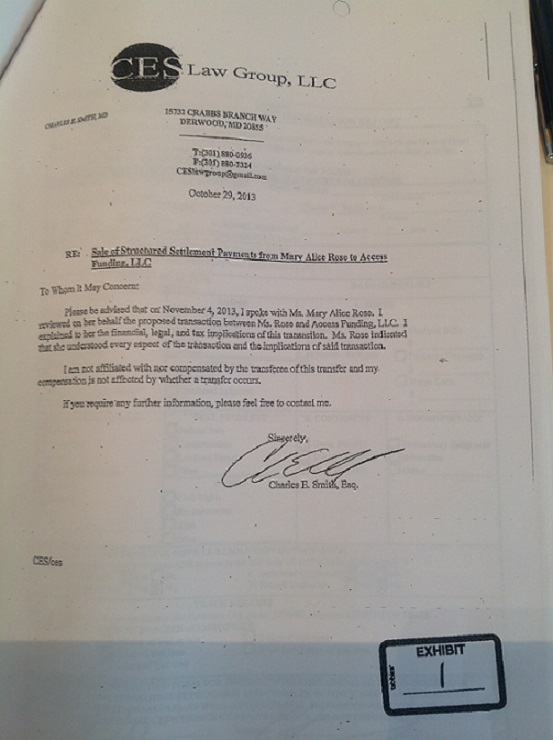 Back to beer for a moment...

How Was IPA Invented?

IPA was allegedly invented by the British during their efforts to colonize India. Again and again, the beer they sent their troops failed to endure the sea voyage all the way around the Cape of Good Hope. Extreme temperatures and prolonged storage without the benefits of refrigeration were less than ideal conditions for transporting beer. As a result, it kept spoiling on the trip. The British had two tools to work with: alcohol and hops. Both of these work as preservatives. According to legend, it was George Hodgson of East London’s Bow Brewery who eventually created the first IPA. It was bitter and highly alcoholic, but it could make the long ocean trip.

Structured settlements are intended to make the "long ocean trip".  Prior to 2002 at least, cash now pushers behaved like figurative pirates who saw opportunity and whose profit making objectives impaired the journey of the structured settlement annuitant around the "Cape of Good Hope", the hope that their previously negotiated long term financial security was assured. Unfortunately for some, the Sirens (working a little Greek mythology in there) of "Cash Now" masked the bitter high discount rates that "plundered" more of the structured settlement annuitant's future payments than were necessary.

The provisions of the Victims of Terrorism Tax Relief Act of 2001 which gave rise to IRC 5891 and over time, the state structured settlement protection acts, were enacted to protect structured settlement annuitants. The concept of independent professional advice is to make sure people in a "cash now stupor" know what they are doing and understand the potential consequences. And, critical, in my opinion, it is the responsibility of the professional providing the IPA to actually advise against the transaction if it doesn't make sense.  An IPA is not supposed to be a "hall pass".

Having to sell your structured settlement really sucks, but if you must do so,  you should be able to depend on laws that have been put in place to protect you and a review process such as an IPA.

There are people who provide independent professional advice, that truly take the time to do the job, but like just about everything else in the structured settlement secondary market, self-regulation doesn't work.

According to the Complaint, Charles Smith, for himself and CES Law Group, LLC has signed at least forty identical or substantially similar letters under similar circumstances in other petitions where Access Funding was seeking a transfer of a structured settlement. [ Complaint at #57)

Maryland's structured settlement protection act failed Maryalice Rose, exactly the sort of person that the act was designed to protect. Had a mandatory court appearance been required a judge could have interviewed Ms. Rose and possibly determined for himself of Ms. Rose's a capacity or incapacity to make a decision that was in her best interest.  This same scenario has played out in other states, like Florida.  Unless and until mandatory court appearances are required nationwide, we're bound to see more victims.