All fixed and variable annuities are governed by a comprehensive state regulatory framework. State laws govern the organization and licensing of insurance 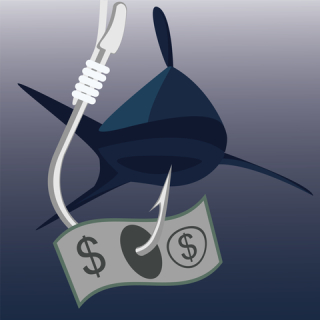 A secondary market annuity is not an annuity

companies, and state insurance departments oversee insurance company operations. Generally, annuity contracts and amendments must be filed with, and approved by, each state in which contracts are sold. Insurance agents (often referred to as “producers”) need to be licensed in each state in which they operate. Only licensed insurance agents may sell annuity contracts.  Source: Insured Retirement Institute. The Insured Retirement Institute (IRI) is the leading financial services trade association for the retirement income industry. Members represent the entire supply chain of insured retirement strategies, including Insurers, Banks, Asset Managers, Broker-Dealers, Distributors, Financial Advisors and Solution Providers.

Insurance agents must be licensed by state insurance departments. Applicants must submit a form to the state providing information about their experience, character, and financial responsibility. They also have to pass a written examination. (Agents selling variable annuities are also regulated by the SEC and FINRA.) Insurance agents also must be appointed by each insurance company for which he or she serves as agent.  Source: Ibid

3. Contract Requirements and Prior Regulatory Approval

Annuity contracts and related forms generally must be filed and approved in every state where they will be sold. An alternative, more streamlined method of obtaining state approval is to file through the Interstate Insurance Product Commission (IIPRC), of which 41 states are currently members. While there is no standard required form for annuity contracts, states and the IIPRC mandate that certain provisions be included in all contracts, such as a free-look provision that allows a contract owner to examine the contract for a period of time and return it for a refund if dissatisfied for any reason. Generally, contracts need to be readable and cover all of the contract’s basic features before the state will approve the contract for sale. Amendments to contracts also must be filed and approved. If the amendment could adversely affect existing contract owners’ rights, prior approval from the contract owners may be required.  Source: Ibid.

All states have adopted unfair trade practices acts with provisions that apply to an insurer’s activities. These laws define and prohibit unfair methods of competition and unfair or deceptive business practices, including those involved with the issuance, sale, and administration of annuity contracts.

Read about the AnnuitySold scam that led to a 7 year ban in Maryland for Annuity Sold and related entities.

There is no reason to use the term " annuity" to describe factored structured settlement payments when marketing them to consumers/investors, except for an intent to deceive. That being said the "charlatans" who use the term "annuity" can't have it both ways. If they call it an annuity and the intent is/was for their customers to believe it is an annuity then the remedy should be that they are subject to the same or similar punishment as if it were an annuity.

The picture below is a screen shot of part of a web page used by the firm in question, to solicit investors in factored structured settlement payments streams. 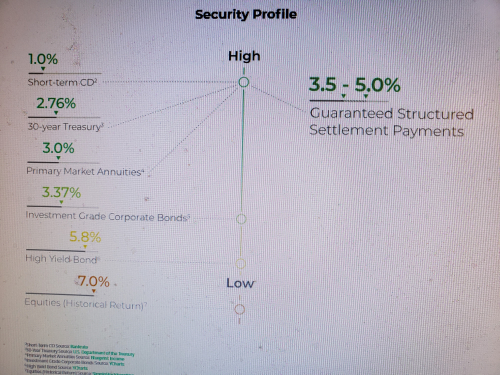 Comparison by Discombobulation?
Do you think this is a Reasonable and Accurate Depiction of Risk?

On September 28, 2019 I published a blog post in which we found that the structured settlement calculator on the site in question suggested a 6.9%-7.5% discount rate on two hypothetical deals to the seller. Thus one can deduce based on the test cases we ran, that the margins are between 1.9-3.4 % on the low side and  2.5%-4% on the high side.

Don't be baffled or bamboozled by impressive looking charts.  Factored structured settlement payment streams are what they are.