Unfortunately Chronovo Steps on an Another Advertising Duck 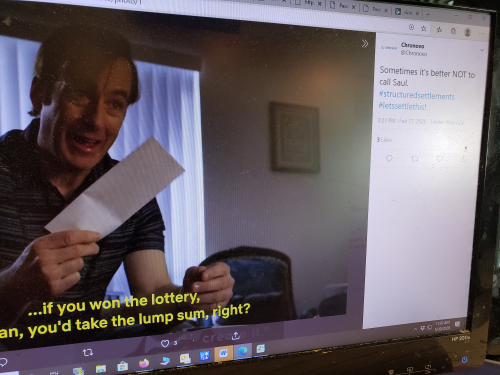 Not really thinking things through

"Better Call Saul" is a popular spinoff from the show Breaking Bad that airs on AMC.  The write up on the show is " Before Saul Goodman, he was Jimmy McGill. And if you're calling Jimmy, you're in real trouble. The prequel to "Breaking Bad" follows small-time attorney Jimmy McGill as he transforms into Walter White's morally challenged lawyer, Saul Goodman".  Says Michael Asimow, in Jewish Lawyers on Television, for the Journal of the Oxford Centre for Socio-Legal Studies "Presumably, however, McGill wishes to capitalize on the Jewish lawyer stereotype exemplified in All in the Family. Jewish lawyers get business because they are thought to be shrewder and less ethical than other lawyers and McGill definitely wants all the business he can get".

There are risks in the use of stereotypes in business, particularly when ‘Better Call Saul’ only drew 1.6 Million viewers for Season 5 Premiere, according to The Wrap on February 25, 2020. The viewership is less than half of one percent of the USA population in 2018!

Origins of the name Goodman

The name Goodman is a proud symbol of ancient Jewish culture. Before the late Middle Ages, people were known only by a single name. However, as the population increased and travelers set out on their journeys, it became necessary for people to adopt a second name to identify themselves. Jewish hereditary surnames were adopted from a variety of different sources. Two of the most common types of Jewish family names are patronymic surnames, which are derived from the father's given name, and metronymic surnames, which are derived from the mother's given name. As a Jewish (Ashkenazic) surname, Goodman comes from the male given name Gutman, which means God and man, and was a transformation of many similar sounding names.

All in the Family

In a 1971 episode of All in the Family, Archie Bunker has an auto accident with a Jewish woman driver. After spouting his usual anti-Semitic opinions, Archie realizes that he can fake a back injury and make some real money. Clearly, this requires a smart but crooked lawyer. Archie and his son-in-law start leafing through the yellow pages looking for one and find Rabinowitz, Rabinowitz, & Rabinowitz. That’s it! But the Rabinowitz firm sends over Whitney Fitzhugh IV, its token gentile. Archie throws him out and cries “Bring me a Jew!”  Sol Rabinowitz soon arrives, but the case falls apart when witnesses (a station wagon full of nuns) declare that the accident was Archie’s fault.

Norman Lear’s inspired idea for All in the Family (1971-1979) was to put all sorts of bigotry and right wing political slogans into the mouth of the buffoon Archie Bunker as a way of ridiculing those opinions. In this episode, Lear was parodying the stereotypes surrounding Jewish lawyers—they are greedy, unethical, and more cunning than other lawyers.

Saul the Lottery Winner is also a Old Dark Joke

So Saul, a 90-year-old Jew, wins the $300 million lottery. He's at the news conference to accept the check, and the reporters ask him if there's anyone he'd like to thank.

The silence was sudden and complete; you could hear a pin drop.

Finally a reporter raises a shaky hand and asks, "D-did you j-just say you w-wanted to thank H-hitler?"

Rolling his sleeve up, Saul points to the inside of his forearm. "For the NUMBERS!"

A little cultural awareness goes a long way. The CEO of Chronovo's response to my post in January, questioning the timing and apparent lack of cultural awareness of a member of the structured settlement industry, where both alternatives contemplated by the spear toting hunters portrayed in the Chronovo blog image involved killing animals revered in Asian cultures, when millions of animals were dying in Australian wildfires, was met with a "toys out of the pram" ad hominem attack. I regret that it's necessary to have to highlight something else, but it seems necessary, in my opinion.  I offered to review before their publication but so far they have not taken me up on it.  What a pity.