“Thank you, AASC, for the trust you have placed in us and for including us as part of your ongoing mission to bring the modern 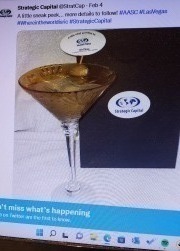 structured settlement process into the light for the benefit of more Americans.” AASC is the American Association of Settlement Consultants, a breakaway settlement industry trade association established in 2021. Strategic Capital, a structured settlement factoring company out of Toronto Canada placed so much significance on its attendance that it issued a nationwide press release that appeared in national news media all across the United States (see Download Strategic capital press release aasc - Search

Let's set the record straight. Factoring is NOT part of the Paleolithic, Neolithic or modern structured settlement processes.

The press release included the purported testimonials of the immediate past President of AASC, a former President of the National Structured Settlements Trade Association, although not specifically mentioned in their roles at AASC, and another settlement planner believed to be affiliated with the same producer group as the other two.

Was this sanctioned by the American Association of Settlement Consultants, or did Strategic Capital take a few creative liberties?

I reached out to a number of board members of AASC this morning and nobody had seen the press release. An attendee at the AASC meeting that I spoke to, expressed concerns over factoring company attendance at the meeting and whether or not settlement planning or structured settlement industry trade associations should be permitting sponsorships from structured settlement factoring companies. There was no indication from that Strategic Capital, or any other factoring company being considered for membership. Nor should they in my opinion (and that of others), as it sends a mixed message to legislators.

Ironically when it comes to "ground-breaking" assumption of imprimatur, Strategic Capital missed its own mark by about 16 years... One from the "scrap book"