Having read the plaintiff's Appellate brief in support of an effort to get a dismissal with prejudice reversed against various AIG entities,  I'm marveling at how co-counsel Richard B. Risk's own writings present a huge hole in their advocacy. One wonders if the plaintiffs Norma Ezell, Erica Biddings and Whitely et al have been made aware that lawyer Richard B. Risk Jr, also known as Dick Risk, published the following statement in a 2005 Lorman continuing legal education presentation.

"The annuity cost is really the consideration being paid by the defendant to the third party assignee (annuity company) for assuming the future payment obligation"   [Slide 50 of a 2005 Lorman continuing legal education presentation made by Richard B Risk Jr. in 2005 ] 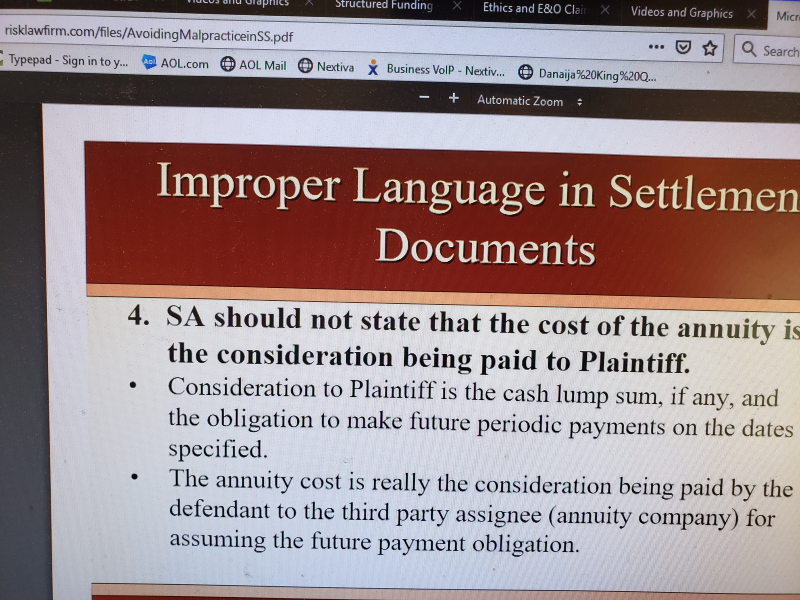 Dick Risk was a member of the Oklahoma bar at the time he published this statement and the statement was still published on the Risk Law Firm website when I first retrieved it shortly after I learned of the class action in January 2017.  Risk credits co-development of the CLE with a plaintiff structured settlement broker from Oregon and two lawyers who, at the time, were associated with the same plaintiff's structured settlement brokerage.

Risk made the affirmative statement that "the annuity cost was the consideration being paid by defendant to the assignee". The Defendant, or in this case the insurer, Lexington insurance Company, paid a sum of money to multiple assignment companies that corresponded to annuity quotes that were presumably shown to the plaintiffs and/or their counsel.  By Risk's 2005 definition, as presented to other lawyers attending the Lorman CLE, correct or not, that is the annuity cost.

In a 2004 Powerpoint presentation to the Society of Settlement Planners "Ethics & E&O Claim Prevention in Structured Settlements", Dick Risk stated  "Always use the annuity company's software quoting system to prepare illustrations, showing costs, fees, rated ages, assumptions, expiration dates, rate series and home office's disclaimers. This can eliminate a major cause of E&O".  This is the same quoting system he is now attacks. How many hundreds of thousands of commissions did Dick Risk earn (when he held an insurance license) using the annuity company's software? How often did he disclose the amount of commissions to his plaintiff clients and when did he start doing it?  Given Oklahoma's anti-rebating statute, what could he have done about it? 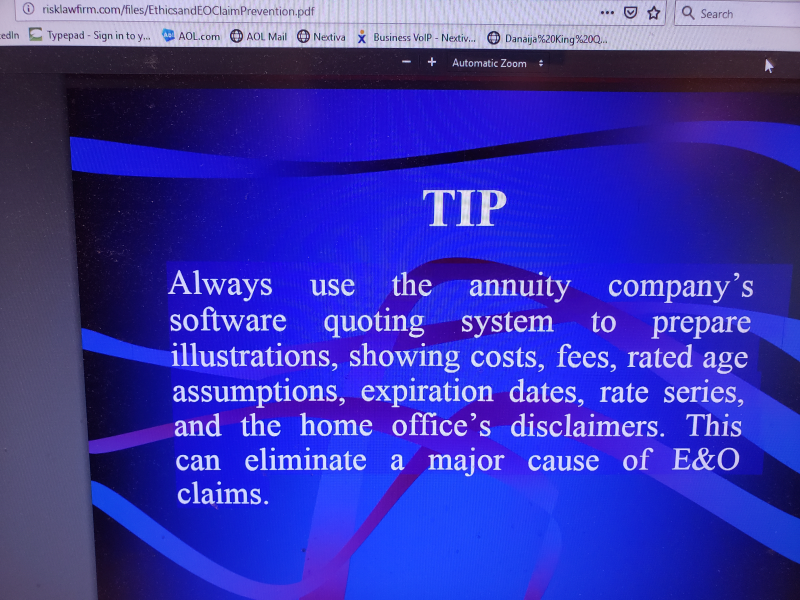 Attorney Dick Risk promoted the use of annuity company software. He also used the software when he had an insurance license and it helped make him money

What could possibly motivate Dick Risk to change his own position and put his name on a lawsuit that seems to counter what he has published for a continuing legal education seminar and conveyed to other lawyers?

Dick Risk authored a newsletter called Structured Settlements which he sold to other structured settlement brokers and settlement planners who could brand them and distribute to their clients. In the Q1 2000 issue on page 8, in an article " Common Mistakes in Structure Documents Cause Tax Liability" Risk wrote  " Once the parties understand that the money to be paid by the defense for the future payments is not the consideration- the periodic payments themselves are the consideration".   It should be noted that I have the actual newsletter. 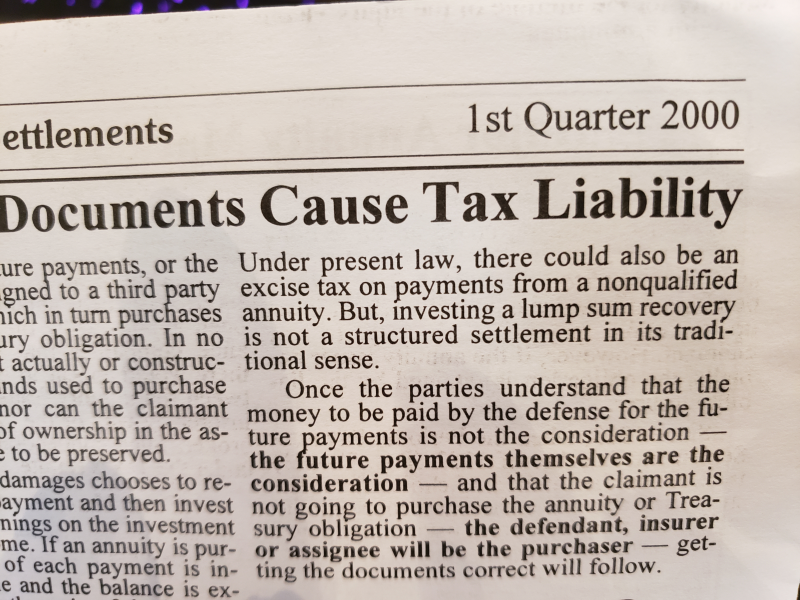 I'm not a big fan of using present value in any settlement agreement. As shown in Lyons v MMIA, a 2001 New York case, present value is a number that can be left open to interpretation because in present value calculations, the discount rate is a key variable in a process that reduces a series of future cash values to a value today.  For the financial geek in you...

N is the total number of periods

It has been said that the Erica Biddings settlement documents in the underlying case, refer to the term "present value" of $1,642,000 and plaintiffs structured settlement. Yet there is no reference to a discount rate or an agreed or assumed discount rate. In order to reduce the payments to present value, the periodic payments had to have been known to Plaintiffs and/or their counsel.

Present value is used in calculation of Article 50A and 50B judgments in New York, but the parties agree on method of calculation. To not do so, is way too random.  Present value can be calculated from the beginning of the year, the end of the year or a midpoint, each with different results.   Typically the internal rate of return of a structured settlement would exceed he bellwether 10 Year US Treasury. So if one were to take the internal rate of return of the structured settlement as the discount rate , the PV is equal to the PV agreed to in the Bidding's documents. If one backs out the commission then the PV is going to be higher because less money produces the same promised future payments. If you use the 10 year treasury as a discount rate then the PV could be substantially higher than promised. Certainly muddies the waters doesn't it?

One thing is for certain, present value should never be anywhere near a settlement agreement in my opinion unless the other numbers associated with a present value calculation are locked in granite.

On the subject of present value, in his report about Lyons v MMIA Plaintiff co-counsel Dick Risk, in a 2001 newsletter (2001-03) published and still posted on the Risk Law Firm website, stated that "the attorneys who represented the plaintiffs in the original medical malpractice claim, Lonn Berney, Ann Chase and Andrew Zweben, have settled a legal malpractice claim by Andrew and David Lyons for negligent representation".  It should be noted that neither the law firms of Beasley Allen, nor Krupnick Campbell have been sued by any of the Plaintiffs for negligent misrepresentation over the transaction at issue in the matter for which an Appeal brief has been filed. Both of these firms use structured settlement brokers and settlement planners. In my opinion it is simply not credible that either of these sophisticated law firms or the specific attorneys that represented the representative plaintiffs in the cases underlying the dismissed suit on Appeal, did not seek out brokers or settlement planners and/or would not be sophisticated enough to know the difference between present value and cost, what a discount rate is, or how structured settlement brokers and settlement planners get paid.

In the same 2001-03 newsletter, Risk confirms his knowledge of the need for discount rate in computing present value.

Attorney Richard B. Risk shamelessly promotes his poorly pleaded lawsuit against AIG in an opinion piece on The Hill published May 22, 2017.

How can any Congressman, Congresswoman or staffers lend any credence to Richard B. Risk, a licensed attorney and then licensed insurance agent who, in 2004, signed a declaration, under penalty of perjury, to the United States Department of Justice, that he had provided substantial services to defendants in each of the preceding three years. The statement was in direct contradiction to what Risk and his firm held themselves out (only serving plaintiffs), according to forensic evidence available online and also available via FOIA [ see my blog Is There a Need for a Risk Assessment?]

As I've previously opined, there are serious problems in the argument about undisclosed commissions and their impact on plaintiffs.

In 2004, the same year as the aforementioned declaration under penalty of perjury to the DOJ, Dick Risk's company website claimed that the Risk folks "always disclosed the true cost of the structured settlement". One wonders whether an audit of files from that time would show that Dick Risk disclosed the"true cost" as the cost on  the annuity issuer quote or the annuity issuer quote less the commission?  It's a goose gander thing. Download 2004 Structured Settlement Services Ethics Statement

Insurance regulation is the province of the states, the majority of which have long standing anti-rebating laws. Risk's opinion piece implies that the rebate issue is an insurmountable hurdle. It would involve each state amending its longstanding insurance laws. I imagine that Risk's inner monologue is a paraphrase of Faber College's Eric Stratten, "We could fight them with conventional weapons (state by state), but that would take years and cost thousands of lives".   No, AIG didn't "bomb Pearl Harbor".

Dick Risk does not even appear have widespread support from plaintiff advisors.