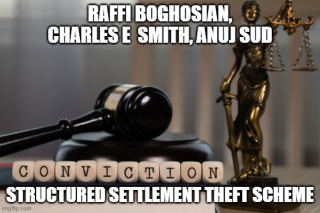 lawyer and a now disbarred lawyer, for headline grabbing theft from 94 victims.  The convictions of 43 year olds Raffi Michael Boghosian, lawyer Charles Edward Smith Jr, and disbarred lawyer Anuj Sud, relating to their involvement with the structured settlement factoring company Access Funding between 2013 and 2015. Each was found guilty of Theft Scheme Over $100,000 and Conspiracy to Commit Theft Scheme Over $100,000 after a trial in the Circuit Court for Baltimore City. Sentencing will be set in Baltimore City Circuit Court.

The shenanigans of Access Funding and the three amigos was aptly chronicled by Terrence McCoy in the Washington Post in 2015. They were in a world of poop. Lawsuits by the victims, the Maryland AG and the Consumer Finance Protection Bureau (CFPB) ensued.

Access Funding’s offices and principal place of business were located in Montgomery County. The charges relate to Access Funding’s acquisition of structured settlement payment rights belonging to 94 individuals, primarily lead poisoning victims in Baltimore City. Many victims were people of color. The payment rights had a total present value of over $21million. In exchange for the payment rights, Access Funding gave the owners cash lump sums totaling less than $7 million, and in some cases as little as 8 cents on the dollar of the payments’ discounted present value.

“These individuals preyed upon vulnerable victims of lead paint poisoning in Baltimore City,” said Attorney General Frosh in a press release. “The victims received a small fraction of the actual value of their structured settlements, depriving them of a much-needed lifeline meant to support them long term.”

Boghosian was an executive and ultimately the Chief Operating Officer of Access Funding. According to his Linkedin profile at time of posting Boghosian is the  Executive Vice-President of Reliance Funding, an entity that arose from the burning embers of Access Funding. Smith was Boghosian’s best friend and an attorney who purported to provide independent advice to every customer of Access Funding in Maryland for almost a two-year period. Sud was Access Funding’s attorney who filed petitions in court to obtain court orders transferring the victim’s structured settelment p ayment rights.

"Boghosian, Smith, and Sud prevented the 94 owners of structured settlement payment rights from receiving the
independent professional advice without which transfers of structured settlement payment rights cannot occur. Smith pretended to provide the required independent advice when in fact he was secretly receiving kickbacks through Sud when Access Funding successfully obtained Smith’s clients’ payment rights. The defendants also made or caused to be made false statements to the
court regarding the owners’ receipt of independent professional advice to induce the issuance of court orders transferring the owners’ payment rights" said Frosh.