« Typepad Resolves Service Issues Encountered During Data Center Migration | Main | Can You Do a 1035 Exchange Into or Out of a "Secondary Market Annuity"? »

American Annuity Funding of Boca Raton Florida is run by Anthony Cioppa, 32, who is attempting to build a 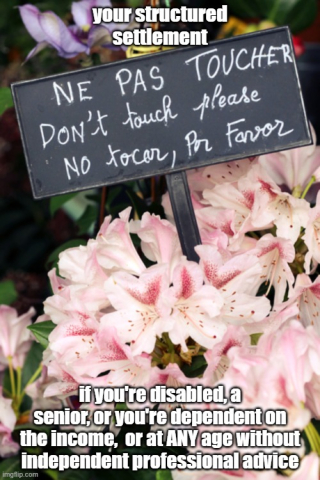 presence on social media in the stuctured settlement secondary market. I know nothing of the rates his company offers, but I would like to offer some encouragement for part of a short video posting where the structured settlement factoring company President opines on "3 Reasons You Should Keep Your Structured Settlement"

Wouldn't it be nice if structured settlement factoring companies lived up to these standards and did not take cases that fell into these categories?

If American Annuity Funding is truly living up to those standards and the majority of the structured settlement secondary market could center their conduct and messaging to, at a minimum, refrain from submitting petitions for payees fitting these criteria we might be getting somewhere.

Unfortunately the structured settlement secondary market has a lot of baggage

Here are some examples from cases I've covered:

1. When another Boca Raton company, now defunct Client First Funding approached A.D. in 2013, he was an unemployable 29 year old father of two toddlers whose structured settlement was paying $60,000/year tax-free, with a COLA, for the rest of his life. In a wholy unsuitable tranaction, Client First paid A.D. $577,000 in exchange for his tax free millions in lifetime support, that also had to also help him support his children. Fortunately A.D. contacted me right away, the money was paid back to Client First in a negotiated settlement which saw the order vacated.  A.D.'s payments were restored. He was one of the lucky ones.

2. Client First Funding was also one of the companies in the chain of 10 transactions in 2 years involving Terrence Taylor. Client First however, settled early and did not drag the litigation out by making use of lawyers in the Virginia legislature, whose rampant exercise of legislative privilege, collectively delayed the case for almost 7 years. Fortunately things are back on track, regardless of what any final resolution may bring.

3. Texas Case  "Victim of Rising Capital affiliate -"cannot live independently, and requires assistance with the most basic elements of daily life, such as bathing, changing his clothes and handling money". Alleged impact of  loss of government benefits

In The Court of Appeals Ninth District of Texas at Beaumont NO. 09-19-00306-CV FAIRLAWN ASSETS, LLC, JOHN FERRANTE, AND JARROD FREEBORN, Appellants V. BARBARA BOOKER, AS GUARDIAN OF THE PERSON AND ESTATE OF M.H., Appellee On Appeal from the 60th District Court Jefferson County, Texas Trial Cause No. B-202,429, Appellee Barbara Booker, the guardian of the person and estate of M.H., an incapacitated adult, sued appellants Fairlawn Assets, LLC (“Fairlawn”), John Ferrante, and Jarrod Freeborn, seeking to void a contract M.H. signed, in which M.H. sold to Fairlawn his right to receive annuity payments pursuant to a structured settlement agreement.  According to Booker’s petition, M.H. has several mental health conditions, has never been able to manage finances or live independently, and has minimal reading skills, poor memory, impaired judgment, and is “extremely suggestible and easily led.” Booker pleaded that Fairlawn “invoked and participated in the transaction” upon which her lawsuit is based, Ferrante is a member of Fairlawn, and Freeborn is an independent contractor that Fairlawn engaged to facilitate the transaction between Fairlawn and M.H. Booker asserted that Fairlawn was formed by one or more of the individual defendants “to effectuate the illicit exchange with M.H. with no intention to maintain Fairlawn Assets, LLC as a corporate entity conducting otherwise legitimate business.”