« The Structured Settlement Secondary Market | Let's Be Honest About Size Shall We? | Main | Judge Denies Motions of NBA All Star and Uncle in $1.5MM+ Lawsuit Brought by NY Retirement Plan/Retirees »

Joe Gargan, the convicted felon and former structured settlement broker and head of The Pension Company Inc. who purloined 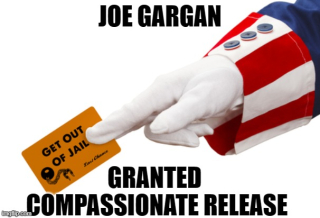 millions of dollars from the United States taxpayers and a New York City area hospital, was granted compassionate release after being incarcerated less than 2 years. The United States Department announced June 15, 2020 that Gargan pleaded guilty to the embezzlment.

Gargan spent the majority of his custody at FMC Butner in North Carolina, a joint that housed notorious felons such as the late Bernie Madoff. FMC Butner had a deadly oubreak of Covid-19.

According to Judge Rossie D.Alston, Jr. of the United District Court, District of Alexandria, Gargan" has established that extraordinary and compelling reasons justify his release pursuant to 18 U.S.C. § 3582(c)(1)(A). Accordingly, for the foregoing reasons, it is hereby

FURTHER ORDERED that the custodial portion of Defendant’s sentence is reduced to
time served; and it is

FURTHER ORDERED that the Federal Bureau of Prisons is directed to release Defendant
from confinement no more than fourteen days (14) from the date of this Memorandum Opinion
and Order; and it is

FURTHER ORDERED that upon release, Defendant shall begin serving the three-year
term of supervised release this Court imposed on September 23, 2020; and it is

FURTHER ORDERED that all terms and conditions of supervision remain in full force
and ".

IN THE UNITED STATES DISTRICT COURT FOR THE EASTERN DISTRICT OF VIRGINIA
Alexandria Division.

In related news, the domain name for ThePensionCompany.com is for sale for $24,500.00