What is going on here? I thought that United States Periodic Payment Assignment Company is an assignment company, as in 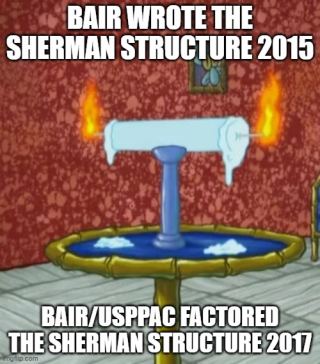 "All in the Family"

Erie County New York Court records show that United States Periodic Payment Assignment Company (USPPAC) was used to buy structured settlement payment rights from Jerry E. Sherman, a 65 year old from Grand Island New York, a former client of Buffalo law firm Paul William Beltz PC, for pennies on the dollar in April 2017, less than two years after the structured settlement annuity was issued by John Hancock Life Insurance Company and Milestone Consulting made approximately $23,800 in commissions on the $600,000 allocated to the structure from the $2,500,000 settlement for a 1999 work related injury. Both Milestone and USPPAC have common ownership as part of a suite of companies under holding company Milestone & Co, LLC  (f/k/a  Seventh Amendment Holdings, LLC.  The holding company shares are primarily owned by John T. Bair, according to the March 16, 2022 Form ADV Part 2 filing by another subsidiary of MIlestone & CO, Milestone Wealth, LLC.

In the Amended Petition dated May 9, 2017 at #3, In the Matter of the Petition of United States Periodic Payment Assignment Company for the Approval of Transfer if Structured Settlement Payment Rights In Accordance with GOL  5-1701, Petitioner vs Jerry E. Sherman, John Hancock Assignment Company and John Hancock Life Insurance Company of New York, Respondents  Supreme Court of the State of New York Erie County  Index 804461/2017, submitted by Bernadette Weaver-Catalana, Esq, of Lavin, O'Neil, Cedrone & DiSipio, attorneys for USPPAC, it is represented that USPPAC (the Petitioner) is a " transferee" as defined in GOL 5-17021(t), which states  "transferee” means a party acquiring or proposing to acquire structured settlement payment rights through a transfer or restructuring.

In Delaware, USPPAC's state of domicile, the term "transferee" means a party acquiring or proposing to acquire structured settlement payment rights through a transfer.

Who Reviewed The Documents Submitted to the Court?  Even the Amended Documents Raise Questions 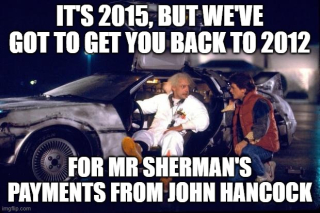 Section 8 of the Amended Petition date May 9, 2017 raises some questions about alleged facts, stating that "the Defendant's insurer subsequently assigned its obligation to John Hancock Assignment Company", when the Qualified Assignment and Release, dated April 30, 2015, lists the Assignor as the Sherman Qualified Settlement Fund. Think 1.468B-1(C)(2), the so-called  "resolve or satisfy" requirment, a very basic fundamental of QSFs. The QSF must be established to resolve or satisfy one or more contested or uncontested claims that have resulted or may result from an event (or related series of events) that has occurred and that has given rise to at least one claim asserting liability. The Defendant would have already received a General Release when the QSF was funded .

Does anyone need to fire up the DeLorean (left) ?  The paperwork for the Establishment of the QSF was not attached to the Court record. One possible explanation (and this aspect is speculation on my part) that the QSF was established at or about the time the Sherman v Hervert C. Hales case (Erie Counnty Index 0005837/1999) was settled by pre-trial stipulation on  April 12, 2011 in front of Hon John  M. Curran. The QSF was subsequently funded in February 2012, or earlier, given the date of February 20, 2012 on the John Hancock application that bears Bair's signature. Is it possible that David J. Reino, the Administrator of the Sherman QSF agreed to advance fund the Sherman structure to protect the rates?

Copy of John Hancock Life Insurance Company of New York annuity with application signed by John T. Bair,  Conclusive evidence that Bair write the Sherman annuity and together with the court filed papers in this case, present yet another example that Bair and/or companies Bair owned or controlled, engaged in factoring cases he wrote.

As the examples continue to present themselves in New York court records where a transaction was initiated by CrowFly, Seventh Amendment Holdings  (now MIlestone & Co, LLC) or USPPAC, one naturally wonders whether there was an active campaign to mine and market factoring services to individuals who are, or were receiving periodic payments from a structured settlement brokered by Bair/Milestone Consulting (2012-present) or Bair/Forge Consulting  (pre-2012). I've written about Bair/Milestone's mass communication to trial lawyers in April 2020, to get their clients out of annuities.