If You Have a Structured Settlement, Beware "Slap On" Charlatans

Because the structured settlement factoring industry offers no professional credentialing programs, some of its members 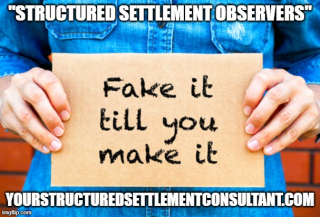 (henceforth may be referred to as the "Slap Ons") have slapped on labels or credentials they have not earned or have appropriated from the primary market, in some cases including insurance company trademarks to generate leads and bamboozle consumers. This has been going on for almost 15 years and should not be tolerated.

The website yourtstructuredsettlementconsultant.com has slapped on the label of "structured settlement consultant".  At the time of posting

A Digital Journal promotion of yourstructuredsettlementconsultant.com is an attempt to gin up the company, claiming that "it is a local company, that has been making a buzz around the country... for making a difference for people selling their future payments. Their business model is as simple as it is good: find people who are currently getting ripped off when selling their structured settlement and pay them more. And now they are being recognized by the 'Structured Settlement Observers' for their excellence in the field".

According to its website, "Digital Journal is a Canadian Internet news service that blends professional contributions with user-submitted content. Digital Journal began as a technology and gadget magazine in 1998 and evolved into a global citizen journalist news hub in 2006. The company is headquartered in Toronto, Canada and shares advertising revenue with citizen journalists who report for the site".

So let's drill down on this. Digital Journal is a Canadian Company based in Toronto. The reference to a "local company". Selling structured settlement payments is not permitted in Canada. The Digital Journal Post was posted on the LinkedIn Account of Abhivandan Nagia, Director at AB Newswire, a PR newswire, based in Manassas Virgina.  However Abhivandan Nagia's Facebook profile says he lives in India. His wife's Facebook profile says she lives in India as well.

What will the " Slap Ons" come up with next?

Who are the " Structured Settlement Observers"?  Funnily enough, structuredsettlementoberservers.com was registered at Name.com  (same domain registrar as yourstructuredsettlementconsultant.com), on April 15, 2022.  At this point there is no website for that domain name. Another Slap On?  We'll see!

Five phone calls to 786-861-0755, the phone number listed for yourstructuredsettlemnetconsultant.com at FIVE separate times inside and outside of East Coast business hours and were met with a robo-greeting that said they will put you through to "an adviser", but nobody ever picked up.