« Is There a Monolith Advisors, LLC AUM Disparity? | Main | The Structured Settlement Process | Annuity.Org Cites 10 Sources and Still Gets It Wrong »

Can a Black Man with Structured Settlement Actually Get Timely Adjudication in Virginia?

Virginia Trial Lawyers should be outraged that a disabled black man's legal case, a December 27, 2015, lead story about Terrence Taylor in the Washington Post, has languished for almost 7 years, stemming from delay tactics by parties who benefited from buying his structured settlement payment rights for pennies on the dollar, that are grossly disproportionate to the 24 months it took to erode the victim's financial security.  After all, Terrence Taylor's structured settlement was established when he was a minor and he and his parents were Virginia residents represented by a Virginia trial lawyer.

Should a "Bartender Standard" Apply to Structured Settlement Protection Laws?

For over 20 years, the National Association of Settlement Purchasers (NASP) claims to have been a leader in setting standards and implementing best practices in the secondary Market for structured settlements. Is it acceptable under those standards to be a "bartender," metaphorically speaking, to pour and continue to pour drinks (i.e., profit) to a patron that is obviously impaired or drunk?   It seems that only the "you're a big boy, big girl, adult" standard applies. Is that sufficient?  Hardly.

In a Washington Post article on December 27, 2015, Taylor was quoted about former 123 Lump Sum point man Rhett Wadsworth, "In interviews and court documents, Taylor said the purchasing companies “coached” him in coming up with “false” reasons to explain why he needed the money. In one affidavit that Taylor signed, it said he needed money to pay down credit-card debt. Another said he wanted money to start a nonprofit organization. All of these explanations, he now says, were not true. They “were Rhett Wadsworth ideas. Rhett said it had to look good on paper for the judge to approve it.” Wadsworth worked for Structured Asset Funding/123 Lump Sum at the time the "bar was open".

As the Washington Post observed January 4, 2016, "the fact that Mr. Taylor was able to strike 10 deals with four companies over two years with apparently no one raising an eyebrow about the wisdom of his selling off 30 years of income raises questions about the process that governs these transactions". This is exacerbated by the fact that to this day there is no licensing standard in Virginia that governs sales practices in the Commonwealth. The lack of licensing and the regulation of sales practices enables bad behavior. A viable deterrent is necessary to stop the opportunists.

It's Not Only Sellers Who Suffer

Sellers aren't the only ones who suffer. Investors in structured settlement payment rights can also become victims as these bad deals are discovered and litigated.  Mr. Taylor's plight should be of concern to the citizens of Virginia, every structured settlement annuitant, every trial lawyer in America and investors in structured settlement payment rights (some of whom are parties to this litigation). Should an investor have known that what they were buying was the 5th, 6th, 7th 8th, 9th or 10th instance in a very short time frame? It seems to me that it's an obvious risk. How was that disclosed to the end investors by the factoring companies? 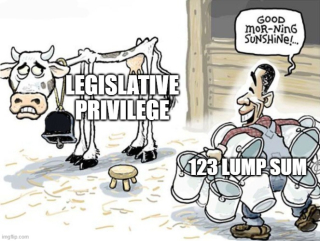 123 Lump Sum (and related companies), out of Fort Lauderdale Florida, has chosen to make judicious use of hiring legal counsel who serve in the Virginia legislature concurrent with representing 123 Lump Sum and affiliated defendants. In doing so over 7 years, two sets of lawyers have exercised legislative privilege, something that they are able to do under Va. Code §30-5. One of the lawyers exercised legislative privilege 8 times! In doing so, by the time of the next hearing August 24, 2022, the case will have not even passed the preliminary motion stage after 7 years!  Let that "disproportionality" sink in.  Is this what the Virginia Legislature intended? What could possibly be the reason for this I ask?  Have 123 Lump Sum lawyers exercising legislative privilege on their other cases too? That is certainly something that should be examined under the circumstances.

One of the allegations from Taylor's camp in their counter claim is that Taylor was not a resident of Virginia, and that solicitation took place while he was a resident of West Virginia. A similar allegation against 123 Lump Sum appears in Philip Lape, Plaintiff v Structured Asset Funding, LLC d/b/a 123 LumpSum, Insurance Company of North America, and Life Insurance Company of North America, Defendants New York State Supreme Court County of Monroe Index E2020003377 filed May 26, 2020, 5 years after Taylor. Download Lape v 123 LumpSum 2020-05-26 E2020003377 SUMMONS___COMPLAINT  In that case a Rochester New York man filed a complaint against Fort Lauderdale based Structured Asset Funding, LLC d/b/a 123 LumpSum alleging a fraudulent scheme that involved faking the Plaintiff's relocation to Florida and the filing of two fraudulent structured settlement transfer petitions in Charlotte Circuit Court.

After multiple judge assignments and recusals from the Portsmouth Circuit, Judge Charles Maxfield from Fairfax was assigned to the case. Instead of the pandemic era standard virtual hearing, an in-person May 2021 hearing was called in a case where 20 plus motions are outstanding, some for over 6 years. Why was it postponed?  Due to Maxfield's concerns about the Colonial Pipeline hack. Poor planning meant justice delayed, again.

Then 5 months later, in an October 2021 hearing, Maxfield seemed to be in tune with the travesty that came before his assignment, describing the delay as "shameful" and wanted to move things along.  However, after Maxfield disqualified former counsel Steve Heretick, addressing a motion pending for years, 123 Lump Sum waited until just before a December hearing over an interpleader motion, to retain a new lawyer, a member of the Virginia Senate, who promptly asserted legislative privilege. That has resulted in a further 8-month delay to hear the same single issue that was to have been heard in December, one of the more than 20 motions that have been outstanding. Essentially, as long as a judge continues to allow it, 123 Lump Sum can keep on replacing counsel with another member of the Virginia legislature and rely on legislative privilege until Terrence Taylor dies.

The optics are terrible for 123Lump Sum as a result. It also reflects badly on NASP and its claims of leadership in setting standards. It is neither a badge of honor for 123 Lump Sum nor for any of the lawyers involved. In my opinion knowledge of such tactics is important for consumers to know while evaluating whether or not to do business with 123 Lump Sum. In close to 17 years of observing this industry, I can't recall any other company that has engaged in this conduct.

Virginia has a Structured Settlement Protection Act. It was amended in 2016 after the 2015 Washington Post expose about the Taylor case written by Terrence McCoy and other contemporaneous criticism of its laws.

The Bill Was Sponsored by 123 Lump Sum's New Lawyer

Ironically, the bill SB621 was sponsored by Sen. Bill Stanley (R-Franklin County), who according to a contemporaneous article in the Virginia Pilot, "was inspired by the (Washington) Post’s article. that required structured settlement agreements to be vetted by a court where the seller lives".

What Does to Vet Mean?

"to make a careful and critical examination of (something)"-Oxford Languages