As part of ongoing commentary and examination of potential conflicts of interest on the structured settlement primary, secondary and tertiary markets and how companies are addressing (or not addressing) them, the New York Court records has helped connect a few dots. 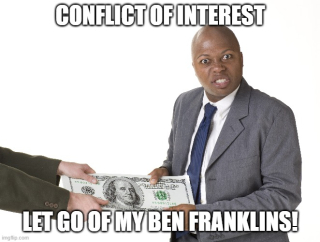 Upon information and belief John T. Bair was the CEO of both Milestone Consulting and CrowFly, LLC in January 2021. In what was described as CrowFly's new company brochure and available for download on December 16, 2021, Bair is described as CEO and co-founder of CrowFly, LLC. The Adobe meta info for the brochure shows it was produced in August 2021. A video posted to Vimeo 8/2/2021 captioned Bair as CEO.  In January 2022, the company issued a press release announcing that Nita Bhatia had been elevated to CEO.

Dutchess County 2020-53424  CrowFly, LLC vs Alexander Arrighi submitted October 23, 2020. The structured settlement had been placed by Milestone as part of the settlement of a Westchester County podiatric malpractice case in January 2014 with Liberty Life Assurance Company of Boston (now Lincoln Life Assurance Company of Boston). It was a client of Robert F. Danzi, a plaintiff lawyer from Jericho New York. A 6.02% discount rate was charged according to the statutory disclosure in Dutchess County court records. CrowFly paid $40,000 in exchange for about $81,000 in future payments, the farthest out part of the payment stream. No Independent Professional Advice.

In addition to the signature block which is poorly disguised so as to remove all doubt as to it being Mr. Arrighi, the publicly filed Florida disclosure (Exhibit B to the Petition says this. How do you pay for something and not be responsible for it? How many eyes looked at the disclosure? 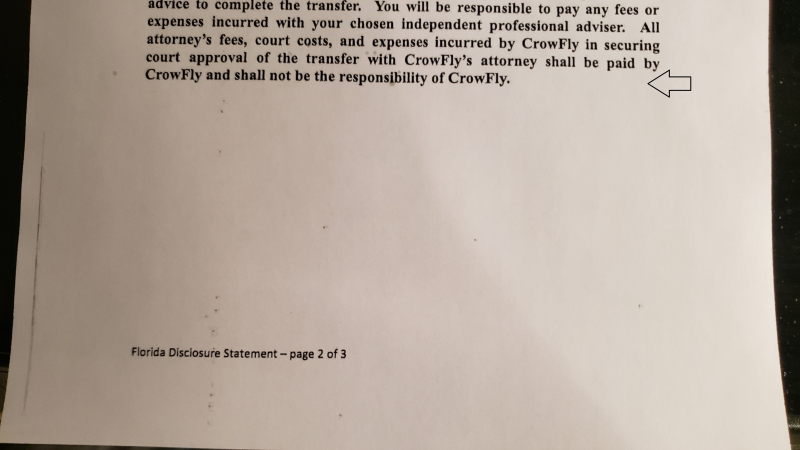 A structured settlement was placed by Bair with Prudential Insurance Company of America from a Qualified Settlement Fund in 2009, when Bair was a principal of Forge Consulting in Buffalo. The QSF trustee Mike Dansa CPA of Dansa D' Arata & Soucia, a Buffalo based accountant (also Bair's accountant, according to our sources) was the QSF trustee. I understand that he has acted as a QSF trustee on other cases with Bair. The defunct Buffalo law firm of Siegel Kelleher & Kahn was the lawyer of record when the structured settlement was established.  Siegel Keller & Kahn paid Mike Dansa's fee according to court records. The above two transfer petitions were subsequently done by CrowFly, LLC for a transfer of structured settlement payments

In a recent press release, CrowFly boasted of a 300% increase in business. Given the above sample, it seems reasonable to ask how much of that was obtained from remarketing structured settlement payees referred by the nation's trial lawyers and from structured settlements placed by John Bair?

In a July 23, 2020 blog post I raised the question about a Need for More Transparency About Seventh Amendment Holdings, Milestone and CrowFly stating

"John T. Bair has written several blog posts on behalf of Milestone Consulting, LLC and Crowfly, LLC questioning the relevancy of structured settlements Milestone Consulting has communicated to trial lawyers to eliminate annuities from their client portfolios and settlement plans on April 20, 2020. Milestone and CrowFly, LLC operate out of the same address, 737 Main Street, Suite 100 in Buffalo, New York. In spite of adopting the trendy fintech label, John T. Bair put in writing in an October 3, 2018 communication, from his Milestone Consulting email to a third party in the secondary market, that he is "the only primary market and secondary market origination firm that he knew of".  I believe he may have been the second after the Delta Settlements/Rescue Capital combo in or around 2012.

The Consumer Financial Protection Bureau defines origination as "any service involved in the creation of a federally related mortgage loan, including but not limited to the taking of the loan application, loan processing, the underwriting and funding of the loan, and the processing and administrative services required to perform these functions.  Structured settlement factoring origination is something different than simply a fintech platform.

In closing let's be crystal clear, structured settlement factoring is not illegal. Bair's case is striking because of the unusually aggressive communication in April 2020 about getting clients out of structures and annuities.  Moreover, CrowFly recently announced that it had joined the National Association of Settlement Purchasers (NASP).  I think we're speaking of an obvious question of optics and perception.  Companies with common ownership that place structured settlement annuities, actively participate in the factoring and refactoring of structured settlement payment streams and marketing of factored payment streams to investors. In 2006, when Allstate began its Advanced Funding Exchange program as a lower cost alternative for its own annuitants, so many settlement planners whined about the conflict of interest. Same in 2018 when Berkshire Hathaway introduced its Hardship Exchange Program.