BBB of Maryland's Far-Fetched A+ Rating for Maryland Banned Company

BBB of Maryland has bestowed a dubious A+ rating on AnnuitySold LLC, associated with fraudster Richart Ruddie, whose textbook frauds were cited 18 times in a 2021 Utah law review treatise by UCLA Law professor Eugene Volokh.  Richart Ruddie Annuity (as Ruddie is now apparently self-identifying with a suffix since the last week or so in SEO circles) and his Owings Mills High School friend Ryan Blank, were associated with a number of companies (AnnuitySold, Uber Funding, Axis Funding, Bendermere Funding and others) that were banned in 2018 from doing business in Maryland for 7 years, after a Maryland Attorney General investigation into AnnuitySold fraud.  The telephone number on the BBB listing for AnnuitySold LLC was not working at the time of publication.

BBB of Maryland also kept an A+ rating on Mount Airy Maryland resident David Springer's Sovereign Funding Group in 2015 despite proof in 2013 that Springer admitted under oath in a deposition to submitting two fictitious names to the BBB, both aliases that Springer testified in a June 28, 2013 deposition that he used. See BBB of Greater Maryland Gave Mt Airy Faker David Springer's Defunct "Entity"  A+.

BBB of Maryland, surely you can do better. How does a Maryland consumer differentiate a fraud from an honest company if relying on the BBB's current practice on display?

"On January 8, 2018, Maryland Attorney General's Office announced a settlement with Annuity Sold, LLC and its affiliate companies to resolve allegations that the business violated the Maryland Consumer Protection Act by misleading injured Marylanders, some of whom are victims of lead paint poisoning, to convert future structured settlements into immediate cash. Under the settlement agreement, the respondents are required to pay full restitution in addition to civil fines and costs. The respondents are also banned from doing business in Maryland for seven years".

Additional information about this matter may be viewed at the link below:
http://www.marylandattorneygeneral.gov/press/2018/010818.pdf" 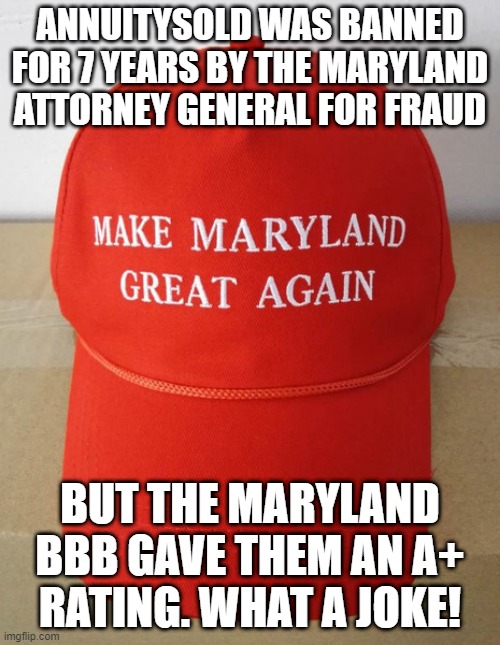