A new lawsuit filed in Pima County Arizona alleges Plaintiffs entrusted Defendants as fiduciaries to secure and guaranty a $400,000 inheritance for Richard Hansen in a reliable means of support for him over the next twenty years. It further alleges that as of the filing date, one or more of the Defendants has conspired to steal or to conceal the theft of Hansen's $400,000 and to perpetrate a fraud on Plaintiffs which is demonstrated by a forged agreement signed shortly after the money was transferred to SMA HUB and never disclosed to Plaintiffs. [Richard J. Hansen, a  single man, and Richard J. Hansen Trust, Plaintiffs v Steffey et al.  AZ. Pima County Case C20214202]

Rather than simply transferring a lump sum of funds directly to Richard Hansen, a 65 year old man who would have a difficult time managing the same due to 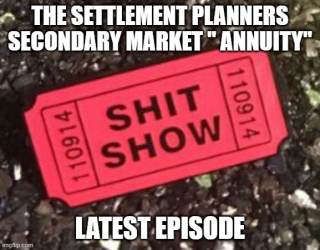 his disability, the RICHARD HANSEN TRUST through its Trustee set out to establish a structured, guaranteed annuity that would both provide monthly support payments for Richard and protect his right to Medicare and related health care needs.  On March 30, 2019, the trustee turned to settlement planner Dean Steffey, according to the Complaint filed in Pima County Arizona Superior Court on September 3, 2021.

What is an Annuity in Arizona?

According to the Guide To Annuities For Seniors published by the Arizona Insurance Department v20150507, "an annuity is a contract. An insurance company agrees to pay you income at regular intervals in return for premium payments".

The pleadings allege that the trustee specifically identified to Dean Steffey that services sought would be to provide an annuity for a severely brain damaged adult male who had received an inheritance. The pleadings further allege that communication further specified that if possible the annuity should be able to "issue monthly payments maybe through an annuity that can earn interest but is secure".

“I received your message and have confirmed the annuity trust account for Richard Hansen. The attached illustration for Richard is based on an initial funding premium of $400,000 and would pay to him a monthly benefit of $2,500 per month, for 20 years, 240 payments guaranteed, beginning one month from funding on 8/15/2019 through 7/15/2039 with an additional final lump sum payment of $3,474.92 on 8/15/2039. The total guaranteed tax-free payout is $603,474.92. Because you mentioned that you were ready to proceed with this annuity, I have based these figures on a July 15th purchase date. Please be advised that the terms can only be secured if we can commit to the purchase by the 15th and I lock in the rate.”

The above cited quote alleged to be made in an email by Blevins, who is not presently licensed as an insurance agent in Arizona  (search of AZ insurance database on date of publication), uses terms such as annuity and premium. Only it was not an annuity as defined by the Arizona Insurance department  [ Source: Arizona  Guide to Annuities for Seniors  see above ]. Even under California Insurance law, where Blevins is domiciled,  what was being sold was not an annuity .  To wit  "An annuity is a contract between you and an insurance company. You buy the annuity by making one or more premium payments to the insurance company. The insurance company makes income payments to you, for life or for a limited time".  {Source: California Department of Insurance Annuities: What Seniors Need to Know Revised 2018]. A premium is "an amount to be paid for an insurance policy". What the heck was Blevins thinking?  And it wasn't tax-free either!  So what was it?

It wasn't an annuity, it was an assignment of rights to certain agent's fees due to the sports agent for NBA player Paul Millsap of the Brooklyn Nets (who was playing for the Denver Nuggets at the time of the purported deal), flowing through a daisy chain of transactions, being held out as as an annuity. A document that appeared in the Purchasers Closing Book includes terms such as Terms and Conditions of SMA Purchase  (Secondary Market Annuity Purchase), verification of insurance carrier,  confirmation of insurance carrier, original annuitant. There was no insurance carrier!

According to the Complaint, "Blevins and Steffey issued wire instructions to the trustee for the $400,000 inheritance to be sent. The next day, July 18, 2019, the $400,000 was wired to HUB Business Trust's account at Northwest Bank in Lake Oswego, Oregon.  Blevins confirmed receipt by SMA Hub in her email on July 19, 2019 and that  direct deposit would be established in time to meet the first start date.  An ACH authorization was signed by the trustee on August 9, 2019 authorizing direct deposits from Goldstar Trust, SMA Hub's servicing company, directly into  Plaintiff's personal checking account".

The same day the trustee signed the ACH form, August 9, 2019, a syndicated article appeared in the Washington Post about a pro athlete cash flow  deal that went bad, involving football player Michael Vick. The article said that NV Partners LLC alleged that Vick received $400,000 in September 2018 and in  exchange promised to pay NV Partners LLC up to three years rerouted from two of his employers to  NV Partners LLC. Unfortunately the deal soured and NV Partners LLC had not been paid since January 25, 2019. according to the article, more than 6 months prior to when the Hansen deal went down.

Who is SMA Hub?

SMA Hub is a tertiary market intermediary that acquires (acquired) payments streams and that are (were) then sold to investors through financial advisers, such as Steffey and Blevins using "secondary market annuities" or "annuities" as a scam label.  Factored structured settlement payment streams are not recognized as insurance products by the National Association of Insurance Commissioners in its Statutory Issue Paper No. 160 (Proposed December2018 and finalized April 2019). A screen shot of the SMA Hub website captured June 30, 2019 by WayBack Machine stated "When the original owners of payment streams sell their future payments for cash today, a secondary market annuity derivative is created. "The term secondary market annuity refers to structured settlement payments, period certain immediate annuities, and lottery payments. The payment stream is an existing, fixed receivable or derivative".

Despite what was on the SMA Hub website, co-Defendants SMA Hub Director of Business Development Dylan Mumm and Jannae Pavolich contacted Plaintiffs and Defendants Dean Steffey and Kathleen Blevins advising that they had received the $400,000 deposit and were working with Goldstar Trust to set up the annuity payment, according to the Complaint.

As members of the Society of Settlement Planners, Steffey and Blevins should be aware of the organization's Standards of Practice adopted in August 8, 2017

One relevant to the case at hand is the following:

"Prior to making recommendations to a client, it is necessary for the settlement planner to assess the client's financial situation and to determine
the likelihood of reaching the stated objectives. The settlement planner will utilize client-specified, mutually agreed upon, and/or other reasonable
assumptions. Both personal and economic assumptions must be considered in this step of the process. These assumptions may include, but are not
limited to, the following: Personal assumptions, such as: retirement age(s), life expectancy(ies), income needs, risk factors, time horizon and special needs..."

The first and payment was received on August 16, 2019, but payments came from NV Partners LLC (also a named Defendant) even though it was not authorized to make such deposits. The second payment on September 16, 2019 was the same. The third payment on October 16, 2019 came from Goldstar Trust, the company contracted to make such payments via ACH. Thereafter payments came from NV Partners LLC until payments mysteriously stopped after the April 16, 2021 payment.  NV Partners LLC is an entity that does business as Hub Business Trust the entity  to which Blevins instructed the trustee to send funds.

In July 2021, Plaintiffs learned from Goldstar's VP that Goldstar had only received one payment from SMA Hub to cover the mandatory monthly payment. Goldstar representatives advised Plaintiffs that the account was being deactivated or closed for inactivity.  Goldstar advised Plaintiffs that they had no idea where the $400,000 was and that efforts to reach SMA Hub in another matter did not go through. Plaintiffs also learned from Steffey and Blevins that their calls did not go through either. On September 9, 2021 the website for SMA Hub is a potential security risk as its SSL certificate has expired.

Plaintiffs had not been provided with the internal documents between Defendants establishing their internal financing agreements. Plaintiffs allege they had received written guarantees from Defendants STEFFEY and BLEVINS that the Plaintiff’s monthly annuity payments were secure and were guaranteed for twenty (20) years. With Defendants GOLDSTAR, BLEVINS and STEFFEY unable to identify where the $400,000 was that Plaintiff had provided to them for the guaranteed secure annuity and with Defendants SMA HUB and WALKER not answering their phones, Plaintiff’s Trustee requested that Defendants STEFFEY and BLEVINS produce all the contract documents. Plaintiff’s Trustee also requested that Defendant GOLDSTAR TRUST produce their entire file.

On or about August 27, 2021 Defendant BLEVINS advised that she had a signed page from the “PURCHASE AND ASSIGNMENT AGREEMENT between
Atlantic Solutions, LLC and the Richard Hansen Trust”. The page produced had spaces for two signatures – one for Defendant JUNDANIAN and one for the
RICHARD HANSEN TRUST. That page produced only showed one signature set out in the space below the RICHARD HANSEN TRUST. The signature is an
attempt at writing Andrea Waters, Trustee. There is no signature in the space for Defendant JUNDANIAN.  Trustee avowed to the parties and the Court that the purported signature Andrea Watters , Trustee is a blatant forgery.

BLEVINS was unable to advise where she obtained the forged document, but was able to ascertain that it was received on or about December 12, 2019, according to the Complaint.