Niagara County New York Supreme Court Judge Matthew J. Murphy , is yet another fine example of why New York judges are among the best in the USA in 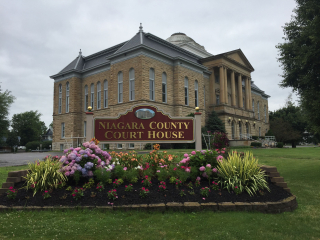 The petition involved the proposed transfer of structured settlement payment rights from 4 structured settlement annuities due to a 23 year old, with aggregate payments totaling $2,313,704.40 in exchange for an aggregate purchase price of $895,647.03. The effective discount rate according to the mandatory disclosures was 6.10% which, while not bad, still had a considerable amount of fat. Our sources indicated that between $1,000,0000-$1,122,456.99 would have been possible.

Sacco & Fillas was the law firm representing the settlement purchaser, Tiger Parrish , LLC. True to form with some of the Sacco & Fillas petitions I've seen, their cited case support for discount rates are what one might irreverently and figuratively describe as "antediluvian".

Judge Murphy's thoughtful analysis reviewed prior transfers and attempts to transfer along with reasons that were stated in the prior petitions. The current petition reviewed by Judge Murphy also reviewed the budget and expenses , but noted that the Petition and the seller's affidavit " do not provide a complete picture  of the seller's financial landscape". The Judge went into granular detail and said that "in order to make a best interests' determination, as required by law a full explanation of the settlement must be provided."

But the kudos in my opinion for Judge Murphy are deserved for noting that payments would be sold at a discount diplomatically skewering the investment projections. The Petition to Transfer included Exhibit 14 labeled IPA included an investment projection with a 12.5% rate of return, but apparently fail to take into account income taxes and there appeared to be no stochastic analysis  (also known as Monte Carlo analysis) that take into account multiple variables!  Download Eglow Investment Projection Linear 12.5 pct

Judge Murphy observes that " investing in the stock market always  involves some risk. Additionally, despite the voluminous documentation there is no simple comparison of what Mr. M. (the seller) can expect to receive now; and an explanation of the safeguards which will be imposed on the proceeds of teh transfer so that Mr M. is not able to liquidate said proceeds without Court approval.  Nor has  Mr. Eglow provided, at a least in simple comparison, any analysis of the tax consequences of investing in the stock market compared to annuity payments. It is the Court's understanding that the annuity payments are not taxable. If that is correct, it could affect Mr. Eglow's analysis".

(ii) who is not in any manner affiliated with or compensated by the defendant in such settlement or the transferee of such transfer;  and

(iii) whose compensation for rendering such advice is not affected by whether a settlement or transfer occurs or does not occur;

The papers say that Eglow and his firm will be providing financial planning services (for which he will presumably be compensated).

A December 15, 2020 letter from Jeffrey Eglow, of Newbridge Securities was submitted December 16, 2020 to Judge Michael Cresitello in support of a Middlesex NJ Petition to transfer involving Park St Closing LLC.  In the letter Eglow represents that he has had "many discussions regarding all aspects of her transaction and my advice, I respectfully request her transfer"  (emphasis added). It is evident in my opinion, that either there wasn't any discussion about the market in discount rates for income payments that begin in 2020 on one of the deals and 2021 on another with the third being a deferred transaction, or Eglow was brought to "the dance" by those charging her 12% plus . Selling a structured settlement is a money loser, 100% of the time.  Instead of investing x$, with a more competitive discount rate, the seller in that case might have considerably more to invest, or she might not need to sell as much, just like the Niagara County case, but with much worse discount rates in 3 separate deals bearing discount rates of 12.8*, 12.81% and 12%. There were hundreds of thousands in the factoring profit spread, according to our sources.  See Park St Closing LLC v Moronta C  Case# MID-007817-20.