CrowFly, LLC has moved on from email blasting lawyers to email blasting the structured settlement industry in a letter many received in the past few days from co-founder and CEO Tony Barnes. Barnes co-founded CrowFly, LLC along with its former CEO and current Director John Bair, the CEO of Milestone Consulting and Seventh Amendment Holdings, LLC  and COO Nita Bhatia.

"Tired of hearing that your clients have factored payments at 10%, 15%, or even 20% discount rates? Thousands of individuals make this decision every year despite distrusted industry players and elevated discount rates.

"CrowFly(dot)com was created to help solve this problem. We can't stop people from the urge to get money in their hands now rather than later. But we can educate them on how much those payments can really garner and provide a better outcome in the case that they need the funds.

Barnes says the "service connects an expanding group of qualified buyers to those who already wish to sell". The results they claim are easy to see. Industry norms for factoring transactions were recently stated as 7% - 18%. Barnes states that CrowFly is averaging 6% (discount rate) this year. Recently being able to go as low as 4% for one transaction.

"At CrowFly says Barnes, we understand that selling the rights to structured settlement payments is not the right thing for everyone".  Which makes it all the more interesting that its co-Founder and former CEO John T. Bair sent a Milestone email blast to on April 20, 2020 to get out of annuities and continues to beg the obvious question. Is Milestone providing information about its client lists to CrowFly to solicit those annuitants to sell their structured settlement payments?

Barnes continues "Investors using our service also know that earning even close to 4% on payments from A++ rated insurers is a good thing. You see that everyday when trying to find the best pricing for your clients' settlement annuities".

Barnes asks "Tell me how we can do better".  Here you go "Barney"!

John T. Bair has written several blog posts on behalf of Milestone Consulting, LLC and Crowfly, LLC questioning the relevancy of structured settlements Milestone Consulting has communicated to trial lawyers to eliminate annuities from their client portfolios and settlement plans on April 20, 2020. Milestone and CrowFly, LLC operate out of the same address, 737 Main Street, Suite 100 in Buffalo, New York. John T. Bair put in writing in an October 3, 2018 communication, from his Milestone Consulting email to a third party in the secondary market, that he is "the only primary market and secondary market origination firm that he knew of".

The Consumer Financial Protection Bureau defines origination as "any service involved in the creation of a federally related mortgage loan, including but not limited to the taking of the loan application, loan processing, the underwriting and funding of the loan, and the processing and administrative services required to perform these functions.  Origination is something different than simply a fintech platform.

In June 2018, Nita Bhatia returned a call from 716-883-1833, a number with a Milestone caller ID and known to me as one used with by Bair in his structured settlement insurance agency) to my call that I made to an entirely different number that appeared contemporaneously on a website called Enuities.com (which included a claims "to beat JG Wentworth by 50%".  Bhatia told me Structured Settlement Exchange was owned by one of Bair's/Milestone's upstream holding companies.

We know that there are three co-founders  Bair, Barnes and Bhattia.

Seventh Amendment Holdings, LLC applies for Trademark for What Would Later Be Called CrowFly, LLC

Upon information and belief CrowFly has a more than $1,600/day Adword (pay per click) budget.

According to Carl Hunley, who "received an opportunity to work with John Bair to rebrand his company Seventh Amendment Holdings, LLC" and created a design around a timeline that used the size and color of spaces in the timeline "in order to represent each of the FIVE subsidiaries under the Seventh Amendment Umbrella"  (Milestone, Monolith, Bairs Foundation and two assignment companies United States Periodic Payment Assignment Company  (USPPAC) and Global Periodic Payment assignment Company (GPPAC). No mention is made of CrowFly, although to be fair, CrowFly became Crowfly in October 2018 with the name change from Structured Settlement Exchange. It is not clear when this " Refreshing the Brand" took place.    But again, Seventh Amendment Holdings sought the trademark application and per the USPTO TESS database is currently is the owner of the  word mark " structured settlement exchange" as defined in the resulting registration. 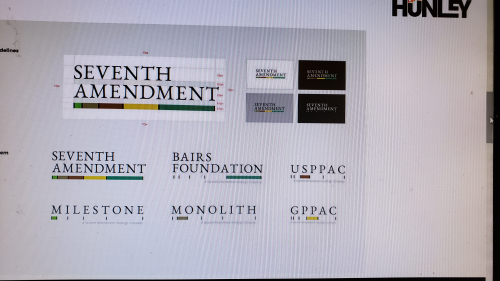 What I wrote in June 2018 about the optics still rings true. in my opinion.  The idea of an exchange or marketplace is not a bad one. However, despite what I'm sure were good intentions, common controls and/or ownership and operation with an individual or entity that owns at least 5 companies with a "spaghetti junction" of potential conflicts of interest.  How is that being managed? The answer should not require an attempt to secure an NDA,  multi-year non compete and $100,000 liquidated damages clause. This needs to be transparent.

It cannot be disputed that Milestone and its CEO are big proponents of QSF's. Its holding company, Seventh Amendment Holdings,LLC is a frequent administrator as admitted by Bair in several writings.

(4) the assignee is not related to the transferor (or transferors) to the designated or qualified settlement fund within the meaning of sections 267(b) or 707(b)(1); and
(5) the assignee is neither controlled by, nor controls, directly or indirectly, the designated or qualified settlement fund. For purposes of this section 4.01(5), examples of control include an assignee that is a corporation the stock of which is owned by the fund or an assignee that is a trust the trustee of which is the administrator of the fund

The marketing of factored structured settlement payment streams to investors in concurrent fashion, raises an eyebrow, in my opinion. To be fair, in my opinion, Bair should divest his interest in Milestone and go into the factoring business full-time, or relinquish CrowFly.