Why should any structured settlement annuitant trust a " settlement advocate", when that person was involved in a group of entities that were banned from doing business in his home state of Maryland, for 7 years?

Settlement Advocates purports to be an "settlement advocate", but is associated with Ryan Blank from Owings Mills MD, a Director of and under whose leadership Annuity Sold, 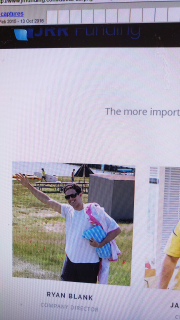 LLC and related companies were companies banned in Maryland for 7 years for deceptive and misleading business practices, following an Attorney General investigation that was announced in January 2018. Read the Maryland Attorney General Press Release.  Aside from being a Company Director, Ryan Blank's shady business dealings included court scraping as I documented in this January 31, 2015 post that showcases Blank's Prezi proposal to Atlanta based Fairfield Funding, and the use of a pseudonym Ryan Einstein which was fraudulently held out as having a Law degree and PhD from Yale. In addition Ryan Blank's Einstein Structured Settlements made shameful use of paid testimonials that were used in public facing promotions and routinely attempted to brandjack its competitors.

A search of the NAIC Producer database at the time of posting, shows that Ryan Blank holds no active insurance license in Alabama, Arizona, California , Connecticut, Delaware, District of Columbia, Florida. His Maryland insurance license expired in May 2012 and shows inactive. Ryan Blank is not listed a current or former investment adviser in the IAPD database.

Note: Settlement Advocates/Ryan Blank is not related to Kansas based Settlement Advocates of America. On February 10, 2020,  in an unsigned cease and desist letter to SAOFA, Blank's company claimed the other company was making unauthorized use of its trademark and claimed "under federal registration laws, we are the owners of the trademark..."

Federal registration of a trademark is the process for filing for federal protection of a mark representing a business or commercial activity. The federal statutes governing the registration of trademarks are found in 15 USC, sections 1051-1127. This group of laws is known as the “Lanham Act”. The registration process is managed by the US Patent and Trademark Office, a federal administrative agency.

When I performed a search of the USPTO Trademark Electronic Search System (TESS) database on July 19, 2020, there appears to have been no attempt to register " Settlement Advocates " or even its logo as a mark representing business or commercial activity.