As a British bobby might say " Hello, Hello what have we here?" What we have is a naughty boy getting hoisted on his own petard, sir.

The same day Milestone sent an email blast to trial lawyers all over America suggesting they should eliminate annuities from their client portfolios and settlement plans, John Bair published " How to Buy an Annuity" for CrowFly, LLC, his factoring company, in the CrowFly Legal Examiner.

Consider these two headlines both published by entities controlled or directed by John Bair on the very same day, April 20, 2020: 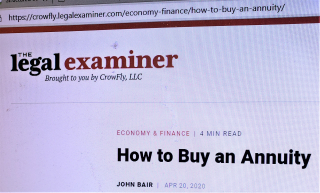 It is critical for readers to note that the target of both the blast email and Bair's blog post are personal injury trial lawyers all across America who have a steady supply of clients with annuities and both they and their clients (with a large enough settlement) are potential investors.

In my opinion, much more than hypocrisy is on exhibit here.

CrowFly LLC Offers What Its Director Bair Misrepresents as "Annuities", With No Insurance License?

Despite  being the director of an entity not having an insurance license in New York Download ALiS __ Producer Search CrowFly LLC NY DFS 4-22-2020, the following, authored by John Bair was published on April 20, 2020

"Consider a discounted annuity from crowfly(dot)com, as the yields of 4% to 5% are attractive and are from some of the most highly rated insurers. Buying a secondary market annuity also helps out another person who is in need or has fallen on tough times. There is a strong social impact of buying an annuity from someone else. Both sides of the equation win. Also, the yield to a buyer of a structured settlement annuity is a net yield; there are no ongoing monthly or annual expenses. Structured settlement annuities, or structured settlements, can be a great source of income. They are typically annuities and should..."