Annuity.Org on Annuity Beneficiaries | Another Epic Fail for Orlando Company

Annuity.org claims that " if there is no beneficiary on an annuity contract, remaining funds are surrendered to the issuing bank or financial institution".

Thus the Annuity.org suggestion that funds remaining in an annuity at the death of an annuitant who has not named a beneficiary, are surrendered to the "issuing bank" is just flapdoodle. Banks don't issue annuities. Who "surrenders the remaining funds"?

Beneficiaries For Annuities Other Than Structured Settlement Annuities 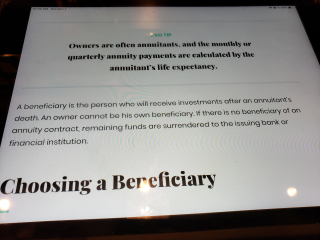 Annuity.org conveys inaccurately and irresponsibly, that banks issue annuities and that funds revert to the banks at your death if there is no beneficiary on the policy

Structured settlement annuities are never owned by the annuitant or payee. Generally they are owned by a qualified assignment company or, in a few cases, the defendant or its insurer.  The Annuitant is permitted to name and change beneficiaries, subject to submitting a request to the qualified assignment company or annuity issuer in proper form. There is usually a default provision that provides that in the absence of a named beneficiary, or a living named beneficiary, remaining guaranteed certain payments are paid to the estate of the payee, where they may be used to pay the debts of the estate. Any remaining payments following, are distributed to the decedent’s heirs subject to the decedent's valid will, or in the absence of a will, the decedent's state’s intestate succession laws.

Annuity.org is a dangerous place

Annuity.org is a dangerous place for consumers to go when seeking accurate information about annuities or structured settlements because it's cack-handed writers just fail to get it right time and time again.