A disgruntled former structured settlement broker's quest to take down AIG, has been nailed shut as the deadline to file Writ Certiorari has come and gone. 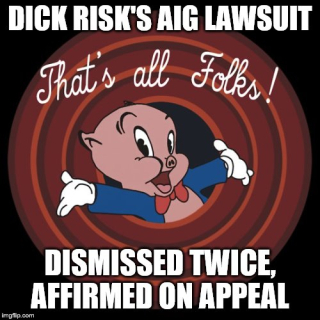 So a quest that started January 3, 2017 with Richard B. Risk, Jr, hitched up with a stud attorney, whose track record was promoted as if he was Seattle Slew, and failed like a wilted asparagus. They failed again on Appeal and finally collapsed entirely. The problem with promoting a stud is that the stud still has to perform and in this case, Risk just had no case, no room for the stud to gallop. It was more like a scene from "The Galloping Blase".

The law suit, formerly the " AiG structured settlement class action",  was so poorly pleaded in my opinion, for reasons that I've articulated here over the past two years. Even a layperson could figure that it wouldn't succeed.  The Appeal saw the lower court's dismissal affirmed in AIG's favor, with an opinion written by former Supreme Court Justice David Souter. Appellants did not ask for an en banc review of  the First Circuit's decision and now, according to  Supreme Court Docket September 13, 2019, they have not pursued the last remedy, writ of certiorari to see if the United Supreme Court would review the case.

What is Writ of Certiorari?

A Writ of Certiorari orders a lower court to forward all documents in a case it has heard to the higher court for review. While this is most commonly used by the U.S. Supreme Court, other courts, such as the U.S. Court of Appeals, state supreme courts, and state courts of appeal, may issue such a writ. The U.S. Supreme Court is very selective about which cases it will hear, accepting cases only when at least four of the justices believe the case raises a significant federal question that is in the public’s interest.

Supreme Court Rule 13.1 states that the deadline to file a petition for a writ of certiorari is 90 days from the date of entry of judgment by the the Court of Appeals.  The deadline was September 9, 2019.

Risk won't get the chance to gloat about AIG. Au revoir Monsieur Risk!