In the Middle District of Florida, it's already going "below the belt"

After promoting David Place as the guy "who wrote the book on lien resolution", Synergy Settlement Services is "throwing the book" at lawyer Dave Place for breach of 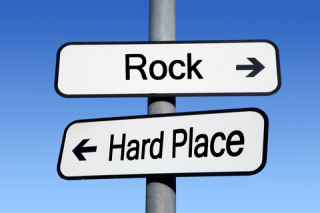 Between a Rock and a Hard Place

and the Florida Bar Association

Synergy Alleges in Its Complaint

From July 2012 to April 2019, Place was employed as Synergy's VP and Director of Lien Resolution. Place was responsible for managing Synergy's Lien Resolution Services and team in almost all states in the USA, including contacting and servicing Synergy's customers and expanding its services. Synergy alleges that for the most part Place satisfactorily perform his duties,  but in 2017 Synergy claims that Place violated its policies and Synergy commenced progressive discipline against Place. On April 22, 2019 Synergy terminated Place's employment for cause effective immediately,

Synergy seeks a 2 year injunction, the imposition of a constructive trust and  an award of liquidated damages.

Place alleged in his counter-claims (and sought millions in damages from Synergy, its CEO and other officers):

Synergy advertised on its blog that "Synergy's Dave Place Wrote the book on Lien Resolution", saying Liens in Personal Injury Actions  "was the only book of its kind in Virginia that is intended to help simplify the complexity that characterizes liens and to provide assistance to Virginia’s trial lawyers in securing the maximum net recovery for clients".  The actual list of authors includes Dave Place among at least ten authors and contributors.
ISBN: 9780820580371. Download Synergy David Place wrote the book - Google Search 8-25-2019

Synergy's counsel Gary S. Salzman, Esq. of Orlando's Garganese, Weiss, D'Agresta & Salzman, P.A., pointed out in a letter dated August 27, 2019, that the Florida Circuit Court entered an order on July 23, 2019, which dismissed the counterclaim of Dave Place and The Place Law Firm , PLLC. In the dismissal it states that Place had until August 19, 2019 to amend. Subsequent to the dismissal, on July 29, 2019, Place, signed and he and The Place Law Firm, PLLC filed for removal to the Middle District of Florida where it was entered on August 2, 2019. The caption in the 4 page  Document 1 on the Pacer record for the removal includes Place and The Place Law Firm as Third Party Plaintiffs and Synergy Settlement Services and the officers named above as Third Party Defendant. Download Pacer Doc 1 Synergy v Place Middle District of Florida.  However none of the attachments filed by Place and associated with document 1 referred to the dismissal. It appears that Place's counter claims will be refiled.

The litigation against Place and The Place law Firm is one of a pair lawsuits against individuals formerly associated with its heralded lien resolution team.  In the other lawsuit, filed April 2, 2019 in Orange county Circuit Court, is against William Nathan Parkey and Panoptic Insurance Group, LLC  d/b/a Panoptic Settlement Solutionss and Zipliens, LLC, Synergy seeks injunctive relief, compensatory damages, exemplary damages, and attorney ’s fees under the Florida Deceptive and Unfair Trade Practices Act and the Uniform Trade Secrets Act. According to his website, Parkey is Managing Partner and Chief Compliance Officer for Panoptic Financial Group, a Registered Investment Advisor, offering financial planning and investment services. Nathan consults attorneys and their clients across the state of Kentucky and select areas outside of the state.

That's Not All Folks!   There's another lawsuit pending

Dave Place sued Synergy Settlement Services Inc. Culpeper County Virginia back in the Spring for breach of contract.  According to the Bill of Particulars for the lawsuitagainst Synergy and filed exhibits: