Dan Reisinger, a Pennsylvania and Delaware insurance agent, solicited Woodbridge First Position Mortgages to clients that ended up being associated with a Ponzi scheme. As this image retrieved from the website of the National Association of Insurance and Financial Advisors -Delaware  clearly states, Reisinger is/was also a contact for Genex Capital.

Genex Capital Corporation is based out of a mailbox in Dover Delaware, but ostensibly operates out of Vancouver Canada. Though Assured Annuity,  Genex Capital markets factored structured settlement payment streams to investors with a misleading annuity label. despite knowing full well that the annuity is not transferred in a structured settlement factoring transaction. Genex Capital is one of the militant companies that persists in calling factored structured payment streams annuities despite a 2017 Delaware judge expressly stating they weren't. 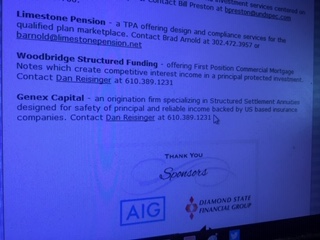 In a March 29, 2017 decision in Greenwald v Caballero-Goehringer, Delaware Superior Court C.A. No. K14C-04-027 JJC. a Delaware Superior Court judge rejected an attempt to portray structured settlement payment rights as an annuity in a minor's prove up hearing, stating. "The proposed "structured settlement" was described in the Third Petition as a structure to be purchased through a third party to be facilitated by a Houston, Texas law firm. The "annuity" proposed by the Petitioner was in fact a "receivable purchase agreement" which involved purchase of the rights of payment of a structured personal injury settlement from a California injured party having nothing to do with this case. In other words, the annuitant in the proposed plan facilitated by the Texas law firm was the California claimant, not the Minor. Furthermore, despite the Petitioner describing The Hartford as providing the annuity, the seller of the receivable purchase agreement was Genex Capital. No rating was provided for that entity in the petition. The Court denied the Third Petition, without prejudice"

Genex Capital is in a legal battle in Portsmouth Virginia that seeks to vacate a court order that would stop payments to its investor  [see Terrence Taylor v Structured Asset Funding et al.]

Reisinger's website no longer advertises the investments, but one wonders why a licensed insurance agent would be willing to put his neck on the online to push investments that are so clearly not annuities.