VA Delegate Stephen Heretick is At the Head of a Controversy

VA Delegate Stephen Heretick is a some piece of work. Instead of stepping aside (for an obvious conflict of interest) as counsel for Structured Asset Funding, Jay Gee LLC and Isettlements against, Terrence Taylor,  Virginia delegate Stephen Heretick exercised legislative privilege over and over and over again to delay Mr. Taylor's day in Court as the case has languished for almost 4 years.  [ Structured Asset Funding, LLC et al v Terrence E. Taylor  Portsmouth Circuit VA Case No. CL15-3022]. But for the circumstances of Heretick becoming an elective official, this matter would not likely have been delayed. Taylor is a black amputee burn victim who tragically suffered horrific burn injuries as a 6 year old child when a space heater caught fire in his parent's bedroom in a middle class neighborhood in Herndon, Virginia in 1988. A substantial structured settlement was established as part of the resolution of the lawsuit against the manufacturer of the space heater. The Washington Post's Lynda Richardson's contemporaneous report in January 1989 that gives a good picture of the impact of the injury on Taylor and his family here.

With Stephen Heretick at the helm as counsel in all 10 structured settlement factoring transactions in 24 months, clients of Heretick, including Structured 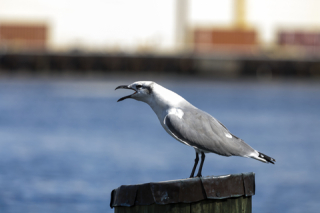 OK Boys and Gulls! Even this Portsmouth Virginia seagull is "squawking about VA delegate Stephen Heretick's obvious conflict of interest"

Asset Funding, ISettlements, Bexhill (Client First) and others were able to financially exploit Terrence Taylor for millions and millions of dollars. the exploitation of Terrence Taylor was so bad that the Washington Post made it a front page story in December 2015. Since September 2017, Heretick has been a defendant in a class action lawsuit as the central figure in an alleged "Annuity Fraud Enterprise" involving thousands of cases and thousands of victims. Even a layman can see that there seems no doubt that as the central figure in all of the Taylor deals approved in Portsmouth , Heretick would be called as a witness.

“I don’t take cases” he said, “that I have doubts about.”
But Heretick later clarified that statement. Had he known what he knows now, he said, there is a case he might have declined to take: “The Terrence Taylor case"  The flawed system that allows companies to make millions off the injured Washington Post December 27, 2015.

A Brief Recap of Proceedings

To reacquaint readers with the Taylor case, an action was originally filed by Taylor in Federal Court in Alexandria Virginia (where the original settlement took place) in March 2015.  Bexhill/Client First settled out. The remaining defendants mounted a Rooker Feldman response. Plaintiffs voluntarily withdrew the Federal action. Then SAF and the remaining others immediately filed a declaratory judgment action in Portsmouth to try and get a quick hometown decision. Taylor's camp subsequently countersued.

In November 2015, Taylor's counsel Edward Stone wrote to VA Delegate Heretick "We simply do not see how we can avoid calling you as a witness in this case. Terrence Taylor never appeared in Portsmouth for any hearings, via counsel or otherwise, and we are not aware of adequate alternative sources of information for the matters listed above".

1. Why certain petitions were filed under seal and at whose request or direction.
2. Why the various petitions were filed in Portsmouth and what you knew or should have known about Mr. Taylor's residence and domicile including but not limited to the circumstances surrounding the repeated execution of documents by Mr. Taylor in West Virginia.
3. What you knew about Mr. Taylor's physical or mental condition.
4. The circumstances surrounding the drafting and filing of more than 10 transfer petitions involving Terrence Taylor in Portsmouth by you.
5. In addition to the IO Petitions that were filed and approved in Portsmouth, what other Petitions involving Terrence Taylor did you file and then withdraw and why?
6. The level of inquiry you made or should have made as to whether or not all 10 petitions filed by you over a 24 month period complied with IRC Section 5891 and the Virginia Structured Settlement Protection Act.
7. The extent to which filing 10 petitions in 24 months involving the sale of structured settlement payment rights by one individual should have raised a red flag for you or SAF.

8. How many other times have you filed multiple petitions involving the sale of structured settlement payment rights by one individual who purportedly and systematically waived independent professional advice?
9. The specific representations you made to the Portsmouth Court about the Terrence Taylor petitions, including but not limited to what you told the presiding Judge about whether or not the transfer was in Mr. Taylor's best interest taking into consideration the welfare of his minor child and what you represented to the presiding Judge in each case about the Dismissal Order and Settlement Agreement and whether or not the transfers violated the Order of another court

10. What do you understand about the standard in Virginia for transferring structured settlement payment rights and to what extent did the Taylor transactions comply with this standard, including the requirements of IRC §5891 and the Virginia SSPA

11. How you came to represent both Jay Gee, LLC and SAF in connection with different petitions involving the same payment streams and why petitions were filed and then withdrawn and subsequently refiled by various transferees.
12. The facts and circumstances surrounding the drafting, negotiation and filing of certain Stipulations involving the New York Life entities.
13. The extent to which you communicated with or about Mr. Taylor.
14. The details surrounding the Alexandria Dismissal Order as an exhibit to one or more petitions filed with the Portsmouth Circuit Court.
15. The extent to which you reviewed the affidavits submitted in connection with the ten petitions filed in Portsmouth.
16. What you knew about the life insurance policies that were procured by SAF or their agents on the life of Terrence Taylor, including proving life requirements, net worth requirements

Heretick was given the courtesy of voluntary withdrawal as counsel. Heretick did not and arguably has made excessive use of legislative privilege to delay, delay and... delay the prosecution of a case that his clients brought against someone that they contend, and Taylor contests, was a Virginia resident. Then VA Delegate Heretick hauls off on the victim Terrence Taylor.

Heretick Blame and Shames The Victim

"That Taylor's motion to disqualify Plaintiffs' counsel is simply another dilatory, vexatious effort to district this Court from the essential nature of this case, to-wit, that Terrence Taylor lied deliberately and repeatedly to this Court under oath in seeking to sell his annuity rights in a significant number of transactions, and now, having squandered his assets on prostitutes, gambling, and drugs, seeks to blame everyone but himself for his conduct"

An Irreverent Diversion   "Where Are They Now?"

Wadsworth represents on LinkedIn, that he is President of WePayMoreFunding LCC. LCC apparently  being a "new form of business entity", perhaps short for jump in a "Lakeshore Country Club". Jump in and see your structured settlement go "Later Gator"

Heretick (continued)   "Taylor again attempts to argue that the transfers he requested were barred by the terms of his confidential settlement agreement in the underlying federal tort case which resulted in the funding of his annuity. This Court must recall that at the various times that Taylor initiated his multiple requests for structured settlement transfers, certain documents were missing from the federal court's file, and were therefore unavailable to the Plaintiffs. To assuage Plaintiffs' concerns, Taylor issued sworn statements that such documents did not contain any prohibition against assignment. Subsequent to the transfers this Court approved at Taylor's request, and without notice to the Plaintiffs, Taylor's attorneys undertook a surreptitious, ex parte proceeding in the United States District Court for the Eastern District of Virginia in Alexandria, seeking to replace the missing documents in that court's file. Taylor's counsel then represented to this Court that such documents were actually there all along, intimating that Plaintiffs either failed to exercise due diligence in failing to detect these documents, or had otherwise intentionally misrepresented their contents before this Court. While this Court has declined to sanction Taylor's counsel for this serious misconduct, it remains inescapably true that only Taylor and the New York Life companies had actual and constructive knowledge of the actual contents of these documents, and did not object in any way to any of the transfers sought by Taylor when they received due notice of each of those proceedings".

Heretick blames everybody but himself and his clients as one might expect.

Judging by the timeline, Heretick's perhaps excessive use of legislative privilege as a Virginia delegate, has bought his clients time to become a shadow of their former selves while they continue collecting Taylor's huge annuity.  Perhaps that's about to change.

An interpleader action was filed by New York Life seeks to direct those payments from New York Life to instead  be held by the Court pending resolution of the matter. A hearing will take place on April 30, 2019 to deal with the interpleader, the motion to disqualify VA delegate Stephen Heretick as counsel (for what seems again like an obvious conflict of interest) and a motion by Genex Capital to remove the case from Portsmouth Circuit court.

It is in the public interest that this case be heard and that the mainstream news media cover the case. People need to have faith in the system. Shortly after Terrence McCoy's Washington Post report was published on December 27, 2015, the structured settlement protection act in Virginia was amended.