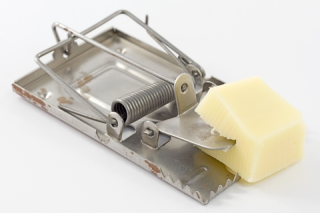 Scare tactics are a "cheesy mousetrap"

DRB Capital's specious marketing strategy to structured settlement annuitants included scaring an annuitant that the life insurance company could go insolvent.   In a September 2016  ad on the CT disclosure to Nakeitha Makeba Rose of Bridgeport CT,  DRB Capital attempted to justify its discount rate by summoning up the ghosts of AIG and Lehman Brothers from 2008. What a pity that yet another member of the National Association of Settlement Purchasers scrapes the bottom of the barrel with this "cheesy mousetrap".

" Structured settlements are only as good as the insurance company that has to make payments. In 2008, AIG International, one of the largest insurance companies in the world came within days of becoming insolvent and going under-it was only a gigantic loan of some $178 billion dollars from the US Treasury that saved the company. The same couldn't be said for Lehman Brothers, a multi-billion dollar global financial firm that filed for bankruptcy around the same time. Lehman Brothers could trace its roots back to late 1800s but, in just a week, became insolvent and filed for bankruptcy. In a structured settlement transaction that kind of risk is passed from You to purchasers like DRB."  -Superior Court CT Judicial District of Bridgeport Case FBT-CV17-6062054

Specious  "Having deceptive attraction or allure"

Why Was DRB Capital's CT Disclosure to Nakeitha Rose Misleading?

I came across the Nakeitha Rose case during the course of my ongoing investigation into discount rates charged by Novation Funding LLC ,generally set forth in statutory disclosures.  Nakeitha Rose applied to sell structured settlement payment rights in life contingent payments totaling $335,291.82 for $40,155 in cash.  It turns out In the subject case which I have cited above, DRB Capital intervened, alleging that Novation Funding tried to poach a deal already under contract to sell, albeit for $5,000 less ($35,140.04)

Ironically as part of the add on to the CT statutory disclosure, DRB Capital says "As with most things, the true market value of the payments is what a buyer is willing to pay", thus confirming that DRB  Capital was not paying, by its own definition, "true market value"

If you have done business with any structured settlement factoring company and they have used the same language as was done with Nakeitha Rose, please submit a report to the Structured Settlement Watchdog®