Genex Capital advertises that the "Assured Annuity™ is a contract providing for the payment of a sum of money payable either monthly, yearly, in one lump sum at a future fixed date, or a combination thereof. These payment rights were originally paid by insurance companies to personal injury victims pursuant to a structured settlement".

Despite the fact that Genex Capital admits that what it markets to investors on the Assured Annuity website is structured settlement payment rights, defined at IRC 5891(c)(2), Genex Capital states:

Another misrepresentation by Genex Capital

"Since registration with the Better Business Bureau in 2008, we (Genex Capital) have always maintained the highest A+ rating with zero complaints.

FACT:  As you can clearly see, at the time of publication Genex Capital IS NOT rated or accredited by the Better Business Bureau. 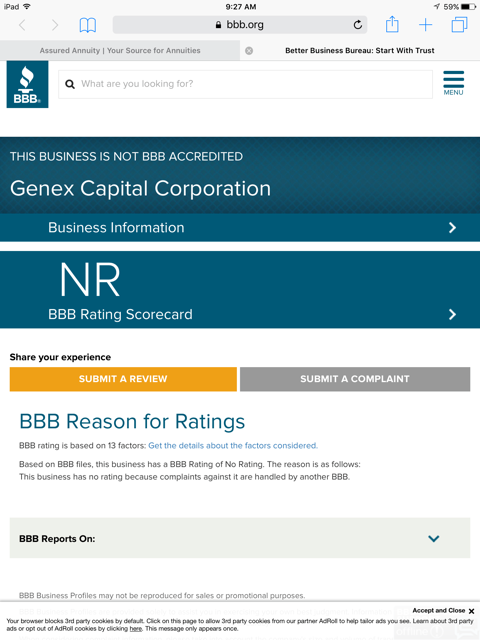 Despite Genex Capital 's claim that it has been continuously been rated A+ on its Assured Annuity website (that appears intended to curry favor with consumers), Genex Capital is currently not rated or accredited by the BBB

Genex Capital says :  Paying for a child’s education with a fixed annuity is a great way to make it easier to pay the costs of college

Why is Genex Capital soliciting United States consumers with the annuity misrepresentation. The companies meta tags claims to be "your source for annuities" The home page suggests that  Genex Capital relies on the Merriam Webster  definition of annuity

The definition of annuity offered by the CT Insurance Department, a state in which Genex Capital and members of its group have done business**,  says " an An Annuity is a contract in which an insurance company makes a series of income payments at regular intervals in return for a premium or premiums you have paid. Annuities are most often bought for future retirement income, and can pay an income that can be guaranteed to last as long as you live"

**the basis is that Genex Capital's SSQ lists an address in CT at a Regus Office Center and has a claimed Yelp listing at that address. Genex Capital advertised in 2009 that it was voted one of the Best in CT by the CT Law Tribune's readers.

On month on, Genex Capital now has an A+ rating but Genex Capital is still falsely advertising that it is an Accredited BBB business.