How is it that Genex Capital CEO Roger Proctor supposedly owns an Island property in the Pacific Northwest and a condo at the Fairmont Pacific Rim, yet apparently can't find two nickels to rub together to update inaccurate information on the SSQ website that were posted in 2012. Yet somehow enough attention to detail is mustered each year to count the number of fannies at the Wreck Beach Preservation Society's annual skinny dipping contest as a sponsor and judge. 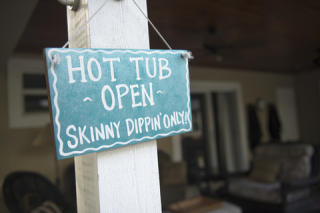 If Genex Capital just devoted as much effort as Roger Proctor puts into judging the number of fannies on Wreck Beach each July before forking over C$5 each for charity, consumers would be better informed

Structuredsettlement-quotes (SSQ), an online structured settlement factoring website associated with Genex Capital in Vancouver,  has, for almost 5 years, attempted to exploit billions that major insurers spend on advertising and branding.  By stuffing its website with page after page of listings of information about life insurers and liability insurers, the majority of whom DO NOT even issue structured settlement annuities, the StructuredSettlement-Quotes(dot)com website ploy appears simply to seek search engine juice.

Links to the current ratings from Standard & Poors as well as other rating agencies can be found here.   Here is the actual write up from S&P On NY LIfe Insurance Company.

When it comes to American General, Genex Capital/SSQ is also "el stinko"

Genex are right berks when it comes to Berkshire Hathaway Life of Nebraska too. Looks like nothing has been updated in 5 years. The company address is wrong. The outlook is not negative and the last rating action was more recent than 2010.

Aviva Life has not existed since October 2013 when its acquisition by Athene Holding Ltd was concluded.

MetLife Insurance Company of CT was folded into another entity

This isn't the first time that Genex Capital has been called into question on website inaccuracy.