An Oregon intermediary selling structured settlement derivatives using the secondary market annuities scam label, provides clues that all was not right with how these derivatives were being marketed to consumers. 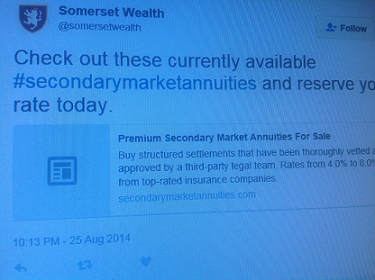 I guess "thoroughly vetted" was not meant as an absolute

What does throughly mean? According to the Oxford dictionary, throughly means rigorously, in depth, exhaustively, minutely, closely, in detail, meticulously, scrupulously, assiduously, conscientiously, painstakingly, methodically, carefully, comprehensively, fully, from A to Z, from soup to nuts.

Then it emerged that Somerset had been the intermediary on one or more Access Funding deals. with investors. First Somerset Wealth suspended sales of structured settlement derivatives in 2016. Then it emerged in February 2017 that at least one senior, a 66 year old Florida resident who contacted me after she received the devastating news that her payments would be suspended due to competing claims arising out of the Access Funding litigation.

In 2016 I learned of other cases where Somerset was an intermediary that were acquired from another now defunct entity. Upon information and belief there were questions about the validity of one or more of the transfer orders obtained. To complicate matters the investors in the payment rights acquired from the defunct originator were tied to members of the structured settlement primary market. Very sticky situation indeed.

The obvious conclusion to draw from his example is is that "thorough vetting and approval by a lawyer" is not an absolute to address potential risks  ( risk that may not be completely disclosed).

Consumers are hamstrung by the lack of regulation of sales practices when it comes to the secondary market, and the lack of legal expertise in this subject matter that is not already on the factoring industry's payroll. Then there is the issue of how the lawyers who do have expertise get paid. It's tough to incentivize a lawyer if there's no "golden egg" at the other end.

Recently Somerset CEO Tom Hamlin reached out to the 66 year Florida resident and purportedly felt a need to bad mouth me saying that I was just "trying to make a name for myself". Meanwhile the payments that she thought were acquired for $150,000 in retirement money are suspended and in serious jeopardy. If looking into why that happened is to be seen as bad, I'll take it any day. When you consider how these investments have been marketed, that is not supposed to happen. The question is was it reasonably foreseeable? One thing we do know is that origination risk is often not disclosed to investors in structured settlement derivatives using the secondary market annuity scam label.

Part of my pro bono mission as structured settlement watchdog is to help curtail the ongoing wholly misleading misrepresentation of factored structured settlement payment rights as "annuities", secondary market annuities", or through snappy but misleading acronyms such as SMA, SMAP, and SMIA to investors by salespeople and their companies, including some who have insurance or securities licenses who should know better; help curtail the insinuation that investors in such structured settlement derivatives enjoy the same statutory protections as buyers of legitimate annuities; encourage the disclosure of transaction risk/origination risk that has been absent in the sales materials of many of these salespeople.. Failure to disclose such material risk is inexcusable